Last week, it became abundantly clear that the resurgent Covid-19 surge in the state of New York was no joke; simultaneously, accounts on social media began to pour forth indicating that many attendees of this year’s Art Basel Miami had contracted the virus either at the fair itself or at one of the satellite events and parties. In the aftermath of the globally attended fair, participants are taking stock of what they managed to accomplish during a marathon event that included NFT-laden exhibitions and panels, excited collectors and yes: risky behavior for a world that’s still in the midst of a pandemic.

Elena Zavelev, the founder and CEO of the Contemporary and Digital Art Fair (CADAF), participated in several different panels related to digital and crypto art and came away stimulated by the conversations she’d had. “For me, it’s really interesting to see that one of the problems with curating digital art is that there are still very limited ways to display digital art in a public setting,” Zavelev told Observer last Friday. “Artists and curators struggle a little bit with showing digital art in great resolution on appropriate screen sizes.”

Additionally, Zavelev said, “there’s really a lot of interest from traditional collectors in digital art, which is fascinating. Even a year ago, I couldn’t have imagined it.”

For all the progress that’s been made at Basel Miami in the digital art sphere, there’s also no doubt that the industry wins were coupled with a wash of ill-timed infections. “[The] entire crypto community is wrecked right now,” an anonymous source told Observer last week.

Ian, a representative for the Art Handlers Alliance who asked that his last name be omitted, was also in attendance at Art Basel Miami 2021. Contradicting other firsthand accounts, Ian told Observer on Monday that mask-wearing in the Miami Beach Convention Center was spottily enforced. “Opening day, which was the VIP day on Tuesday, a few hours had gone by and I was becoming frustrated at how much I was seeing people not wearing masks,” Ian said. “Two hours later, security guards that weren’t affiliated with Art Basel’s parent company would hand out masks if they saw anyone that didn’t have a mask on. You would see people throw masks in the garbage, you would see them on the floor.”

“Throughout the fair if you wandered around, you would see every type of worker, even down to Miami police, hiding in corners with their masks off or turning their backs to the wall so no one could see them,” Ian added. “All sorts of means of trying to not use the mask.”

“The whole working situation was a failure compared to [Art Basel Switzerland] during the summer,” Ian wrote to Observer over Twitter DM. “So much so that we are advocating that workers not work there next year, if we are still under similar pandemic conditions.” 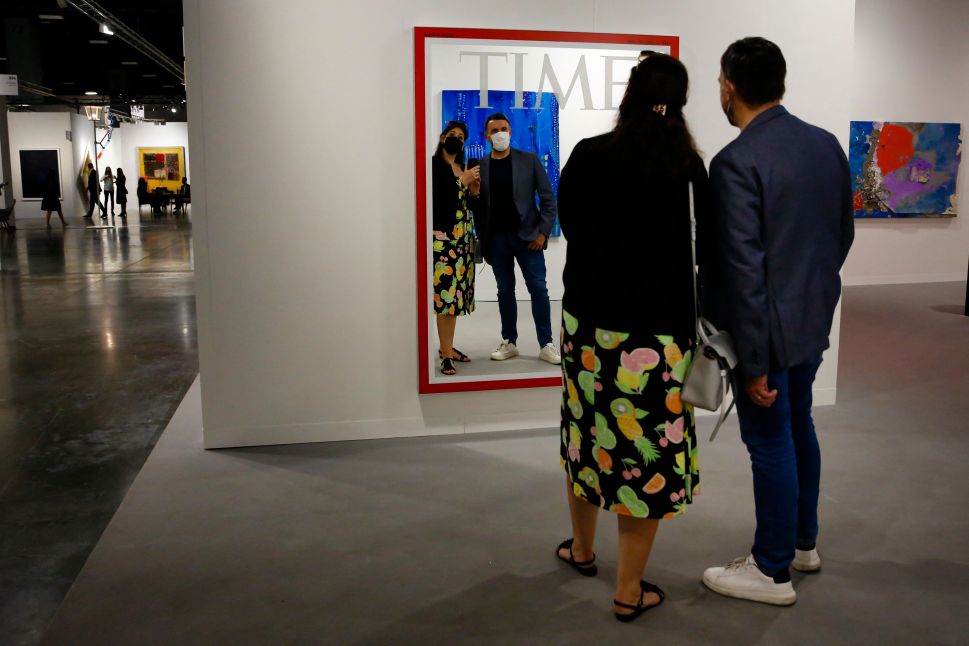