It’s hard to look away when these many stars align—even if the constellation is a smug, self-satisfied middle finger toward everyone and no one. The cast of Don’t Look Up could fill out the ballroom at the Beverly Hilton: Leonardo DiCaprio and Jennifer Lawrence play astronomers who discover a meteor will strike the Earth in six months, causing a Chicxulub-like cataclysm. Meryl Streep plays the President of the United States, who, at first, doesn’t take them seriously. Jonah Hill plays her Chief of Staff and large adult son. Mark Rylance plays a mousey tech CEO who cozies up to her. Cate Blanchett and Tyler Perry play the hosts of a hive-inducing morning show, and the rest of the ensemble is rounded out, in no particular order, by Ron Perlman, Rob Morgan, Ariana Grande, Kid Cudi, Himesh Patel, Matthew Perry, Chris Evans, Melanie Lynskey, Gina Gershon, Paul Guilfoyle, Michael Chiklis, Tomer Sisley and Timothée Chalamet.

The enormous cast is matched by enormity of scale and foreboding, beginning with the realization of what’s to come. Short-tempered Michigan State PhD candidate Dr. Kate Dibiasky (Lawrence) excitedly discovers the unique comet, before her nervous professor Dr. Randall Mindy (DiCaprio) makes the stunning calculation that all but seals their fate. They enlist the help of NASA’s defense coordinator Dr. Clayton Oglethorpe (Morgan)—who fast-tracks them to the Oval Office—and the film sets its tone with a peculiar flourish, though one that works wonders at first. Dibiasky and Mindy’s journey to the White House is presented in jumbled order, interspersed with their confusion and denial in the immediate wake of the discovery.

Scenes, sentences and thoughts are cut short as the film lashes back and forth, placing us in the shoes of the leading duo and their inability to fully process the information, as they get roped into a web of selfishness and ineptitude—into an anti-The Martian. It feels, for a moment, as if director Adam McKay and his editor Hank Corwin have stumbled upon an aesthetic masterstroke, but before long, this acutely stressful approach is applied indiscriminately. Scenes transition mid-sentence for the sake of laughs, which also works at first, but soon the film begins to lose any sense of rhythm; it feels discordant even when it ought to slow down, take a breath, and focus on a single scene or emotional idea.

Co-written by McKay and journalist David Sirota, the film borrows time by focusing on the overwhelming media spotlight on Dibiasky and Mindy. However, its frantic, splintered nature—it features numerous brief cutaways, including dozens of reactions from all over the world—can only be arresting for so long. These shots are mostly stock and second-unit footage, of celestial bodies and the many people and animals at stake, but their assembly is more logistical than impressionistic; they tell you that people are sitting in front of their TVs and watching the events unfold, but not what they’re actually feeling. McKay and Corwin’s part-video-essay approach, which was fleeting enough to work in Vice and The Big Short, becomes both scattered and overbearing here.

The cast is admirable and witty across the board, especially DiCaprio, who carries himself with an anxiety-inducing combination of anger and helplessness that feels all too familiar. The film, conceptualized as a dramatization of the politics of global warming, found itself up against an even more pressing problem when production coincided with COVID-19. However, its focus on the fissures within modern America isn’t quite as exacting as some of its character-centric satire. Streep’s opportunistic President Orlean is certainly fun, but the lack of similar focus on her followers—who take to chanting “Don’t look up!” as the comet approaches—results in a political portrait that remains frustratingly incomplete.

For a number of years, there were two Adam McKays: the Adam McKay of studio comedies like Anchorman and Talladega Nights and the Adam McKay who took explicit aim at systems of power, via dramatic satires like Vice, The Big Short and the HBO series Succession (all of which use the documentarian style McKay taps for Don’t Look Up). The overlap is apparent: both sets of works are born, at least in part, from frustrations at the broad strokes of American conservatism—its politics, its culture, its media. However, a third Adam McKay briefly threatened to subsume the first two in the strangely wrong-headed post credit scene of Vice, McKay’s film about Vice President Dick Cheney, in which a focus group comes to blows, and a pair of participants look away from the action to discuss the latest Fast & Furious movie.

The scene is a jab at those who bury their heads in the sand and let media and entertainment obscure their view of naked political atrocities. This point of view that runs throughout Don’t Look Up, in which simpletons at risk of catastrophe are brainlessly distracted by the pop idols played by Grande and Cudi. But while the powerful are satirized in a manner that hits at their hypocrisies and insecurities, the everyday people who are the butt of the joke are rarely afforded the same depth or consideration. And given its star-studded cast, the film feels like an embodiment of the celebrity-gazing it hopes to shame. It loves its stars, but towards most other people, it can’t help but feel misanthropic.

Don’t Look Up feels half-realized. It aims to expose (or caricature) the “why” of mounting political disasters, but it inadvertently frames the outcome of bad-faith politicking as a de-facto, cyclical result of itself, rather than of pre-existing fears and conditions being stoked. It frames most regular people—even the worst straw-men it can conjure—as an extension of the powerful, and of a social-media tapestry that exists to reflect the powerful’s actions, rather than as a group of individuals with agency, whose ideas and opinions, even at their ugliest, can be molded and manipulated. It doesn’t so much satirize them as reduce them. One could argue it needs to be kinder or more understanding to present a more challenging drama, but one could just as easily argue that it needs to be exponentially more vicious and more detailed in its takedown—“know thy enemy,” and all that. It fails to do either, so its political outlook ends up limp and noncommittal.

However, where it ultimately succeeds is in exploring its handful of primary characters, namely Mindy, Dibiasky, and a disaffected skater played by Chalamet, whose brief and hilarious role also ends up surprisingly touching once the reality of the situation sets in. The film has little to say about the American political spectrum beyond expressing frustration at its gridlock—which, at the very least, affords DiCaprio the chance to channel Peter Finch in Network—but it occasionally approaches poignancy in its quieter moments, which are about what happens once the apocalypse becomes truly unavoidable (in this way, it pairs nicely with the recent Kiera Knightley comedy Silent Night). For a film to find glimmers of beauty amidst such bleakness is nothing if not commendable, but Don’t Look Up also doesn’t achieve this until well into its 145 minute runtime. Ironically, it may be too little, too late. 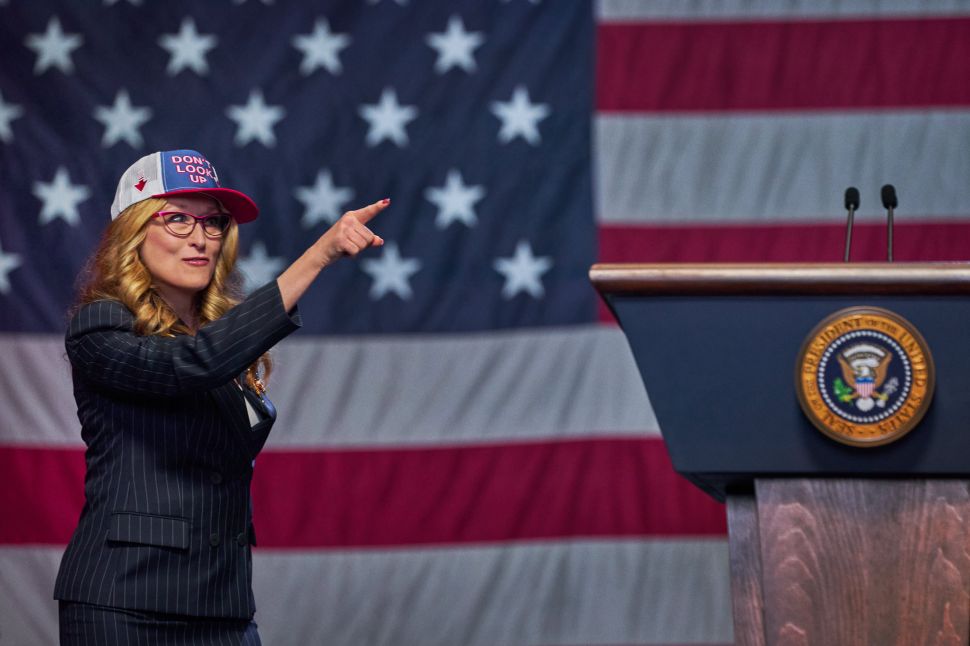