Covid or no covid, new musicals continue to arrive in New York.  There has been nothing to write home about, drag an extra mask around, or max those credit cards for.  They close as fast as they open. This week’s offering at Lincoln Center’s Vivian Beaumont Theater is called Flying Over Sunset.  The title doesn’t have anything to do with being over Los Angeles in a plane, instead, it defines the state of mind of some people in 1950s Hollywood who were stoned out of their gourds on LSD.

Three such people playwright-director James Lapine chooses for this dated experiment in chemically induced alternate reality are rich, powerful, and famous—suave, debonair screen legend Cary Grant, spiritual and psychic literary icon Aldous (Brave New World) Huxley, and Clare Boothe Luce, renaissance woman, queen of cafe society, editor of Vanity Fair, U.S. diplomat-war correspondent-Republican ambassador, and author of The Women.  Joined by gay New Age scholar and LSD guru Gerald Heard, who acts as the guide on their journey to self-enlightenment, this formidable foursome gather at her lavish beach house in Malibu to smoke, drink, and subject the audience to what is supposed to be clever, talky and quotable gossip about the people they know. Mostly they just sip martinis and contemplate their navels. It’s like spending weeks with Truman Capote, wallowing in self-indulgence while he dictates Answered Prayers to a tape recorder.

The play is careful to label itself a work of fiction.  We know the four participants actually experimented with LSD to seek and explore a deeper understanding of their inner selves. The rest is pure conjecture. Huxley, we are told, could only see out of one eye, so he turned to chemicals to see what he could not see.  Cary Grant did it to feel what he could not feel. Luce wanted to overcome her reputation as a tough dame, discover her softer, more feminine side, and save her marriage to publishing tycoon Henry Luce, who founded TIME, LIFE and FORTUNE.  If you can believe it, she was sick of being the Woman of the Century. In short, they all needed to discover what they had been missing in life. Cary Grant took LSD because his wife at the time, actress Betsy Drake, encouraged him to better analyze the failed lovers in his life. Superficially, Barbara Hutton is mentioned, and Randolph Scott. The play is about how they all sought answers to their assorted miseries while sitting around the pool in the lotus position (Mrs. Luce sacrifices a forthcoming appointment as ambassador to Brazil, Huxley learns how to cope with the death of his beloved wife, and Cary Grant retires from the screen).  Between psychological searches, they all sing a batch of grim and tuneless bores that will not send you home singing along —unless you love to rhyme “penis” and “Venus” or “smelly” and “Botticelli.”

I am surprised that the lackluster score of Flying Over Sunset features lyrics by the same Michael Korie, whose outstanding work in Grey Gardens featured some of the best songs of the past decade. The same splendid talent is not in evidence here. The songs in this tedium lack the Tin Pan Alley appeal of Jerry Herman and Cy Coleman and the majesty of Bernstein, Sondheim and Comden and Green.  Alas, what can you do with songs called “Bella Donna Di Agonia” and “Om”?  The drab melodies are by Tom Kitt.

The cast is fine, although only the seasoned Tony Yazbeck, who plays Cary Grant with the proper mix of insouciance and self-doubt, has enough enduring appeal for singular praise. With no star power, no popular origins, and no spectacular stage effects to generate word of mouth, the fate of a minor trifle like Flying Over Sunset doesn’t look healthy. After all the LSD they consume, the celebrated bores reveal no sign of pharmacological revolution.  They’re as miserable and confused at the end of the show as they were in the beginning; we learn nothing about them we didn’t already know going in, and we go away yawning.  For what it’s worth, even at its lowest ebb Flying Over Sunset  is better than the numbing Mrs. Doubtfire, and more palatable than the despicable new revival of Company.  That is not a recommendation. 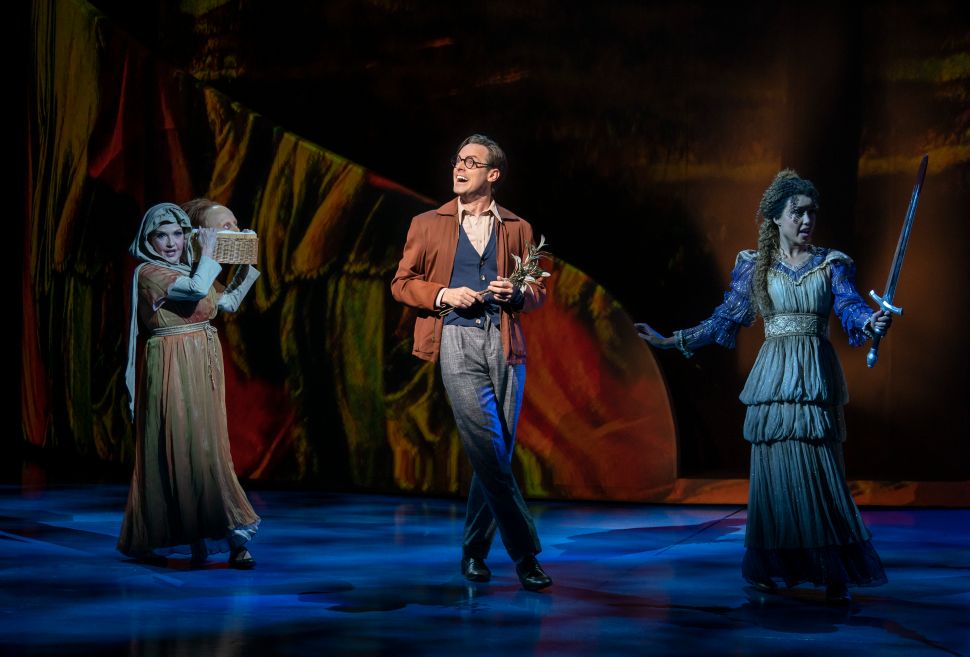