Japanese fashion mogul Yusaku Maezawa is vacationing on the International Space Station this week. The 46-year-old billionaire is the first self-paying civilian to visit the space station since 2009. In an interview with the Associated Press on Monday, he confirmed the range of price he’d paid for the 12-day journey and responded to criticism that he could have put the money toward solving more urgent problems on Earth.

Maezawa’s space trip is organized by Virginia-based Space Adventures. The same company had sent seven other tourists to the space station in 2001-2009. The exact price for his trip is undisclosed. Reports cited by the AP claimed he had paid over $80 million, which Maezawa said was “pretty much” the amount he’d paid.

“Yes, it is still rather expensive, but it is not only about money,” the billionaire said. “It takes time for your body to adjust in this environment and the training for emergencies takes at least a few months. So, honestly speaking, it is only accessible for those who have time and are physically fit and those who can afford it. But we don’t know if that is still going to be the case in 10 years, 20 years’ time.”

Unsurprisingly, those comments sparked some controversy on social media. Under a link to the interview posted on the AP’s Twitter page, some users bashed him for doing nothing to help people in need on Earth, while others said that it’s “his money, his choice.”

Maezawa blasted off into space in the early morning of December 8 from Baikonur Cosmodrome in Kazakhstan and arrived at the ISS later that day. He was accompanied by his 36-year-old assistant Yozo Hirano, who’s tasked with documenting the whole space journey, as well as Russian cosmonaut Alexander Misurkin.

Since docking at the space station last week, Maezawa has been posting photos and videos of his experience on social media.

On Saturday, he posted a time-lapse video of the space station orbiting around Earth. “This is exactly an entire orbit around Earth. Breathtaking.” he tweeted.

Took a time lapse of Earth from the ISS window.
This is exactly an entire orbit around Earth. Breathtaking. pic.twitter.com/54L8lwdmLr

On Sunday, he posted a four-minute video on YouTube demonstrating how to use the bathroom on the space station.

In another video posted Monday, Maezawa was seen struggling to stay still while floating in zero gravity.

His latest YouTube share, posted on Tuesday, is a video of him brushing his teeth for three minutes straight in space. 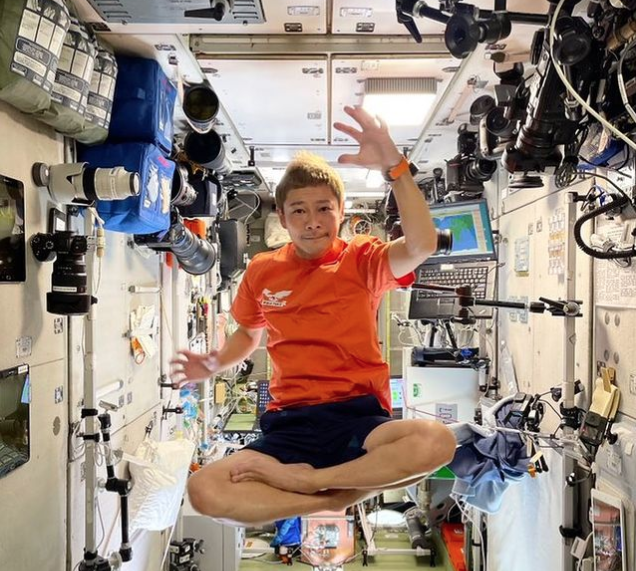