Last spring, Eliza Bennett had just bought a house in Los Angeles with her husband, James Charlton, when she got a call to audition for the part of Amanda Carrington on the CW’s Dynasty reboot. The English actress—who rose to fame as a child actor in the fantasy family film Inkheart and later as one half of MTV’s short-lived comedy-drama series Sweet/Vicious—had never watched either iteration of the primetime soap opera. But her parents, who were big fans of the ‘80s original, knew exactly what she was signing up for as the latest long-lost relative to arrive on the Carrington doorstep.

“I was wearing fake eyelashes in my audition, which I don’t normally do, but I did for Dynasty,” Bennett told Observer with a laugh. “I definitely was trying to nail the style of the show as much as possible.”

Within a week of her audition, Bennett discovered that she had not only booked the role but would have to commute between Los Angeles and Atlanta, where production takes place for nine months of the year. “I dragged my husband to L.A. three years ago. And then I got the show, so I was like, ‘Guess where we’re going—somewhere where you don’t have any friends!’” she said. “It really was a whirlwind without much time to think about what was going on. And before I knew it, I was in my first costume fitting.”

In a video interview from Atlanta, Bennett spoke exclusively with Observer about the challenges that come with joining such a beloved show, her close friendship with co-star (and onscreen sister, Fallon) Elizabeth Gillies, and Amanda’s descent into the soapy, power-wielding world of the Carringtons.

Observer: In an interview with Zach Sang, Liz Gillies revealed that she actually came up to you and introduced herself once she found out that you were playing her sister, which she doesn’t normally do for her other cast mates – just ask Adam Huber! What do you remember from your first meeting?

Eliza Bennett: Yeah, she told me that story about Adam and I couldn’t believe it. (Laughs.) I was like, “What do you mean you didn’t talk to him for three episodes?” She was like, “I don’t know. He didn’t really make an impression.” And it’s funny because Adam is so lovely, and now they’re such good friends.

I was in a coffee shop the first time I met Liz, one of her favorite coffee shops—Brash in Buckhead. She came up to me and was like, “Hello! I’m Liz, and you’re playing my sister.” She is the heart and soul of the show—so many of the fans are in love with Fallon. So I was overjoyed that we got on so well—maybe because we’re similar in age or the fact that we were both child actors. I felt like we had a lot in common, and it’s been lovely working with Liz. The more time I spend with her, the more I love her.

There is certainly a little bit of friendly fire between Fallon and Amanda when they first meet, but they seem to respect and understand each other. How would you like to see that relationship evolve?

The scenes I did with Liz last [season], it was fun watching them air because so many people were loving Amanda and Fallon’s relationship. I think Fallon needs a female family member that she has a lot of respect for and is as fiery as her, but also encourages her to loosen up a bit, which I Amanda did. I hope the next season we see a little bit more of that, but I have no idea!

I know you’re also passionate about music. Could we ever see you singing on the show with Liz?

I would love to! I know Liz has been like, “You should do a song with me, Eliza. . .” We’ll see if the writers bite. I know the show does it quite a lot, and when I was younger, the musical episodes of TV shows were always my favorite—Buffy the Vampire Slayer, Scrubs. It would definitely be a tick off my bucket list to be able to do a musical episode.

Amanda might be on better terms with Fallon right now, her relationship with Adam (Sam Underwood) could not be more contentious. While it’s great to see Amanda go toe-to-toe with him, will she ever discover his dark side, especially after what he did in the last season finale?

Well, Amanda was on to him almost immediately, and I don’t think she likes letting bullies get away with things. It’s funny because she’s seen a little bit of Adam, and she already is not letting any of that rest, and we’ll start to see in Season 5 that that just gets more and more heated. I can’t even imagine what would happen if she found out everything that Adam has done. (Laughs.)

Does Amanda know about her other sibling, Steven (James Mackay)? No one has seen him since Season 2, and it feels like we need to complete this circle of Carrington siblings.

I know, and I’m one of those people. I don’t know either. I think Amanda is fresh in the world and is just knowing the world as it is. I don’t know whether that will be handled at some point, but I’m sure she’s aware that he is in Europe doing whatever he’s doing. But I’m probably not the one you should ask. You should get a writer in here and pin them down!

Amanda is an interesting character study in this idea of nature versus nurture. Does being raised in a different environment from the rest of the Carringtons give Amanda a better sense of morality, or is she really a Carrington through and through?

I think she naturally has some Carrington traits, but I think it’s interesting watching her come in with a fresh view on everything. Within about four episodes, she’s pointed out the problems in Fallon’s marriage, she is saying that she doesn’t think that Adam is a very good guy. I think she can see that her mum [Alexis, played by Elaine Hendrix] is actually quite insecure under all of that insanity, and she has compassion and love for that, and she can see that her father [Blake, played by Grant Show] tries to control the children too much and is too focused on success. So I think she has this fresh world view when she comes in. Whether she can hold on to that, when this becomes her entire bubble for too long, will be interesting to see. If she can keep her sanity, I’ll be impressed.

This show is incredibly popular internationally, especially in Europe. What kind of feedback have you received from fans, your family and your friends?

The fans have been so, so nice. You never really know how your character is going to go down when people love the show so much that it feels like they have a little bit of ownership over it, so you’re always hoping that you’ll get the seal of approval. Overall, everyone has been so nice about Amanda . . . and at least I’m reading only the good comments so far. (Laughs.)

It’s so funny to me that the show is so huge all over the world. I wonder whether it’s like how so many Americans are obsessed with Downton Abbey. The show is so un-British that I feel like people love diving into that world, and it’s something that’s not really on our television screens. My husband went back to England and spent some time with some of our friends that we grew up with, and they all watch the show, which I was so shocked [about]. So many of them are fans of it, so it’s really been selfishly really lovely for me to have a show that my friends and family from home are excited about.

We can’t talk about the show without talking about the costumes. What has it been like to enter this world with Arin Burke, your costume designer?

Arin is unbelievable. I’ve never done a show in which I get to wear clothes like this. The little girl in me loves to dress up. Firstly, I had to learn how to truly walk in stilettos comfortably. I think Liz told me that she stopped having any feeling in her toes about halfway through the second season. She can wear any shoe for however long, and I was like, “How?” And she was like, “Oh, they’re dead! There’s no nerves.” (Laughs.) So I’m trying to learn all of those things. I’m learning to wear spanx—that’s very pivotal on the show—which I’ve never done before, so those things have been learning curves.

This season, in the second episode, I got to wear an Oscar de la Renta gown. I wear it for one scene, but I was just rolling around. I was so happy in it, and it was so beautiful! And eating lunch is quite stressful, because you’re like, “Wow, if I spill this tiny bit of food on this $7,000 gown, I’m going to be in trouble.” (Laughs.)

After Fallon did some digging into her past, Amanda revealed that she had an affair with a female judge named Florence that eventually led to her dismissal from a prestigious law firm in the U.K. Would you be open to Amanda finding love in Atlanta? What kind of person would be the right fit for her?

Of course I would be open to Amanda finding love! I think she could do with having someone on her side who maybe will bring out her more emotional and romantic side. I don’t know for certain who that woman may be, but I’m excited to find out. Because when you see someone fall in love with someone, there’s always this vulnerability and intimacy, so it’ll be interesting to see that side of her.

What can you tell us about the two-hour holiday special?

The episodes that come out on [December] 20th are going to be a wild ride. You’re going to see Amanda and Adam go toe-to-toe—I think a lot of people want to see someone stand up to him. So hopefully that will go . . . well. (Laughs.) You also see Amanda and Alexis’ relationship really grow. I know Alexis is obviously an insane person as well, but I think it’s nice to see her have someone on her side and to watch her soften with one of her children. For my storyline, that is what we have to come. But obviously, we left Season 4 on a very big cliffhanger for a lot of characters, so there’s a lot to find out. It’s going to be unmissable.

The two-hour season premiere of Dynasty will air Monday, December 20, at 8 p.m. on The CW. The show will return with new episodes starting Friday, March 11. The first four seasons are also now streaming on Netflix. 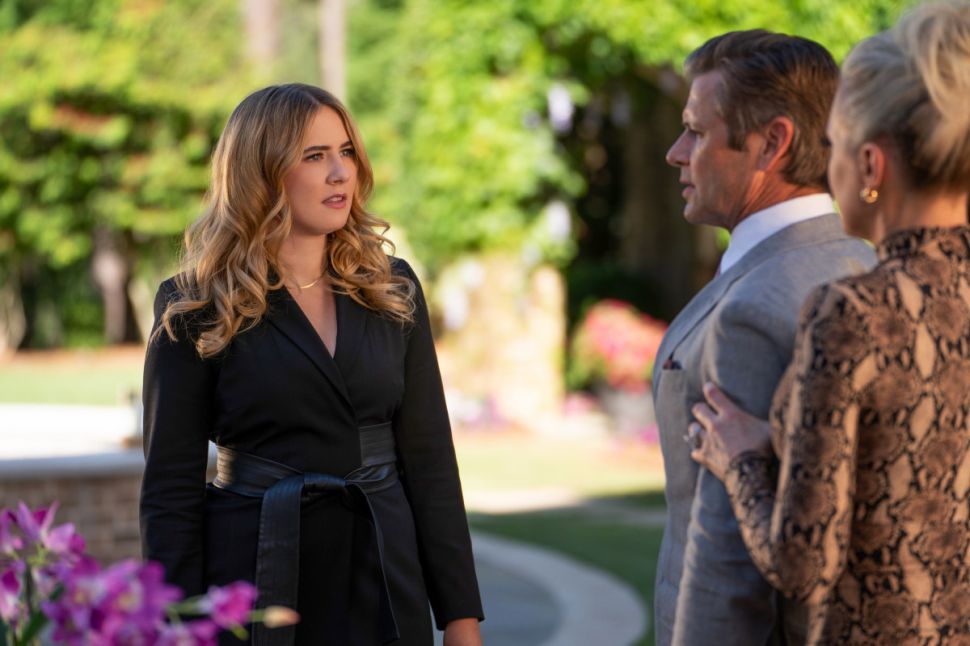