One lesson from the many Stephen Sondheim tributes worth heeding: dare to adapt unlikely sources. A vengeful barber whose victims end up in meat pies? Japan’s 19th-century relations with the West in kabuki style? Presidential killers?! No topic is off limits if it inspires the writers and the story “sings.” And so welcome Kimberly Akimbo, a quirky, moody, uplifting musical about a girl with a fatal genetic condition.

Based on the 2003 dark comedy by David Lindsay-Abaire, who wrote book and lyrics to Jeanine Tesori’s nimble score, the hero is a 16-year-old with a progeria-like disease. This super-rare fluke of DNA causes children to age four times faster than normal, and typically ends their lives by twenty. How to stage the subject without falling into traps of ableist exploitation? Cast an older actress; eschew cosmetic realism. And so luminous Victoria Clark, clad in kid drag and exuding teen pique, plays Kimberly Levaco, for whom adolescence is hard enough without the burden of time-lapse mortality.

Mature inside and outside, Kimberly is de facto caregiver for her dysfunctional New Jersey clan. Father Buddy (Steven Boyer) struggles to control his drink and his temper; moony mother Pattie (Alli Mauzey), pregnant with a second child, openly prays #2 will be normal; aunt Debra (Bonnie Milligan) rolls up, a fast-talking grifter who sows chaos. Compared to these damaged adults, Kimberly’s schoolmates are only mildly maladjusted. They include a sexually ambiguous foursome from the glee club (Olivia Elease Hardy, Fernell Hogan II, Michael Iskander, Nina White), each in love with the “wrong” person. And there’s Seth (Justin Cooley), a tuba-playing nerd obsessed with anagrams who’s drawn to Kimberly (his puzzle-work echoes in the title).

Tesori and Lindsay-Abaire previously teamed on the big-budget, not-loved Broadway adaptation of Shrek (2008), and again they tackle an outsider whose forbidding appearance masks a gentle soul. While Kimberly’s exterior denotes decades of life’s wear and tear, she’s just an innocent eager to see the world. (The “I Want” number is her application to the Make-A-Wish Foundation.) Conversely, everyone in Kimberly’s orbit who experiences the usual passage of time can’t live in the moment, blinded by regret, delusions, or schemes—byproducts of squandered lives. Kimberly’s mother, father, and aunt are all bound by a squalid secret from Secaucus that spills out at a climactic family dinner.

And what a delectable score this cast has to sing (sensitively orchestrated by John Clancy and Macy Schmidt), ranging from soft-rock anthems to brokenhearted ballads and even a comical school presentation on various diseases. Lindsay-Abaire’s goofy-veering-into-grim style plays to Tesori’s protean strengths, which include plangent writing for younger ensembles, the ability to modulate seamlessly from soul to pop and Sondheim-like neurotic noodling. Even though Tesori surfs across popular idioms, her writing never degenerates into bland pastiche. It retains that energetic, melancholy, hopeful signature, whether a family is dealing with a closeted father (Fun Home) or class and racial tension (Caroline, or Change) Kimberly Akimbo is a more modest achievement, yet more evidence that Tesori is the most significant musical-theater composer of the past twenty years.

I hear the inevitable question about a quality musical at an Off Broadway space: transfer? Although I adore this cast and am eager to hear the score again, I think the material needs cuts to reach a bigger audience. At two hours and twenty minutes, Lindsay-Abaire’s oddball dramaturgy can wear thin—character-driven whimsy begins to grate on the nerves. For all the laughs and grace notes, it’s a downbeat fable about escaping the toxic narcissists who created your body. Kimberly’s emotions implode, the opposite direction feelings are supposed to go on Broadway. In its unpretentious chamber form, you can ignore longueurs and savor Tesori’s craft, Lindsay-Abaire’s wit, and a first-rate ensemble, but tough decisions will have to be made if Kimberly ever wants to truly grow up. 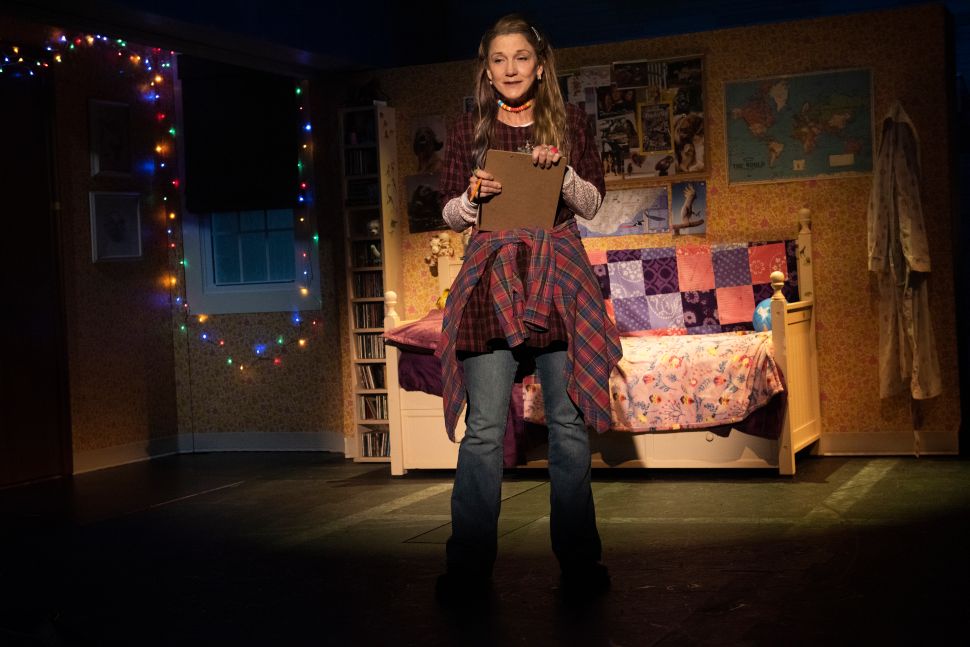