It’s been a really rough two years. I know I’m not alone in feeling trapped in an endless loop of anxiety, trauma and dread. Stephen’s Sondheim’s death has felt — to the theater community and beyond — like another tick on a much-too-long long list of things-to-mourn. But just like Mr. Rogers said to “look for the helpers” when bad things happen, I’ve always found it imperative to look for the joy.

Since Sondheim’s passing, hundreds of fans and colleagues have taken to social media to post letters they received from him. An Instagram account, Sondheim Letters, is documenting them all, and it’s pure, heartwarming happiness.

Sondheim not only answered fan questions about songs and songwriting; he agreed to help with homework assignments, listen to tapes and read college dissertations. He even answered one letter as his Standard Poodles, complete with a blue watercolor paw print.

Sondheim’s letters, written on a typewriter on his personal stationery, spanned over half a century.

“It seems to me he believed his role as an artist was not just to create the work, but also to engage with his audience in every capacity,” Brandon Baruch, a Los Angeles-based lighting designer, tells Observer.

Baruch wrote to Sondheim when he was in the fourth grade as part of a school assignment. Having just seen Into the Woods on VHS, he “told him I loved his musicals and brazenly asked him to send a poster.”

Sondheim wrote Baruch back, apologizing for not being able to send him the poster he’d requested (“all my extra ones were destroyed in an unfortunate fire”) and enclosing a good alternative; an Anyone Can Whistle poster from an AIDS benefit concert featuring Bernadette Peters, Scott Bakula and Madeline Kahn.

It happened in a singular moment on a rehearsal stage at eighteen years old. Kitt, who played Cinderella’s Prince and The Wolf in a high school production of Into the Woods, was in the midst of learning the act one finale.

“There’s this beautiful contrapuntal moment around the lyrics,” Kitt says, describing the exact instant he knew “this is what I want to do with my life.”

Quoting the lyrics, “Though it’s fearful, though it’s deep, though it’s dark, and though you may lose the path,” Kitt tells Observer that his life’s mission suddenly clicked into place. “I just remembered thinking as I was hearing it go by: I’ve never experienced anything like this.”

Many moons later, Kitt watched his own children perform in a summer camp production of Into the Woods, and wept throughout the entire show. But when the act one finale arrived — when he heard the musical moment that defined his life’s trajectory — he “lost it.”

Kitt wrote Sondheim an email, telling him “what the show meant to me, what it meant to see my kids in it, and what that moment unexpectedly brought out in me.”

Kitt got a kind and gracious email back from Sondheim, but the note he has framed arrived by snail mail, on Sondheim’s signature stationery. It’s a letter thanking him and Brian Yorkey for “You’re Always Here,” a song they wrote together for Sondheim’s 80th birthday gala celebration.

Stanley, who played April in the 2006 Broadway revival of Sondheim’s Company, sent a thank you note to him after playing Gussie in the 2012 Encores! production of Merrily We Roll Along.

“I don’t recall what I said in my note to him,” Stanley tells Observer. “But I’m sure it was a love letter, expressing my gratitude for writing these scores and creating these characters — and for trusting me to play them from time to time.”

In true Sondheim fashion, he wrote her back, thanking her for her letter: “It was a pleasure to have you in the cast, and I thought you were wonderful in the part.” Then, incorporating old-school punctuation of two spaces after the period, Sondheim added a single word: “Really.”

Because, being the musical genius he was, he knew the power of a full pause.

Kuhn, who is currently starring in the Off Broadway revival of Sondheim’s Assassins, tells Observer that her letter from Sondheim arrived after she sent him a recording of a Lincoln Center concert she performed.

“To know that he listened to it and that he took the time to write about it was very touching.”

Seth Bisen-Hersh tells Observer that he wrote to Sondheim 18 times over the course of more than two decades. “At some point he stopped signing the letters ‘Stephen Sondheim’ and switched to “Steve S.”

“Not only did he write back every single time,” Bisen-Hersh, a composer and lyricist, continues; “I would get letters back within a few days.”

Responding quickly and answering multiple letters from the same person was typical of Sondheim. What’s remarkable is that he didn’t only answer letters at the beginning of his career, then stop answering when he got famous. Sydney Pardee, an early childhood educator from Dallas, has a letter from Sondheim from May of this year.

Charmingly, it didn’t arrive on the self-addressed stamped envelope she sent along with her note. But, “as soon as I saw a typewritten envelope with my name on it I knew what it was,” Pardee tells Observer.

Bryan Andes, a kindergarten and first grade teacher at PS212 in the Hell’s Kitchen neighborhood of Manhattan, received his final letter from Sondheim in October of this year, a month before Sondheim passed at 91 years old. It’s one of nine letters spanning 15 years of correspondence.

Andes tells Observer that he implemented a theater study program back in 2005 at PS212 “inspired, in part, by my love of Sondheim’s work.”

During the program’s inaugural year, he reached out to Sondheim to ask if he would come to the classroom to talk about musical theater and answer questions from his students.

“Within days I vividly remember walking into our school’s office and seeing an envelope in my box. It had his address stamped on the back.”

Of course, he didn’t always acquiesce to fan requests. Many of his letters are a lesson in the art of politely saying no. “Please forgive me” appears in multiple replies. He courteously turned down invitations to attend shows or meet up for drinks, but he also agreed to multiple such asks.

In a particularly heartwarming exchange with a fan who wanted to get together in Chicago, Sondheim wrote an apology letter detailing the great efforts he went to get in touch with her at her hotel, listing the number of times he let the phone ring and the various interactions he had with the hotel operator. “I’m sure you were disappointed, and I’m truly sorry, but I did my best.”

“Needless to say it was beyond generous for someone of his legendary stature and unparalleled ability to make himself so available to those of us who were inspired by his creations,” Broadway actor Steve Rosen (Guys and Dolls, Spamalot) tells Observer.

A self-described nerd (“I even subscribed to a magazine devoted entirely to him”) Rosen wrote three letters to Sondheim as a teen — and always heard back.

In a full circle moment, Sondheim would, years later, sit in the audience of Rosen’s Off-Broadway musical, The Other Josh Cohen, which he starred in (and co-wrote) with David Rossmer (Fiddler on the Roof, Les Misérables).

“I feel like when famous people die, sometimes learning more about them sort of debunks what you loved about them, but it’s been the exact opposite with Sondheim,” Harriet Taylor, a London-based director and producer, tells Observer.

When you write to someone who has changed your life with their art, it can feel like baring your soul. To have that person not only read your words, but respond with kindness, is a rare and extraordinary gift.

It’s why Kitt aims to follow Sondheim’s example; to respond to fans as much as his mental health allows.

Because, as he tells Observer, “I remember being that kid.”The kid who was so profoundly moved by Into The Woods that all he wanted was to “be in the orbit of someone who has a voice unlike any before and any that will come after. 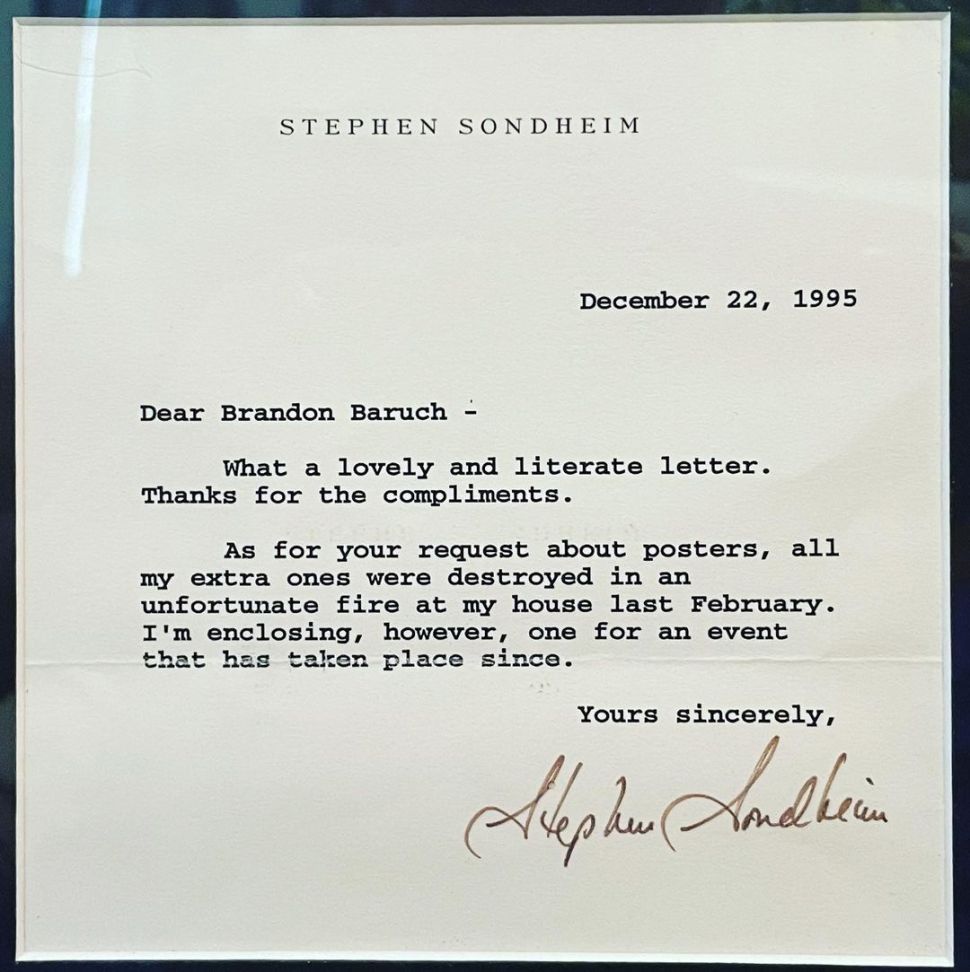