Fluxus is everything we’re interested in now: mixed media, beyond categorization, collaborative processes. But Fluxus isn’t the first thing we talk about; it isn’t the toast of the table, or the footnote on the opening page. Fluxus is too many mediums, too many people, and we need heroes with superpowers. To sell Wheaties and paintings and records and newspapers and search histories and all the junkola we need to be heroes to ourselves—like brand new Cadillacs, and Hermes belts, and Dr. Squatch soap.

The problem of Shigeko Kubota is the problem of collaborative artists. The collaborative spirit isn’t how we move product or entertainment; it doesn’t feed our marketplace or nourish our narcissism. Kubota was integral to Fluxus and the works of the Fluxus artists we talk about—Yoko Ono, George Maciunas, John Cage, Nam June Paik, etc. To present her without that context is to tear meaning from the work, but to isolate her within Fluxus is to diminish her work’s importance and dollar value.

In “Shigeko Kubota: Liquid Reality,” the Museum of Modern Art assembles six of the artist’s sculpture and video installation hybrids: Self-Portrait (c. 1970–71); Duchampiana: Nude Descending a Staircase (1976); Three Mountains (1976-1979), Berlin Diary: Thanks to My Ancestors (1981), River (1979-1981), Video Haiku (1981), and Niagara Falls (1985). The fifteen-year span traverses an unsteady cultural landscape: from the waning years of “happenings’ to pre-punk to punk to post-punk to disco to no wave to new wave. The curation walks the line of individual versus context with a streamlined presentation of Kubota’s installations, and plenty of contextualizing information if you look for it; there’s a brilliant catalogue introduced and overseen by Erica Papernik-Shimizu, and, in MoMA’S online magazine, an equally fine overview provided by Papernik-Shimizu and Veronika Molnar. With a Kubota retrospective traveling in Japan through February 2022, “Liquid Reality” champions and restores works by the New-York based Kubota, and gathers almost enough of a checklist for the casual museum goer to get a sense of the artist. Kubota, who passed away in 2015, has not had a solo U.S. museum show in twenty-five years.

Born in 1937, Kubota was introduced to Tokyo’s experimental arts and music circles by her dancer aunt, Chiya Kuni. With noise compositions, avant-garde performances, and cutting edge technologies (like tape recorders and projections), Tokyo paralleled contemporaneous explorations in New York City—and in 1962, Kubota met John Cage and Yoko Ono at a Tokyo stop of Cage’s concert tour. Kubota, after striking up a correspondence with Fluxus founder George Maciunas, ventured to New York City the next year, and emerged in 1965 with her Vagina Painting performance, which at the time was seen as a feminist rejoinder to works by Jackson Pollock and Yves Klein and a scene dominated by machismo. (Kubota would only perform the Vagina Painting once, and in an oral interview conducted with MoMA shortly before her death, recalled that George Maciunas and Nam June Paik, who she married in 1977, had “begged” her to do it.)

Kubota, who continued her studies in New York at New York University and The New School, went on to be an active citizenship in the New York art world, teaching at the School of Visual Arts, working toward the first annual Women’s Video Festival at The Kitchen in 1972, and curating at Anthology Film Archives from 1974 to 1983.

Formally trained as a sculptor, Kubota was quick to adopt video: the heavy, clunky equipment appealed to her. (Sony’s first recording and playback system, the Portapack, was released in 1967.) The burden was part of her identity, as an artist and a woman. For the 2013 book, A History of Video Art, she told Chris Meigh-Andrews, “Portapak and I travelled all over Europe and Japan without male accompaniment. Portapak tears down my backbone, shoulder, and waist. I travel alone with my Portapak on my back, as Vietnamese women do with their babies.” Kubota viewed the intrinsic decay and distortion of video as gestural, and suited to her simultaneously American and Japanese fascination with landscape. In a 2007 interview with Phong Bui for the Brooklyn Rail, she recalled, “film was chemical, but video was more organic. To me Portapack was like a new paint brush.” For her 1991 exhibition at the American Museum of the Moving Image, she explained how video likened itself to natural processes, such as the movement of clouds or , or even the ebb and flow of life itself: “Once cast into video’s reality, infinite variation becomes possible, not only weightlessness, but total freedom to dissolve, reconstruct, mutate all forms, shape, color, location, speed, scale … liquid reality.”

While the six works of “Liquid Reality” present only a tranche of the artist’s five decade output, the years represented—1970-85—mark a shift in social, technological and art consciousness: the 1975 Whitney Biennial included video artists for the first time—eighteen of them; Warhol’s impossible vision of fame culture had started to come true; and the muted palette of the late 60s, moss green and bark brown and dungarees, exploded into the black light neon of the East Village and the candy-coated cacophony of MTV.

Chronologically the first work in the show, Self-Portrait, 1970-71, frames the artist in medium close-up as she claps, mouth syllables, sings, and communes with the camera. Video distortions course through the image: banding, color, ghostly layering. There is a chemical/acrylic quality to the chroma, but the image isn’t static like a photograph or painting. The camera sometimes sways unsteadily. The effect is highly personal, immediate—despite all the hyper-conscious post-production. The artist, in her moment, reaches into yours. Self Portrait would eventually evolve into Video Poem, shown at the first official PS1 show, Rooms. The 1976 exhibition snapshots the NYC zeitgeist with installations by 78 artists. Kubota’s work is easy to place in the company of even a partial, subjective list: Lynn Hershman Leeson, recently on view at The New Museum, Ron Gorchov, currently on view at Cheim & Read, Bill Jensen, Colette Lumiere, Dieter Froese, Lucio Pozzi, Marjorie Strider, Judy Rifka, Stefan Eins, Eve Sonneman and Robert Grosvenor.

The second chronological work in the show, Duchampiana: Nude Descending a Staircase, 1976, embeds television tubes in a plywood staircase, reimagining Duchamp’s iconic work, as well as classical composition, with the quick cuts and erratic pacing of video. In the layers of film and video, the model smiles once, fleetingly, bringing Duchamp’s now somewhat stale revelation to life. Three Mountains 1976-79, and River, 1979-81, engage the artist’s relationship with landscape. Three Mountains takes on the contemplative grandiosity of the American Southwest, while River, the later of the two works, is more excited, agitated, and forays into East Village style: black paint, vibrant hues, videographic elements of hearts, stars, snaking lines and an ultra-80s SMPTE color bar. In Berlin Diary: Thanks to My Ancestors,1981, Kubota considers form and abstraction, and maybe graffiti, with the names of her ancestors inscribed in Japanese characters on a thin sheet of quartz suspended above a smallish Sony television. Video Haiku-Hanging Piece, also 1981, furthers the artist’s meditation on self, technology and the quotidian. Niagara Falls, 1985, is a grander-in-scale pondering; like Video Haiku-Hanging Piece, the work is arguably more concerned with the shadows/reflections cast than the sculpture itself.

The two rooms of “Liquid Reality” configure Kubota’s works in an approximate infinity symbol, and the more a viewer is willing to stand and watch and drift, the more the artist carries forth. But if “Liquid Reality” is a primer on Kubota, whose fierce, determined intelligence resists reduction, it’s also a series of tantalizing curatorial questions. Fluxus and the Tokyo avant garde? The history of video art as a “Herstory”? (MoMA has recently acquired early works by Gretchen Bender, Dara Birnbaum, Beryl Korot and Steina Vasulka.) Kubota and Nam June Paik? (Nam June Paik was recently on view at SFMOMA.) Maybe all of 2020 and 2021 has necessarily imprinted some kind of optimism—there must be something coming, some new perspective, some better way of understanding—and Kubota is the ideal artist to solicit that instinct. 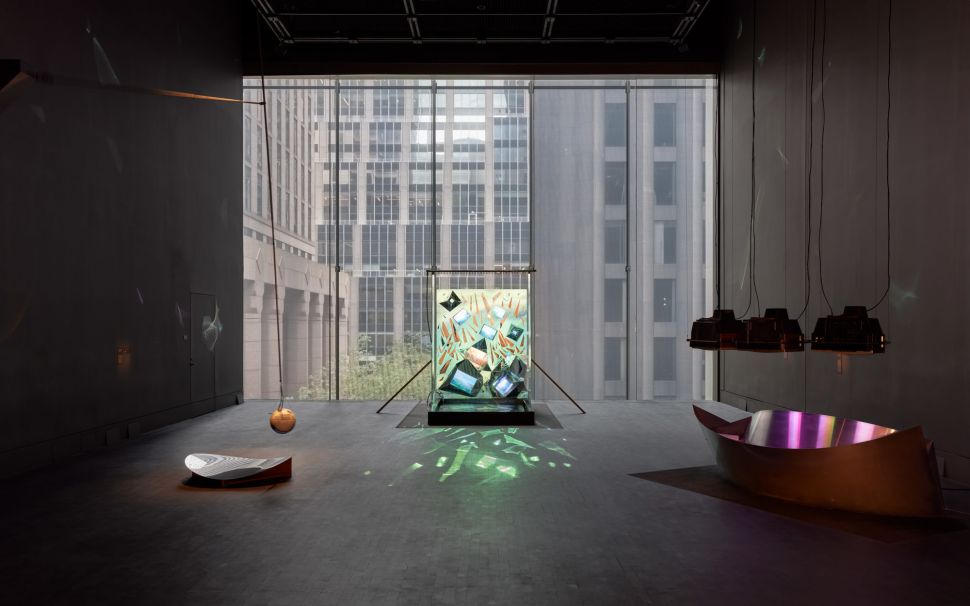