When Ottessa Moshfegh’s second novel, My Year of Rest and Relaxation, debuted in 2018, something shifted. The book is still passed around with talismanic reverence because here it was; someone had finally acknowledged how much we want to be so beautiful, any degree of cruel behavior could be overlooked. How much we want to be dead, but only temporarily. Readers, deluged by Trump news and an onslaught of data generated by a brutalized planet, just wanted to be sedated.

Moshfegh’s nameless protagonist is white, blonde, rich, gorgeous and a total mess, but  possesses enough passion and acumen to drug herself to sleep for more or less an entire calendar year. Her efforts are unhinged and distressingly plausible. Her thoughts betray a deep contempt for everything and everyone. Somehow, you grow to love her.

This December, Gagosian Gallery is launching Picture Books, a new imprint conceived by The Girls author Emma Cline that pairs fiction writers with visual artists – the artist is given free reign to produce an image inspired by the book, and the resulting works are being presented together in limited hardcover editions. The inaugural version of this project pairs Moshfegh’s My New Novel, a previously unreleased short story, with a creation by Issy Wood, a multi-hyphenate painter and musician whose works are deeply dark and amusing.

My New Novel is a story that makes use of rhythms that will be familiar to Moshfegh fans  – alcoholic, morally repugnant characters who give off the stench of mediocrity are at the fore – but her ability to shock and delight in just a few, skillfully condensed pages only seems to be hardening further into diamond-like indestructibility.

“I had been really passionate about the short story genre for most of my development as a writer,” Moshfegh told Observer during a recent phone call. I reached her in Bend, Oregon, where her sister-in-law’s wedding was a day away from taking place. She finished her short story collection Homesick for Another World in 2015 and turned her attention to novels, thinking she was done with the former medium for a while.

“But when I was revising My Year of Rest and Relaxation, I felt moved to write a short story and I was like, ‘Well, that’s an interesting feeling like, let me indulge that.'” She completed My New Novel and set it aside, unsure of where its home would be until Cline approached her with the Gagosian project, and everything clicked. “Everybody always says it would be cool to do a collaboration between writers and artists, but no one does it, so I feel lucky that I was the first [to be published in the Gagosian series].”

Jerome Littlefield, the story’s “hero,” is repugnant. A struggling author, Jerome stares shamelessly at strangers’ breasts and pays to be berated ruthlessly by his analyst. He binge drinks and fancies himself a genius on the make. We’ve met this guy before, but Moshfegh unearths new facets of the consummate literary misogynist like an entomologist discovering a new species of bug.

“I think I was sort of riffing off of my own neurotic insecurities that I can really only express through satire because they’re so absurd to me,” Moshfegh said. “Like everybody else, I have an annoying person in my mind that’s talking to me telling me that nothing I do is good enough, and it’s such a stupid voice. So I think that lent itself to Jerome, and exploring my sense of humor in the context of a young white male novelist.”

Moshfegh’s self-confidence, well-documented in the interview format, is legendary and occasionally misunderstood. She’s described herself as “fucking brilliant,” and she is! As such, logically, Moshfegh also understands that her inner critic is simply wrong. It’s an enviable state of mind.

She lifted the character’s name, Jerome Littlefield, from the 1964 Paramount Pictures comedy The Disorderly Orderly, which stars Jerry Lewis as an aspiring doctor crippled by “neurotic identification empathy.” The condition renders him helplessly sensitive to the suffering of his ailing charges.

“He’s this sort of disabled medical professional who’s relegated to being this terrible orderly, not even a nurse, just someone who brings you your soup and brushes your teeth. I saw Jerome as someone with great ambition and privilege, but who couldn’t, because of his own vulnerabilities, pull himself up enough to be as great as he felt he was fated to be. And that’s just so understandable.”

Issy Wood’s Moshfegh-inspired painting, The down payment, shows us a weeping man in unflattering close-up. Five chipmunks cling to his shoulders; his hands; his hair.

Moshfegh and I both grew up in Newton, Massachusetts, a city west of Boston known for its excellent schools and tony neighborhoods. It’s also thought to contain the highest number per capita of psychiatrists in America. Moshfegh is an ‘80s kid, and the first person in her family to be born in the United States: her mom is from Croatia, her dad is from Iran and the couple decided to settle in Massachusetts during the turmoil of the Iranian Revolution. They’re both violinists.

“My observation of Newton was that people seemed really smart, so I couldn’t understand why we were all pretending that it felt normal to be alive; that there wasn’t anything absolutely staggeringly weird about being alive, and that was kind of my whole childhood,” Moshfegh told me. “I was like, ‘everyone’s in on it.’ I was very paranoid that everyone knew that this was just something you didn’t talk about or acknowledge, and it made me feel insane.”

Newton also has an underlying frequency that, if you’re a certain kind of person, leaves you constantly unsettled and eager to prove yourself in order to drown out that low, omnipresent hum. This kind of psychic disturbance can also force you to become funny as fuck as an endurance tactic.

This frequency is reproduced beautifully in Moshfegh’s fiction: the teacher who ducks out for lunchtime beers in “Bettering Myself” has admirable powers of observation, but can’t stop drunk-dialing her ex-husband. The bereaved spouse in “The Beach Boy” “lived his entire life on his best behavior, a slave to decorum. For what?”

Titular Eileen’s greatest joy is taking mammoth, laxative-triggered shits in her basement bathroom. There’s the furtive and the absurd; the lack of impulse control coupled with brief glimpses of the sublime. There’s a shit moment in My New Novel too, and it’s tossed out so jarringly it felt like someone had lobbed an actual hard turd and bonked me on the side of the head. But that’s the mark of a good story: better to be in the eye of a fascinating feces hurricane than loitering in humdrum, palliative purgatory.

Speaking of shitstorms, it really must be said that the pandemic is starting to feel like a drag. Moshfegh, tucked away in Pasadena with her husband and their four dogs, completed a book as the virus raged unchecked. Lapvona, which comes out next June, explores spiritual upheaval “in a village in a medieval fiefdom buffeted by natural disasters.” It’s also the first novel Moshfegh has written in the third person. Thus far, she’s survived with her productivity more or less intact. But something’s been lost, never to return.

“I can’t really remember what I used to be like,” Moshfegh said. “I think I was probably a little bit more self-absorbed.”

At the peak of Covid-19-induced terror, she posits, “the idea of something having meaning sort of became redefined. Facing anxiety on that scale is, I think, something that takes a lot of strength and creativity, because you need to invent a self that knows how to handle shit.” It’s clear that she has. 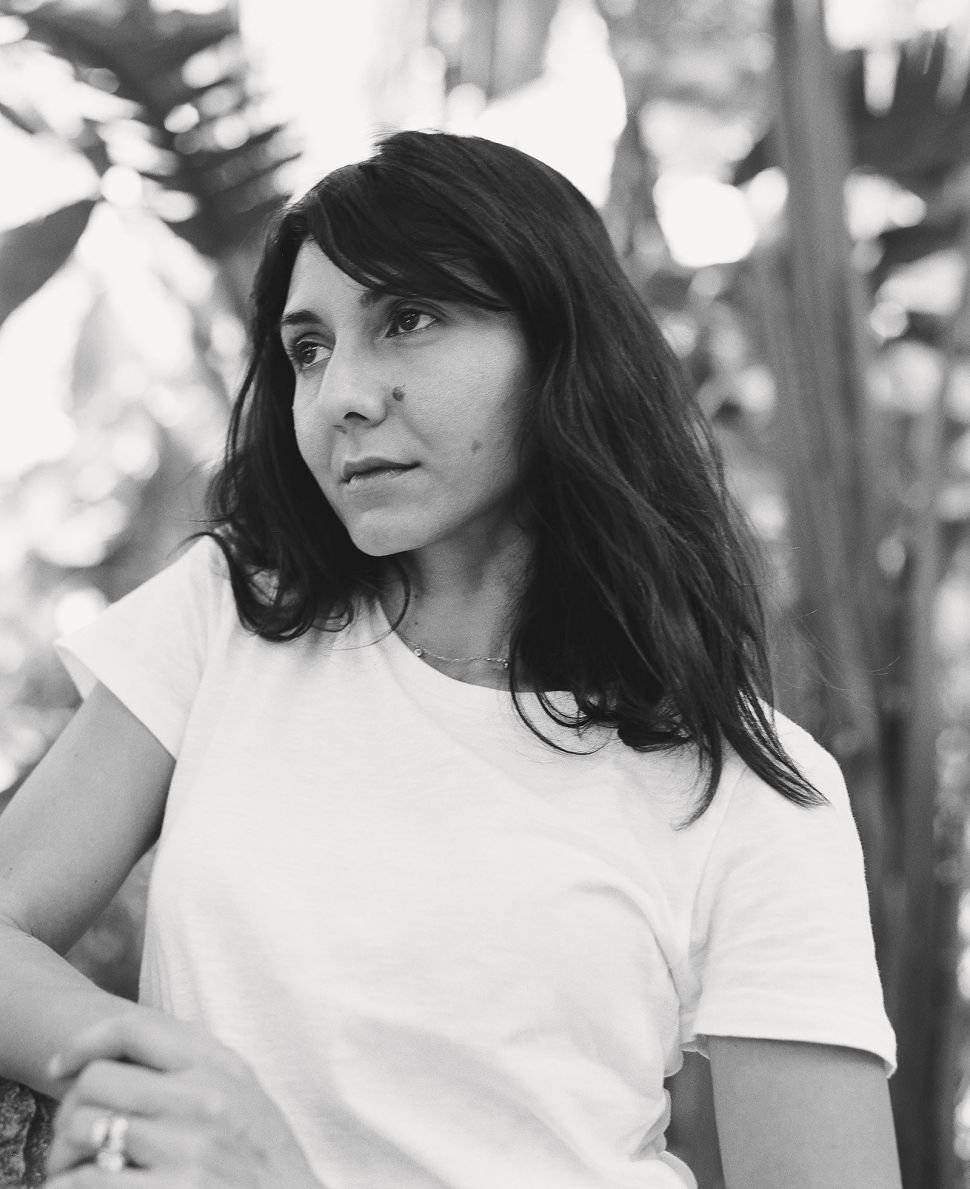