A year after Hallmark and Lifetime debuted their first holiday movies with gay lead characters, Netflix has answered the calls for greater inclusion in its end-of-year programming with Single All the Way, an unabashed celebration of queer love set against the backdrop of a classic Christmas movie.

Directed by the Tony Award-winning director Michael Mayer and written by Chad Hodge, Single All the Way centers on a perpetually single man named Peter (Ugly Betty’s Michael Urie) who convinces his best friend Nick (Philemon Chambers) to join him and his family for the holidays and pretend that they’re in a romantic relationship. But when his mother Carole (Hocus Pocus’ Kathy Najimy) sets him up on a blind date with her handsome trainer James (Brothers and Sisters’ Luke Macfarlane), Peter finds himself caught in an unexpected love triangle. In addition to Najimy, Barry Bostwick and Jennifer Robertson, the supporting cast includes the effervescent Jennifer Coolidge, who plays Peter’s aunt Sandy.

“Chad wrote a very good, extremely tight script. It was filled with Christmas movie tropes; it was filled with radical queer joy. It was homophobia-free, it was shame-free, it was trauma-free, so he basically had me from the jump,” Urie tells Observer. “Whenever you make a movie, there’s the script, there’s what you shoot, and then there’s what they cut together. I haven’t been in a lot of movies, but I’ve been in movies where you would see three completely distinct ‘movies,’ and this movie—when I read it, when we shot it and when I watch it—feels the same. It is exactly how I imagined it.”

In a phone interview from New York City, Urie spoke about Coolidge’s impeccable comedic timing, the experience of leading Netflix’s first gay holiday rom-com with Chambers and Macfarlane, and the importance of telling a wider breadth of stories that represent different experiences within the LGBTQ+ community.

Observer: Single All the Way is billed as Netflix’s first gay holiday rom-com, and it comes at a time when there have been increased calls for inclusion in the genre as a whole. Do you think we are finally at a place in the industry where queer stories can cover a wider spectrum?

Michael Urie: Yeah, I do. I think spreading awareness is, and was, extremely important. Telling stories about coming out, telling stories about the kinds of trauma that gay people go through—that was all very important. The earliest movies about gay characters always involved some kind of gay punishment, and then we had movies that were about awareness and movies that you could look to to help come out. When I was on Ugly Betty, there was a really moving episode where my character came out to his mother, and she didn’t accept him. He was a strong gay man, and he was out and proud, and he had a mother who didn’t accept him, and I think that was really important for a lot of people.

And now here we are, 14 years later, and we’re able to tell stories that are about people who have accepting families, who are not filled with shame and who, at some point, came out, but it happened offscreen in the past, in some prequel we’ll never see. We can tell these stories, and we can show the world the way it is for a lot of people, and the way that it should be for all people. I’m super proud of that. There’s a gay Christmas rom-com on Netflix, and it is now in 214 million people’s homes. There are going to be some people who won’t watch it because of what it’s about, and there will be some people who will watch it because it’s a Christmas movie and they don’t care that it’s about gay people. It might just help somebody to see this queer joy, this radical, queer family whose problem is not that their son is gay—it’s that their son is single, and they will do anything to help him find the man of his dreams. It’s a lot more fun for conflict to come out of that than for conflict to come out of hiding that you’re gay or trying to not be gay or recovering from something that happened because you were gay. It’s a little harder to find comedy in that stuff.

This is your co-lead Philemon’s first major project, but he really holds his own in a cast stacked with seasoned veterans. What were your initial impressions of him from that Zoom chemistry read, and what memories stick out from filming with him?

From the moment that I looked into his extremely beautiful eyes on Zoom, I felt like I’d known him for years, and we had this chemistry right away. When he acts, he’s truthful. You kind of just are or you aren’t when you’re acting—and he’s a total natural at that. The camera loves him—and not just because he’s attractive, but because he’s an honest and open human being and a beautiful spirit.

What I noticed about him on set was how quickly he picked up being the star of a movie—navigating the politics of a movie set, or the various ways in which you have to work when it’s a 12-hour day, or whatever thing that you can’t know until you’ve been on a movie set. I was like, “Hey, I want this to be a great experience for you, because if it’s not a great experience for us off-camera, then it won’t be as much fun on-camera.” But he’s a natural at that too! He’s just made for this, and it is such an incredible debut for an actor to suddenly be the star of a movie and for him to be so, so well-equipped for it.

You and your co-star, Luke Macfarlane, were classmates at Juilliard, and it’s been so interesting to see the trajectory of your careers. You’ve both starred on beloved shows and you’ve become more involved in theatre while he has become the king of Hallmark Christmas movies. What was it like to reunite with him in a genre that he knows so well?

I’ve watched Luke’s Christmas movies, and I’ve been so impressed that he’s this hunky Hallmark heartthrob, but I’ve also been really proud of his confidence as a gay man. We were on Brothers and Sisters and Ugly Betty at the same time—we had just gotten out of school, and we were suddenly both playing gay characters on the same network [ABC]. Watching him being able to be a heartthrob and an action hero at the same time was just so cool and so impressive. He’s a really good man and extremely funny and charming.

Luke also had some great advice about making Christmas movies. (Laughs.) One of the things was: “Don’t wear a scarf, because continuity is so hard with a scarf.” And I learned that the hard way by wearing a scarf! But the other thing he taught me was that flirting is so fun. When you think about it, when you’re flirting with someone who’s flirting back, there’s nothing more fun than that, and that’s all romantic comedies are. It’s a ton of flirting! And when you know somebody, it’s so fun to flirt with them. And Luke and I never had a moment. We never dated, we never had that thing, but flirting with someone you know so, so, so well was so fun. It made the whole thing so easy.

Of course, we can’t talk about this film without mentioning the inimitable Jennifer Coolidge, who makes the most mundane things—like getting out of a car—funny.

She’s having such an amazing moment, and I’m in two movies with her this year. We made Swan Song—but we didn’t have any scenes together—and then Single All the Way, and they couldn’t be more different. I have been a fan of hers since forever, and I have to say watching her get out of that cab 30 times that night from all the different angles, Philemon and I laughed every time.

There’s something about what she does and what all great gay icons do, whether it’s RuPaul or Judy Garland or even Barbra Streisand. Whether it’s comedy or singing or acting, they always deliver and they always surprise you, and that’s what I would say about Jennifer Coolidge. The role was written for her. It said [in the script], “Enter Aunt Sandy. (Think Jennifer Coolidge.)” Chad always had her in mind, and everything she’s given in the movie to do is classic Jennifer Coolidge fodder, so you think you know what she’s going to do. And even on set, I thought, Oh, I know how she’s going to say this. I know how she’ll do this bit. And every time, she surprised me! I think that is where she fits into the gay canon—in that world of a diva or a gay icon or a drag queen. It’s the element of surprise. You know you’re going to get something great, but you don’t know what it is.

Single All the Way is streaming now on Netflix. 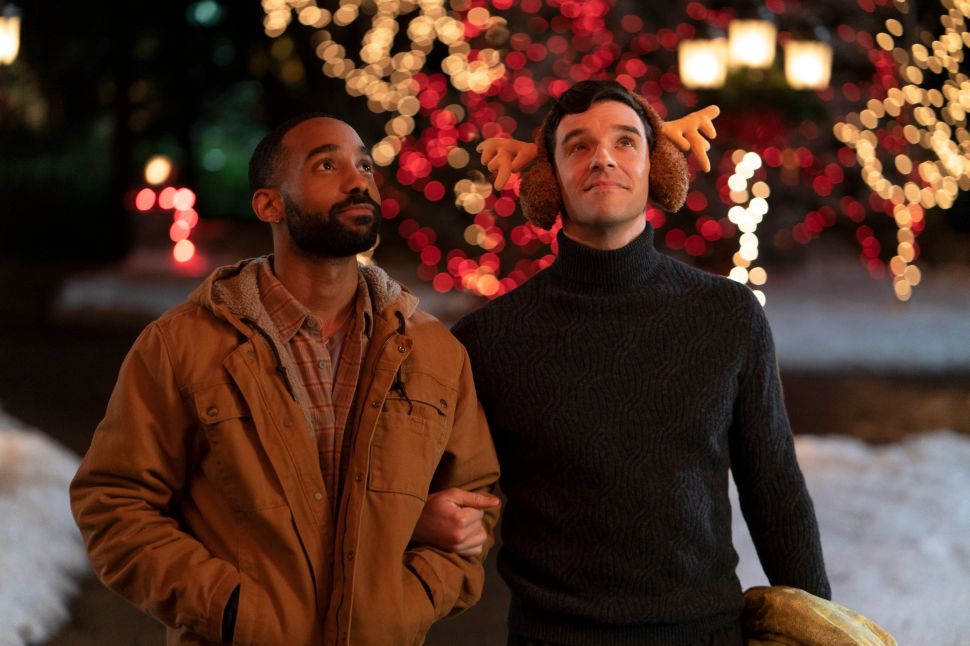