You might think that the pursuit of partners—for sex or relationships or lifelong nesting—would stay fairly constant between Company’s 1970 debut and the latest revival at the Jacobs Theatre. People flirt, dine, fuck, stay together, or drift apart. We haven’t evolved new organs or third eyeballs to aid in the process. Yet so much has changed in technology and ethics when it comes to dating: we are fused to phones and apps; we can’t assume an attractive stranger’s sexuality; and we triple-check consent. I wouldn’t argue that book writer George Furth and composer-lyricist Stephen Sondheim mapped our present datescape 52 years ago, but in director Marianne Elliott’s exuberant, re-gendered staging, material and moment have been reconciled to smashing effect. By centering this Company on women’s lives, libidos, and bodies, Elliott renews our vows of love for this enduring Sondheim masterwork.

Opening at the dawn of the “Me” Decade (quaint!), Company once seemed fresh in structure, if elements of the story bore an expiration date. It’s a nonlinear psycho-cabaret set in the mind of the unmarried man. Handsome, professional 35-year-old Bobby juggles girlfriends between visits to his wedded friends, who offer sobering glimpses into a life he has studiously avoided. Husbands display ambivalence to wives (“Sorry-Grateful”); wedding-day jitters nearly wreck a relationship (“Getting Married Today”). Our cheerful singleton may feel a periodic pang of emptiness but consoles himself with thoughts of the fragrant bouquet of ladies in his address book (“Someone is Waiting”). Amid the saucy high jinks and comic angst, Sondheim and Furth keep pulling us back to a surprise party for Bobby’s 35th birthday, where friends jokingly but insistently urge him to get hitched. What’s a swinging bachelor to do? It’s Sondheim—he has to hit a crisis point and sing about it.

In 2021, the show’s not overly dated or, considering all the “girls” in Bobby’s orbit, strictly sexist. Still, you sense a cultural palimpsest of Playboy and Laugh-In, especially in the book scenes, sitcommy traces of men as doofuses and women as shrill. (A 2011 New York Philharmonic staged concert starring Neil Patrick Harris embraced the Mad Men retro vibe.) Sondheim and Furth, gay artists a year away from Stonewall, had more brains and heart than to reproduce skirt-chasing stereotypes for sleazy applause. The wives and other women in Company are complicated and unpredictable; the men often gruffly resigned or envious of Bobby’s freedom. In Finishing the Hat, Sondheim himself notes in passing that “the women are drawn more incisively than the men.” Apart from Bobby, the most vivid character is Joanne (Patti LuPone), the boozy socialite who sings the withering bossa nova toast to “The Ladies Who Lunch.”

Which leads us to Elliott’s revelatory take: Bobby is now Bobbie, played by the knockout Katrina Lenk as a frisky, one-woman Sex and the City. Elliott has also flipped lines of dialogue between one of the couples (Christopher Fitzgerald and Nikki Renée Daniels) and cast a third couple as gay men (Matt Doyle, Etai Benson) on their tempestuous wedding day. Bobbie’s three current love interests are guys: stable and sensible Theo (Manu Narayan), hippie-bro musician PJ (Bobby Conte), and hunktastic flight attendant Andy (Claybourne Elder). These three harmonize on “You Could Drive A Person Crazy,” a lament about loving a commitment-phobe. In the original version, the husbands swarmed Bobby, leering and offering, “Have I Got a Girl for You.” Now the ladies flock to Bobbie with promises of gorgeous guys.

Is anything gained with this tinkering? A tremendous amount. By showing husbands as stay-home dads, or men not sticking to gender scripts (after he peels off Bobbie’s red pantsuit in bed, sensitive Andy pauses to compliment her style), by dramatizing how gay marriage can induce waves of assimilation panic, by allowing women to be as casual about sex and settling down as men, Elliott & Co show how our social selves are queerer, fairer, more feminist, and less monolithic than ever before. It’s really there in Furth’s humane, quirky book and Sondheim’s dazzling score; the pronouns just needed shaking up. When the majestic Patti LuPone delivers her “Ladies Who Lunch” for the ages, dripping with venom and sugar, it’s not simply a drunk’s self-loathing screed; Joanne is sharing her anger, insecurity and vulnerability with a kid sister, warning her:

So here’s to the girls on the go—
Everybody tries
Look into their eyes
And you’ll see what they know:
Everybody dies.

And then we see the shock in Lenk’s eyes as she beholds the woman she might become: a bitter serial wife pickling herself in vodka stingers and an ocean of bile. Rarely have I seen a gender-switch in theater that opened up so many extra layers.

In addition to these dazzling textual maneuvers, Elliott commands a deluxe physical production, color-coded in pinks and blues and grays. Bunny Christie’s sets, a battalion of light-fringed interiors, roll on and off to create a mobile world that approximates the jumbled mental odyssey of our heroine, surfing through living rooms, parks, and bedrooms. Crowded boxes of party people dematerialize into empty space, or huge neon letters from COMPANY or NYC roll on and off, Pop Art touches that suggest both architectural and online space. (Like the similarly fragmentary Assassins, Company is profoundly, dauntingly, cinematic in construction.) Other times, Elliott and Christie deploy Alice-in-Wonderland imagery (Party balloons growing huge; doors and cake shrinking down) as Bobbie keeps sliding down the rabbit hole of singlehood.

Should directors flip gender on other Sondheim classics? I don’t know how much we’d gain from a Ms. Sweeney Todd or a male-model Dot. In Company, human properties of trust, love, and loneliness are transitive across male, female, straight, and gay lines. One thing I am certain of: Company is the most sophisticated fun I’ve had in a theater in ages. It’s sexy, hilarious, and hits home in a way that’s honest and shockingly resonant. Sondheim fanatics already know what a genius score it is, an explosion of wit and insight and addictive melodies. I can’t wait to go again and tear up as Lenk bares her soul in “Being Alive” or the phenomenal ensemble slays the house in the maniacal razzle-dazzle of “Side By Side by Side.” The great man passed away two weeks ago; there is no more fitting tribute than a breakthrough work given a whole new life. 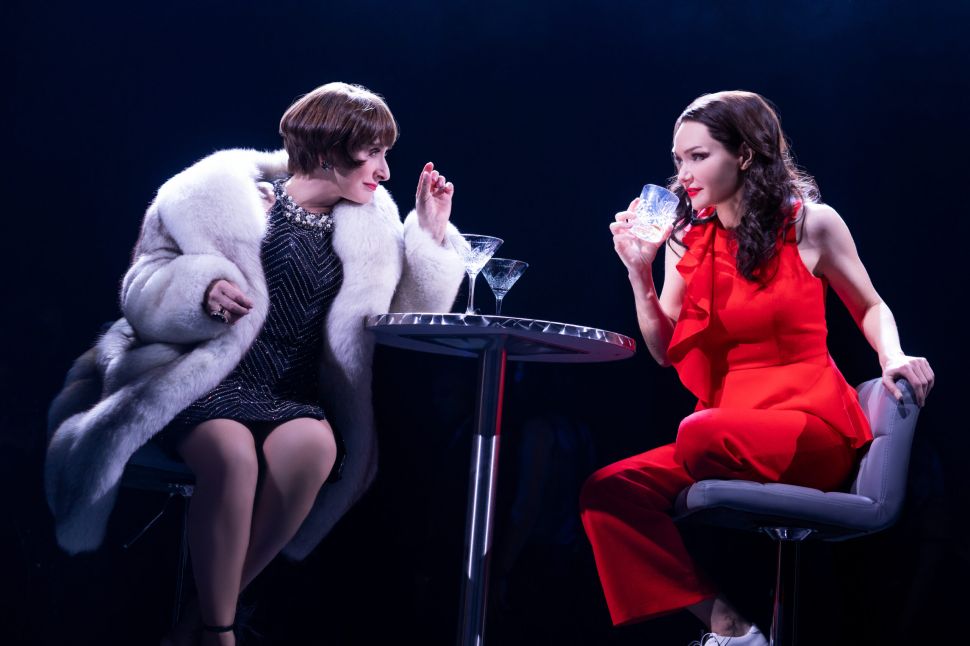