SpaceX aims to launch the first orbital test of a full-stack Starship as soon as January. But instead of the Texas “Starbase” facility where prototypes of Starship’s upper stage have been made and tested, the orbital flight will launch from the Kennedy Space Center in Florida, CEO Elon Musk said Friday.

“Construction of Starship orbital launch pad at the Cape has begun,” Musk tweeted. In later comments he confirmed that the launch pad is located at the historic Launch Complex 39A, the same pad used for SpaceX commercial crew flights to the International Space Station for NASA.

“39A is hallowed spaceflight ground—no place more deserving of a Starship launch pad!” Musk explained in a separate tweet. “Will have similar, but improved, ground systems and tower to Starbase.”

Construction of Starship orbital launch pad at the Cape has begun

SpaceX has a 20-year lease with NASA to use Launch Complex 39A since 2014. Under the agreement, NASA, SpaceX is allowed to make “launch infrastructure improvements within the boundaries of the pad,” NASA confirmed in a statement to CNBC. In 2019, NASA gave SpaceX permission to build a launch pad for Starship on Complex 39A. Builders poured concrete for the foundation late that year. The site has largely stayed dormant since then, with much of Starship development and testing happening in SpaceX’s “Starbase” in Boca Chica, Texas.

On Saturday, Musk tweeted a picture of an artist’s rendering of two fully stacked Starship rockets standing next to each other. “We will soon make these real,” he wrote.

Starship is SpaceX’s next-generation rocket designed to carry cargo and passengers to the Moon and Mars. The complete two-stage rocket will stand nearly 400 feet (120 meters) tall, making it the largest spacecraft ever built.

The initial orbital test might not succeed, Musk said during a meeting with the National Academy of Sciences, Engineering, and Medicine Space Studies Board last month.

It took SpaceX eight attempts to successfully and launch and land a Starship upper stage from 10 kilometers in the sky. An orbital flight (minimum 160 kilometers) with a much larger rocket will be a challenge on a new level.

We will soon make these real pic.twitter.com/t4z5oNFnwW 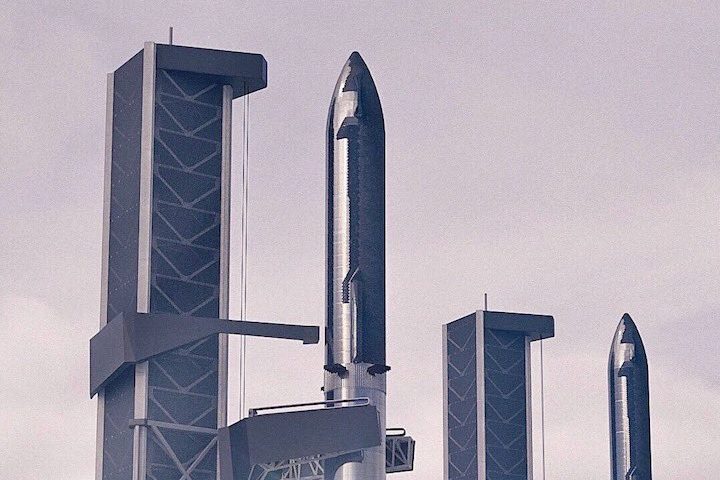