Decades seem to have passed since my last Tovah Feldshuh interview. It was in her apartment on Riverside Drive, and it was upstaged by daughter Amanda. Three or four at the time, Amanda hopped on a sofa to model a new dress, hoisted her skirt in the air and showed her panties instead. Mortified Mommy went for a comic recovery: “No, dear, that comes later.”

Well, “later” has apparently arrived. That one-and-the-same Amanda just presented her with another grandchild to dote on. A third, from brother Brandon, turned three on Thanksgiving.

Grandmotherhood agrees with Feldshuh in several special ways, even professionally. It has opened her up to the youth market—big-time. She has only to point to her latest screen co-star—a big red dog named Clifford. “It’s not Kissing Jessica Stein,” she concedes, citing a particularly proud moment in her career, “but it’s a comedy—a comedy that is really fashioned for children. And, now that I’m a grandmother, I’m very proud to be in it.”

The movie found its market and did enough box-office to warrant a Clifford the Big Red Dog 2. She hopes to be in that one, too. She’s Mrs. Crullerman, a neighbor of the main characters, and she wears an accent that she picked up during recent travels to Vitebsk, Sibera.

Right now, Feldshuh’s coming out of a flurry of filmmaking—most recently the Chicago-shot Start Without Me with Finn Wittrock. Before that, she and newly Oscared Anthony Hopkins headed a three-generational family that includes Anne Hathaway in Armageddon Time.

She has been busying herself recently with a steady run of Ruths. The Book of Ruth is a movie short that made the festival rounds last year and netted a few awards for Feldshuh. It supposes that Anne Frank survived the Holocaust and lives today under the name of Ruth.

Before the pandemic, she created the stage role of Supreme Court Justice Ruth Bader Ginsberg in the Los Angeles world premiere of Sisters in Law, Jonathan Shapiro’s two-character play which paired her with Stephanie Faracy’s Sandra Day O’Connor. “It’s supposed to come to New York in 2022, produced by Elizabeth Webber, and it’s my hope to play RBG here,” Feldshuh says.

Currently, Feldshuh is in the arduous process of Being Dr. Ruth (Westheimer, the well-known sex shrink and little-known Haganah sniper), via a one-person play by Mark St. Germain. It starts previewing Dec. 4 for a Dec. 16 opening at Safra Hall in the Museum of Jewish Heritage.

The actress and the title character are in constant conversation. “She’s 93 and operating on all eight cylinders,” Feldshuh says. “She’ll be here on Dec. 4 and Dec 8 to do Q&As for anyone who wants to grab a ticket for that. She’ll be here for the opening—and for two more Q&As.”

This production will be Feldshuh’s third time of Becoming Dr. Ruth. “In the middle of the pandemic, I got very lucky,” she says. “David Ellenstein of North Coast Rep asked me out to Solana Beach to do a streaming version of Becoming Dr. Ruth. We rehearsed barely two weeks, maybe 16 days, and then we filmed it in three days. I was pleased with the results.”

On returning East, the actress contacted a favorite director of hers, Scott Schwartz—he previously steered her through The Prom, Golda’s Balcony and Arsenic and Old Lace—and the two cooked up a production for this coast at his Bay Street Theater in Sag Harbor, NY.

“I said, ‘Look, I’ve got this one-woman play, and I own some props and my costume as part of my arrangement with North Coast Rep. They belong to me,’ so we went into rehearsals—not to replicate North Coast Rep but to re-excavate the piece—and did it at Bay Street. Now, we have been invited to New York, and this time we’re really redoing the piece. Basically, it is, again, a production of Becoming Dr. Ruth, but this one is deeper than ever and more honed and explored. I’m very excited about it. If she can do what she did with her life, we don’t have any right to complain about bumper-to-bumper traffic or not being able to get Wi-Fi.”

It’ll be Feldshuh’s first time on an Off-Broadway/Broadway stage in seven years—since she replaced Andrea Martin in Pippin, a musical composed by Scott’s dad, Stephen Schwartz. That bit involved considerable physical dexterity, which she welcomed. “As a kid, I had a swing set that had two swings, a pedal-pusher and a little trapeze. I used to hang upside down in my brother’s hand-me-down shorts in the summer and in the winter in my green snowsuit.”

Although she works every medium there is, theater is where she started, and it still has her heart as she inches toward a half century on the boards. Terri Sue Feldshuh first hit the stage as “Terri Fairchild,” having preemptively appropriated the surname of her then-boyfriend, Michael Fairchild. “He was at Wesley, and I was at Sarah Lawrence, and we were head-to-head in my one summer as a non-Equity player for $30 a week at Theater by the Sea in Wakefield, R.I. He said, ‘What kind of name is Terri Sue for you? Anything else?’ I said, ‘Well, I was called Tovah in Sunday School’—he was Christian, and I didn’t want to say Jewish School—and he said, ‘Tovah! Now, that’s a name!’ I became Tovah Feldshuh out of love.”

It’s a name rich in positive attributes, she points out with some pride. “It means ‘good’ in Hebrew, it means ‘dove’ in Danish, and it’s the abbreviation for ‘friend’ in Russian. A name is a moniker where it’s easy to do shorthand about another person. If you’re Robert De Niro, people figure you’re Italian. With Tovah Feldshuh, they say ‘Is she European? Is she Israeli? She must be an expert in Judaism, and of course she’s got to be Jewish.’ I was none of those things, except the last. I was an American Jew and a cheerleader from Quaker Ridge School.”

Her first time out under her new name was in the 1973 musical Cyrano that won Christopher Plummer a Tony. She was a fruit vendor and billed 13th. “I was in the chorus, basically—14 lines in a red dress—but Yentl came along 18 months later and changed my whole life.”

Based on Isaac Bashevis Singer’s short story Yentl the Yeshiva Boy, the show focuses on the gender-bending adventures of a knowledge-hungry young woman who, disguised as a man, enters a yeshiva to study Talmud. It was an easy role for Feldshuh to slip into. “I was a very curious student, very diligent about my own education, so I auditioned for the play out in Brooklyn, and they gave it to me.” After an Off-Broadway run in Chelsea, it moved uptown.

So simultaneously, Yentl and Tovah became new words for Broadway. The role won Feldshuh her first Tony nomination. By the time she got her fourth and final nomination, she had gone from Yentl the Yeshiva boy to Israeli Prime Minister Golda Meir. Her Golda’s Balcony set the record for the longest-running one-woman play in Broadway history (493 performances, starting in October of 2003). It’s a part that won Ingrid Bergman a posthumous Emmy, and now Helen Mirren is going for Oscar gold with it.

Somehow, the actress found time to pen her first memoir, just published by The Hachette Book Group as Lilyville: Mother, Daughter and Other Roles I’ve Played. Those “Other Roles” constitute quite a galley. In addition to the aforementioned Ruths and Golda Meir (whom she also played twice on screen), there are Katharine Hepburn, Sophie Tucker, Sarah Bernhardt, Diana Vreeland, Tallulah Bankhead, Leona (“Queen of Mean”) Helmsley, Stella Adler, three queens of Henry VIII and nine Jews from birth to death in Hello Muddah, Hello Fadduh!

“I invest a lot of time, energy and love in honoring these souls—and why not?” Feldshuh argues. “It’s so much cheaper than therapy. This is really a wonderful way to earn a living.” 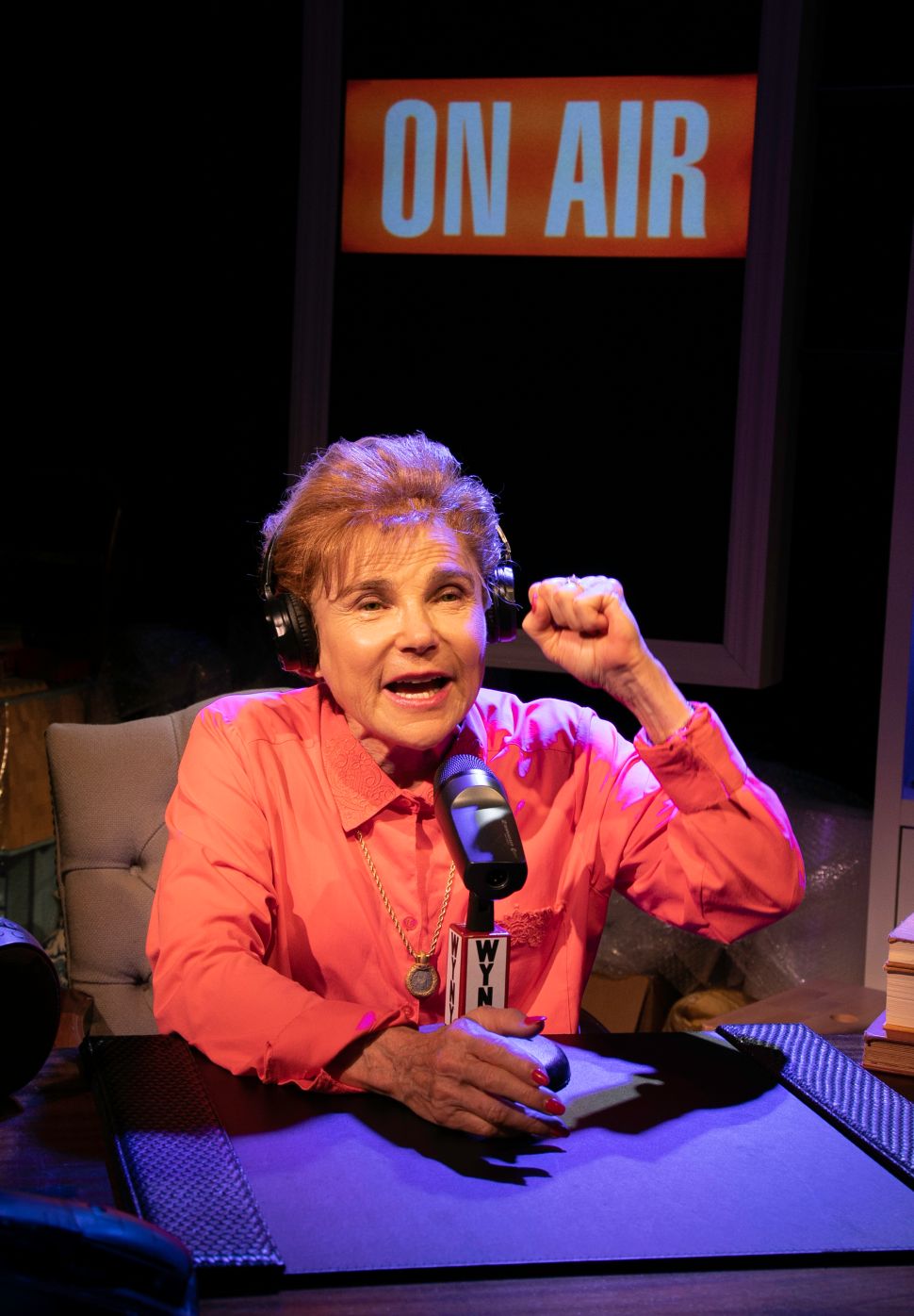