This week, Station Eleven continues with two new episodes, “Rosenkranz and Gildenstern Aren’t Dead” and “The Severn City Airport.” Paired together, these chapters expand Station Eleven in every direction, introducing us to more characters from the present day and tracing the consequences of their actions 20 years down the road. The miniseries continues to navigate a vast emotional spectrum, somehow everywhere at once without losing its center. The key question these two episodes seem to be posing is: “How much of the past do you want in your future?”

In “Rosencrantz and Gildenstern Aren’t Dead,” the Traveling Symphony returns to Pingtree, an old touring stop where their former director Gil (David Cross, Arrested Development) has settled down. Kirsten (Mackenzie Davis) is still shaken by her recent encounter with the mysterious stranger who has attempted to lure her young friend Alex (Philippine Velge) away from the Symphony and, somehow, spouts quotations from the graphic novel Station Eleven. (Kirsten believes she possesses the book’s only copy.) At Pinetree, she learns that her suspicions about the stranger were well-founded — he arrived in town weeks earlier and somehow convinced all of its children to leave with him. He calls himself the Prophet, and he preaches that only “post-pans,” people born after the pandemic, are free from the corruption of the past and they must leave their families behind. His philosophy seems to be torn directly from the pages of Station Eleven.

As in the previous Year 20 episode, “A Hawk from a Handsaw,” terror and tragedy serve mostly as bookends to the episode while the meat of the text is dedicated to family drama. Kirsten struggles to protect Alex, her surrogate younger sister, from a dangerous influence, which forces her to flash back to her own contentious relationship with accidental guardian Jeevan during the first year of the flu. Troupe member Wendy (Deborah Cox, First Wives Club) has rewritten Hamlet in the vernacular of the 1990s grunge scene, which Conductor Sara hastily adopts in order to prove the Symphony’s relevance to Gil, her former partner. While some of the cast is aghast at the very idea of rewriting the Bard, the production is a hit. Coincidentally, the new staging casts Alex in the leading role for a change, reinforcing her desire to break from the Symphony’s cautious routine and set out on her own.

The Prophet tells his followers that “there is no before.” It’s another cryptic phrase cribbed from “Station Eleven,” whose allure draws the young away from those still haunted by a past they can barely fathom. One can easily imagine why someone would choose to start over rather than carry on the traditions of a dead world. But whatever his means, the episode’s chilling finale demonstrates the Prophet is capable of acts of unspeakable evil. The ending of “Rosencrantz and Guildenstern Aren’t Dead” is by far the darkest moment in the series to date, and it’s hard to imagine how the Year 20 storyline can recover its hopefulness. Nevertheless, the execution of this episode is absolutely sterling, owed to the deft direction of TV veteran Helen Shaver and writer Nick Cuse’s delicate management of tone. Despite this grisly twist, Station Eleven still hasn’t ventured into “misery porn” territory.

It helps that this week’s other episode, “The Severn City Airport,” is the series’ lightest yet. In this story, former actor Clark Thompson (David Wilmot, The Letter for the King) and about a hundred others become stranded at a Michigan airport terminal as the deadly flu pandemic runs rampant seemingly everywhere else on Earth. By some statistical miracle, no one at the Severn City Airport has brought the disease with them, and after grieving the loss of any loved ones not present, the survivors begin building a new ad-hoc society. Thompson finds purpose here, and charges himself with preserving the best of what’s left of the fallen world. “The Severn City Airport” doesn’t forgo suspense and horror elements altogether, but the episode offers a hint of farce as counterbalance.

Like Miranda, the lead of last week’s “Hurricane,” most of this episode’s central characters are tied to the late actor Arthur Leander. Clark was his closest friend and the executor of his will. Arthur’s ex-wife Elizabeth (Caitlin FitzGerald, Succession) and young son Tyler (Julian Obradors) arrived at Severn City on the same flight as Clark, redirected en route to Arthur’s Chicago funeral. Together with former security guard Miles (Milton Barnes, Utopia Falls), they form a new leading council for the airport, but Tyler isn’t entirely onboard with their plans to remain cloistered inside and build a temple to the lost world. Here we can see the beginning of the tug-of-war between past and future that will define the next generation, reverberating all the way into the events of Year 20 and the story of the Traveling Symphony.

When the reality of his situation reaches him, Clark mutters a bit of King Lear to himself: “The worst is not, so long as we can say ‘This is the worst.’” Having a character speak a story’s thesis statement aloud (using Shakespeare, no less) could easily play as heavy-handed, but on Station Eleven it resonates as more than a trite aphorism. Here is a line from a play written 400 years ago, by a man who survived a plague of his own. If this piece of the past is worth saving, then surely it’s not the only one. 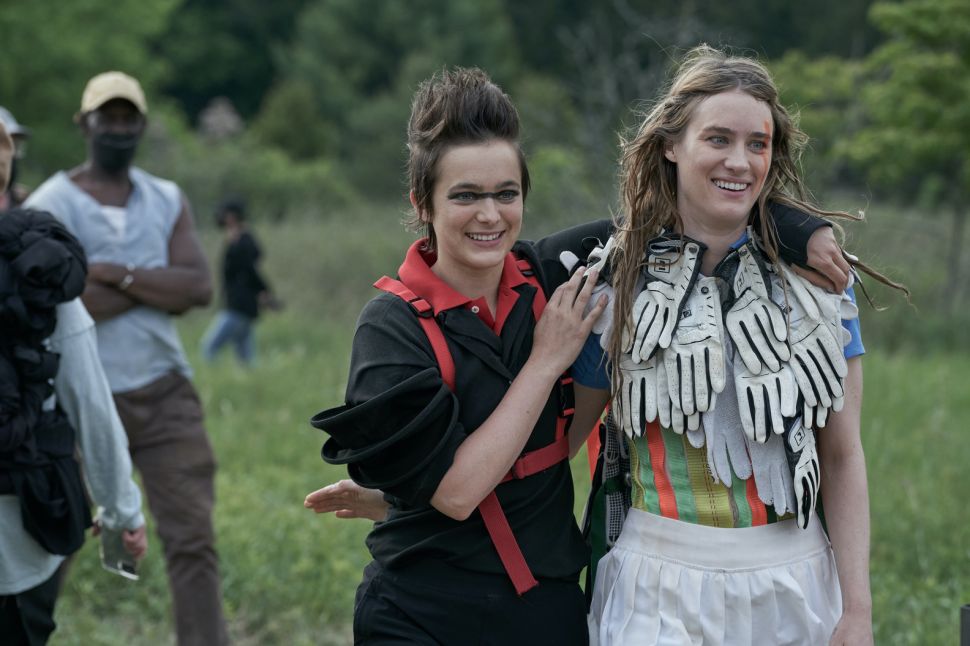