Ten years ago, playwright Lynn Nottage started interviewing the working-class citizens of Reading, PA—at the time one of the poorest cities in America, with a poverty rate above 40%. This resulted six years later in her second Pulitzer Prize-winning play, Sweat.

Her latest work—Clyde’s—now at the Hayes, could qualify as a companion piece. Whereas Sweat is a heavy-duty drama set in a bar in Reading, Clyde’s is a comedy that takes place in the chaotic kitchen of a truck-stop sandwich shop outside Reading on a stretch of road in Berks County, PA.

The kitchen staff of four, all of them relatively fresh from prison, are struggling with their newfound straight-and-narrow, trying to get on with their lives without backsliding into crime. This means meeting the pedestrian demands of the indiscriminate clientele—bland bits like ham and cheese on white bread—while entertaining and tantalizing each other with dreams of the perfect sandwich. These fantasies run rampant, from “Cubano sandwich with sour pickles, jalapeno aioli and sweet onions” to “peanut butter and grape jelly with cinnamon and nutmeg.”

Periodically sweeping through the kitchen is an emotional cyclone that crushes their hopes and dreams. This would be the titular proprietor of Clyde’s, a dynamic force of nature played by Uzo Aduba. An ex-con herself, Clyde doubles-down on the staff and uses every mean-spirited, manipulative trick in the book to keep them under her thumb.

She comes with a centrifugal force that seems to level everything in sight, a towering figure of strength. Wikipedia puts that tower at five foot seven—one inch more than IMDB. The actress, it turns out, is five foot three. Chalk the extra inches up to her considerable acting mojo.

An empathetic Aduba—born in Boston to Nigerian parents—understands how her character went off the rails. “At one point,” she theorizes, “Clyde had one of the softest and most easily bruised interiors, and, to protect that, she has had to create a tough exterior. I think she’s a woman who was a big dreamer, has seen every one of those dreams die and hopes to protect her employees from that same delicacy.”

In her Playbill interview, Aduba pursues this noble line as if she’s bucking for The Jean Hersholt Humanitarian Award. “I believe that Clyde makes it a really important mission for herself to ensure that they aren’t living in a fantasy world. She cannot be all bad. She does, after all, go out of her way to hire all of these people, the most forgotten people in our forgotten society.”

Montrellous (Ron Cephas Jones of This Is Us) is more or less the leader of this motley kitchen crew, a wise Zen-like presence who aspires to a sandwich so supreme it will put Clyde’s on the map (a goal not shared by management). Among the petty crooks who cook are Letitia/”Tish” (Kara Young), a Black single mom who stole “seizure medication” for her daughter, and Rafael (Reza Salazar), a Latino who tried a bank holdup with a BB gun. New to the demographic mix is Jason (Edmund Donovan), an angry Caucasian with white supremacist tattoos.

Most of Aduba’s watching is done from the wings or backstage. She has 13 costume changes during the play’s 95 minutes, and, while the cat’s away, the mice will play and play and play.

Indeed, the play proper is the interaction of the kitchen staff, their reactions to and recoveries from the many demoralizing bombing missions of Clyde. “I don’t count lines,” Aduba wisely notes, conceding that she has considerably less lines than her share. “I think this is more of an ensemble piece coming together, and that is the point of a play, is it not? Coming together?”

While the play speeds by without her, Aduba is seriously embroiled in preparing for her next annihilating walk-on. “We have quite a few quick changes, ranging from not just costumes themselves but also sometimes it’s a change of wigs, sometimes a quick change of nails.”

A team of two assists. “Jessie Mojica and Kate Sorg are their names, and they put it all together—the wigs, the nails, the clothing—for every single performance. The three of us do that every change—pinning and changing nails and shoes. Everything changes with every look. It’s very important to me and our costume designer, Jennifer Mueller, that we didn’t keep only one earring or one nail for the entirety of the play. Everything is very specific and deliberate with a woman like Clyde. She would never wear the same nails because it was just convenient.”

Clyde’s is Aduba’s first opportunity to work with Nottage and her Sweat director, Kate Whoriskey. “Both,” she says, “are incredible artists—creative and intelligent women who have collaboration between them and extend that invitation out to all of us on stage. They’re open and smart. I’m just grateful to share in their space and be part of this original Broadway cast.”

As for Clyde’s own criminal misstep, Aduba thinks that Nottage was wise to keep it a blur. (It is rumored that her lover changed “the safe word” on her, and Clyde forgot it. She herself admits her abuser won’t be doing that again.) “Why she was incarcerated is less important than how she came to be the woman she is. Her time in prison wasn’t what made her the woman she is. She’s really there to serve as a reflection of the world and how it treats a woman like her.”

Prison-wise, this is not Aduba’s first time at the rodeo, of course. She is best-known for the role of  Suzanne “Crazy Eyes” Warren, a highly combustible, maximum-security inmate on the Netflix series, Orange Is the New Black (2013-2019). The part won her an Emmy as 2014’s Outstanding Guest Actress in a Comedy Series and another Emmy as 2015’s Outstanding Supporting Actress in a Drama Series. She and Ed Asner are the only two actors to win Emmys in both the comedy and the drama categories for the same role.

Playing quite a different Shirley—New York Congresswoman Shirley Chisholm—won Aduba a 2020 Emmy for Outstanding Supporting Actress in a Limited Series in the Hulu miniseries Mrs. America. Making Aduba, Asner and Cloris Leachman are the only people ever to win in three different Emmy categories.

And yes, she was up for another Emmy this year, playing Dr. Brooke Taylor, a therapist and a patient in the fourth season of HBO’s In Treatment. (Though she lost out to Olivia Coleman, don’t despair: she’s also nominated for a Golden Globe and a Critics’ Choice Award.)

Her In Treatment role is another mesmerizing performance that screams quiet strength. “I’d never done anything like that,” she admits. “It was like doing a play on screen—two people sitting, not moving much, just talking. It came at a right time for me and challenged me in a way I hadn’t been before.”

Clyde’s will run through Jan. 16, with the probability of extending till Jan. 30. Aduba knows exactly what she’ll be doing after that, but, relegating me to the kitchen help, she’s not telling. 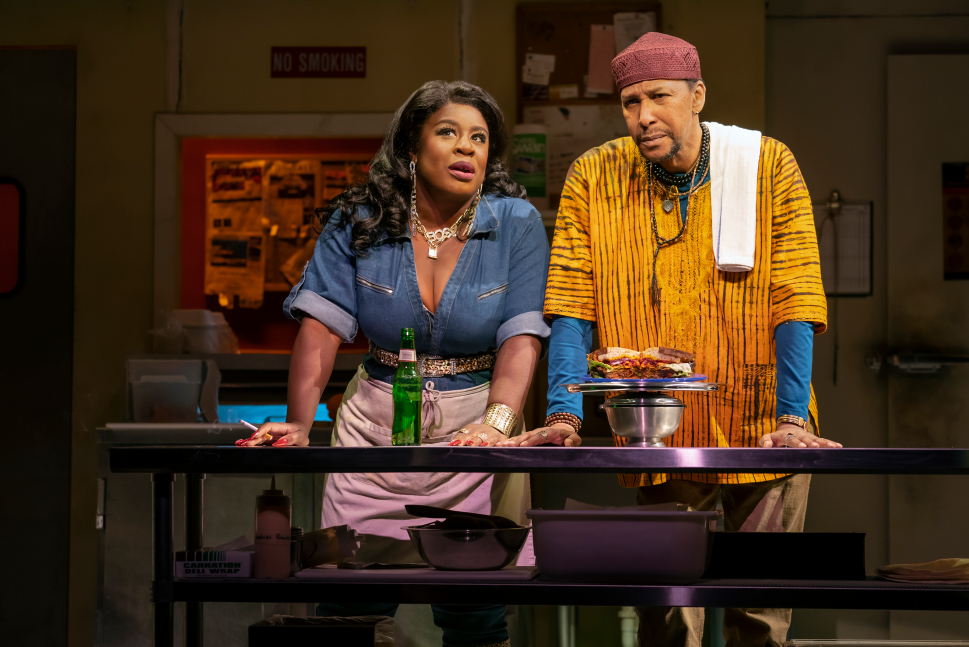