It’s a big week for big content on all of the biggest streaming platforms. Netflix, Amazon Prime Video, and HBO Max all have massive new projects headed straight to your screens, from a Riz Ahmed alien invasion-slash-family drama to the return of Sex and the City. There’s plenty to watch, so read on to find out what should be on your watchlist.

In this crime drama, Sandra Bullock stars as a recently-released inmate who faces mounting challenges as she tries to readjust to life on the outside. Having been incarcerated for two decades over a violent crime, she’s got a lost sister to find and her victim’s vengeful family members to avoid. It’s a grim and gripping story, and between Viola Davis, Jon Bernthal, and Vincent D’Onofrio, the supporting cast is stacked enough to make it worth watching. The Unforgivable premieres Friday, December 10th.

If you want a superhero movie that doesn’t come with the baggage of a billion other spin-offs and sequels, then Fast Color is the perfect thing to watch this weekend. The film follows a woman with supernatural powers who must confront her complicated familial past, all while working to hide her abilities from ever-encroaching authorities who want to exploit them. It’s a movie that puts heart and soul back into a genre that tends to feel empty, anchored by a moving performance from Gugu Mbatha-Raw. Fast Color will be available to stream starting Saturday, December 11th.

Back to the Outback

I barely stopped to check the summary for the movie before I put it on this week’s list, because it just looks so cute. I’m a sucker for non-traditionally endearing animals being adorable-ified, so this critter flick jumped right out. In a Madagascar-esque caper, a group of zoo animals (including some of Australia’s deadliest snakes, spiders, and scorpions) plots their escape in the hopes of leaving the harsh judgments of their onlookers behind and returning to the Outback. Yes, it’s a kid’s movie, but why not live a little and watch something sweet? Back to the Outback premieres Friday, December 10th.

This irreverent cringe comedy is in a league of its own. Series creators Maya Erskine and Anna Konkle, both women in their mid-30s, play the 13-year-old versions of themselves to depict “middle school as it really happened” in the early 2000s. If that sounds too weird to work, think again—both of its two seasons have been nominated for Emmy’s, so it’s got the credentials to back its absurdities up. Pen15 is available to stream now.

I think it’s fair to say that everyone needs a little more Riz Ahmed in their lives. Between last year’s sensational Sound of Metal and this week’s Encounter, it looks like Amazon Prime Video has got your Riz-fix covered. Ahmed stars as Malik, a Marine veteran who must go to great lengths to protect his two sons from the violence erupting around them. It’s a more down-to-earth take on the alien invasion story, with much of the story centering around the difficulties Malik has connecting with and sheltering his children. Encounter premieres on streaming on Friday, December 10th.

Okay, so Carrie seems to have traded print for podcasting, and the Sex and the City cinematic universe now includes heroines of color. Progress! Whether you’re a Carrie, a Miranda, or a Charlotte (sorry, Samanthas—RIP, sort of), buckle up for the continuation of Sex and the City. And Just Like That… sees three-out-of-four of the New York women back to navigate life in their 50s. Between romance, fashion, podcasts, exes, and young adult children, the reboot looks to be both a new chapter and a new, diverse imagining of the City. The first two episodes of And Just Like That… premiered December 9th and are available to stream now. 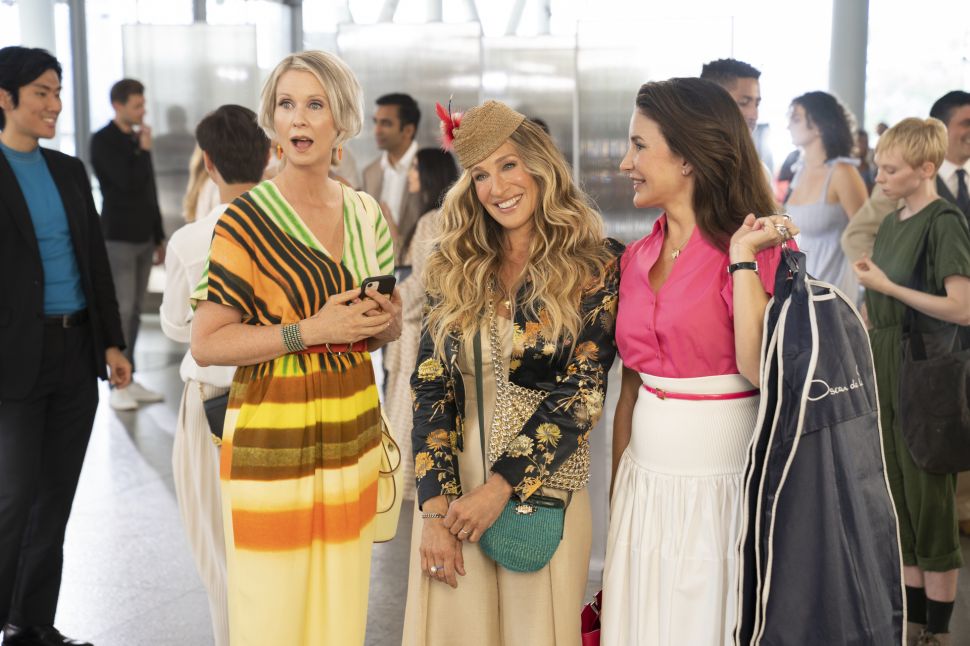