Willa Chasmsweet Wasserman’s paintings are the kind that stay with you for days. They give the viewer something new to experience in each interaction with her work. Wasserman describes her approach to painting, to Observer, as one in which you are meant to look “while adjusting your eyes.” This way of looking, and experiencing, is akin to that moment when you first wake up and are in the transitional condition between sleep and waking–-hypnopompic. In this state of consciousness, the brain is attempting to make connections between non-linear objects and larger associations.

This tension between perception and waking consciousness is what Wasserman’s paintings teeter on; larger split seconds of recognition of the self and the other. Put another way, these paintings offer a kind of dialectic, or way to psychically acknowledge the representation of the self in relationship to the parameters that Wasserman has set up for her viewers to experience; a psychoanalytic reading if you will. Wasserman’s work also speaks to a larger history surrounding queerness, desire, and intimacy that reverberates through her subject matter and the details she parses on the canvas.

Wasserman draws attention to the gaps in-between space, time, and recognition that often get overlooked historically, socially, and visually. Working predominantly with oil paints on metal surfaces and canvases, Wasserman channels a larger history of painting that is meant to translate to this contemporary moment and beyond. Thinking through larger representations of the self, lived experience, trans identity, and subverting old word techniques to create new meaning she is giving viewers insight into what could and can be. These themes are omnipresent in her work. And as a trained metal worker, this has also crept into her creative process in exciting ways.

“They feel like siblings to me. I think oil paint was invented to mimic flesh and be very valuable and moldable. And metal, especially because all metals have different properties. But brass is shockingly malleable and you can make it into what you want. And that feels kind of like painting. Paintings also change a lot over time and so does metal depending on the environment that it’s in,” Wasserman told Observer.

This relationship that Wasserman has forged between painting and metalworking has become a signature component of her art, something I wanted to know more about. On a brisk November afternoon, I made my way to Wasserman’s studio located in bustling Bushwick. Over the last two decades, Bushwick has built up a reputation for being a haven for creatives like Wasserman. This has resulted in a migration of many galleries and artists flocking to the area, taking over abandoned factories and transforming them into modern-day ateliers.

Wasserman welcomed me into her home and studio; despite only being in the space for about two weeks at the time of my visit, she seemed to be settling in comfortably. She recently relocated from Los Angeles to New York, however, this is a reunion. The Indiana native received her BFA from Hunter College followed by an MFA in painting from UCLA. And despite the fact that there is still a global pandemic raging, Wasserman has maintained a busy exhibition calendar; currently, Wasserman is showing her work at NADA Miami.

When you first enter the studio a red beaded curtain greets you. It gave way to a brightly light room with large windows covered with sheer canary yellow curtains. The room was lovingly cluttered with painting materials, sketchbooks, and rolled linens placed around in piles. Several pieces of linen and paper were hung on the wall. A hand-made metal cut palette with daps of oil paint already on it and a large easel sat at ready for Wasserman whenever the mood strikes her. We discuss our mutual love of the painter Joan Mitchell, how Wasserman’s studio practices have evolved, her affinity for egg sandwiches, but also just what is fundamental to a studio practice.

Her new projects are beginning to take form and I was there for a rare lull in her normally busy studio; This is also coming off  of her first solo exhibit with Downs & Ross gallery which closed on November 13. Wasserman, at the moment, is both living and working in a space, which is a first for her. And as a result, she has had to create boundaries for this new studio.

“I’ve established this space as my studio space. Like I don’t do other stuff here. I don’t let my phone up into the loft. It’s nice having a loft because when your bed is just in your room you always just like flopping onto the bed with my laptop and doing stuff. But it’s not really the case up here,” she said.

Wasserman’s new living situation however has allowed her to evolve. “I’m in a time and a space where there’s no drama, and I’m making it myself. And I feel like I’m an all-time painter now,” she said.

Wasserman noted that lately, she had been listening to a lot of the 1980s band TalkTalk, as well as Anne Briggs, a popular British folk singer from the 1960s. These musical influences among others, help to set a tone and also create a mood that Wasserman finds conducive to working. The idea of space in terms of music and art, and also the physicality of places came up several times throughout our visit.

“Space is for work and space for potential. I just want to give people space to figure out what they see. Rather than make declarative paintings, that’s why I paint so softly. It’s because I don’t want to tell you what it is, I just want to make room.” Wasserman said.

During our visit, Wasserman showed me a spool of silver that she had received in the mail. The iridescent strands were tightly wound and cool to the touch, maintaining an almost fairytale-like quality. While this object seemed incredibly special and tactile to me, a novice to the metal point tradition, this was exactly the kind of supply old world masters from centuries before would use to achieve the desired meticulous effect. Within the confines of Wassserman’s hip 2021 Brooklyn studio however, the silver spool has taken on new meaning.

In 2018, as an MFA student in UCLA’s famed painting program, Wasserman began experimenting with the Renaissance metal point tradition, applying it to her studio practice. This was born out of Wasserman’s previous experience as a metalworker and has since carried over into many of the paintings she creates today. Old world masters such as da Vinci, Jan Van Eyck, and others used sharpened pieces of metal such as silver on a prepared surface, usually using gesso, to create precise and meticulous drawings. While elements of the tradition remain intact,  Wasserman has developed her process with it.

“I feel like with the metal point which is brass and will be silver soon, that has a material limit of how dark or light it can go. That sort of establishes the boundaries of the paintings. I think I have a tendency to keep things close to the original or the surface,” she said.

Wasserman generally begins by drawing with a piece of steel wool either on a piece of paper or directly onto stretched linen. From there, her work starts to take on various forms and it also helps establish the parameters in which she’s working. This can be seen in convex paintings in which Wasserman paints directly onto pieces of metal, usually brass or blackened steel. Using delicate brush strokes, Wasserman animates the canvas with soft muted tones that create ethereal and hazy images that are meant to make the viewer adjust their view.

In 858 by Emily Dickinson in which I read “chasmsweet” while I couldn’t sleep, this larger sense of space and the visual representation of the body is explored in an exciting way. Creamy hues of cornsilk yellows, subtle marigold oranges, and eggshell whites blend to create a dizzying scene of both recognition and misrecognition. A suspended body emerges from the foreground with their back to the viewer and long hair cascading down from the side as they look to the left with their arm extended by their head. The body gives way to what appears to be a statue or bust on a pedestal. Yellow and white brushstrokes take over the canvas and mold around the forms all while creating a large sense of order among larger

Untitled 7/11/21, is a magnificently intimate small 8”x8” painting on a piece of blackened metal. A headless naked torso with open legs confronts the viewer. Periwinkle purples and cornflower blues highlight the form against a black backdrop. The dreamlike form is assaulting and commands attention. There is an energy to this work and the others that vibrate through the surface and beyond. These moments of intimacy and intensity are what drive Wasserman’s work, and what brings art lovers running to bear witness. 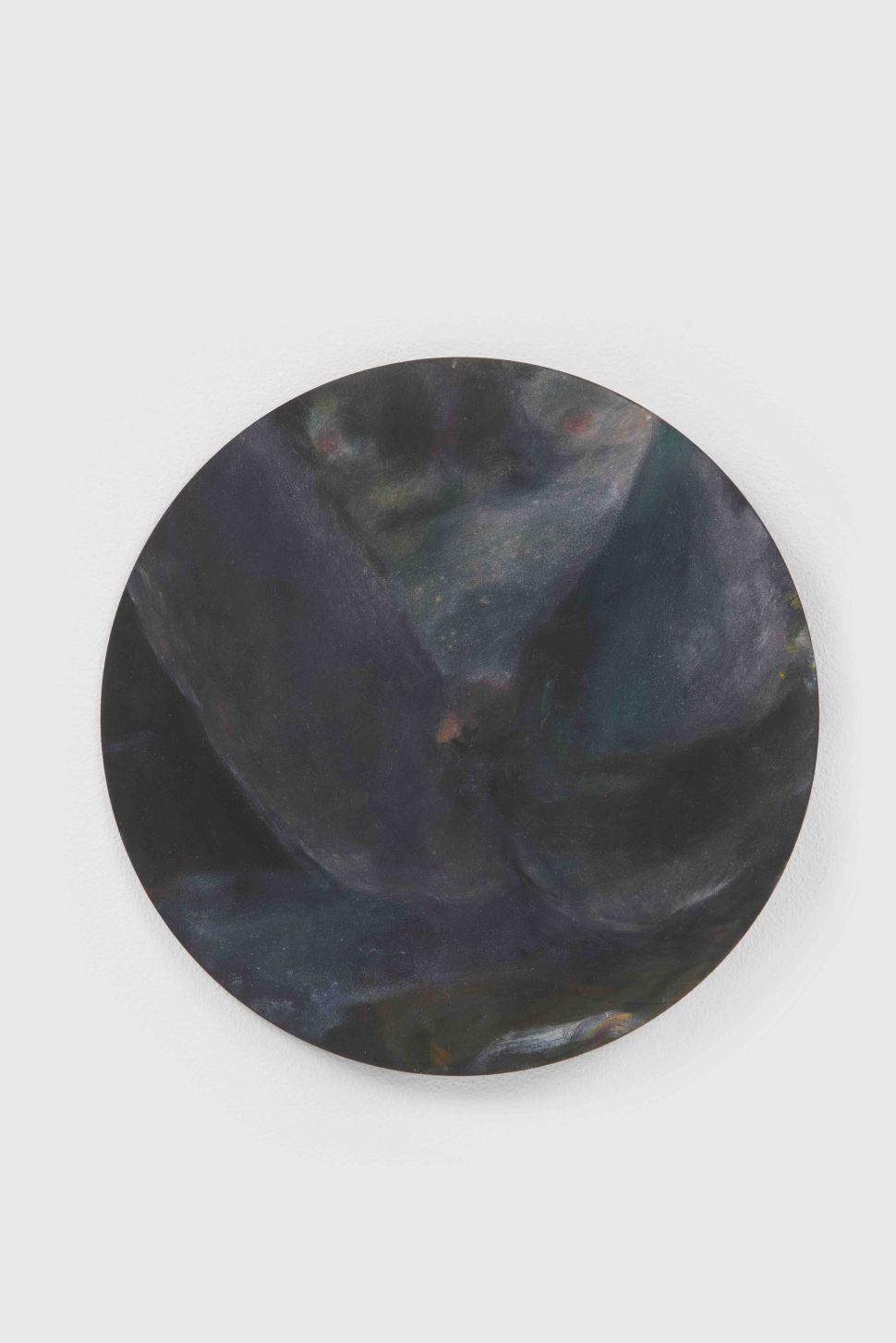