Late one night in 1939, Leonora Carrington’s lover Max Ernst was dragged away to a concentration camp. Carrington fled to Spain where she was institutionalized for insanity, a horrific experience she later chronicled in Down Below. Then in a storybook twist of fate, she seems to have escaped Europe in a submarine. After her odyssey, she lived for a time in New York, befriending Peggy Guggenheim and mixing with the in-crowd before permanently relocating to Mexico with her husband Renato Leduc. There she met many of the women of the Surrealist movement including Remedios Varo, Kati Horna, and Frida Kahlo. Understandably, later in life she preferred routine. Her inspiration still came from Tarot, Kabbalah, and talking hyenas, but she needed a room of her own. Carrington kept her imported tea under lock and key. She did not want a single tree in her front yard cut down, no matter the cost to her home.

Carrington has enjoyed a resurgence over the past few years, perhaps under a feminist attempt to reclaim Surrealism from the hands of men. She has received royal treatment at the Tate in her home country and reissues of her literary work stateside. In “Surrealism Beyond Borders,” her bold representational work stands out among the many more conceptual pieces on display. Self-Portrait, also known as Inn of the Dawn Horse, is one of the most striking images I’ve seen in a long time. I stood smiling in front of the painting, waiting for the other girls to move over as we all contemplated whether it would be gauche to take a selfie in front of it. Only seconds before, I’d been thinking about the commodification of art and identity. I snapped a picture anyway. My mother recently asked me what I saw in the picture. Terrified, I said I didn’t know, it just affected me.

Carrington spent much of her life in the presence of powerful men–whether her lovers, husbands, or curators. Her painting goes beyond self-representation; it does not demand the wide-eyed optimism of self-expression that often gets read into work by women. Too often art by women that is representational is deemed ‘valid’ or ‘a blow to the patriarchy,’ but Surrealist art often challenges clear notions of linear progress. After all, Carrington, like many Surrealist artists, was living under a fascist regime, in this case forced to relocate because Nazis had abducted her lover. If my own love of the painting comes from a love of women’s self-expression, it’s only a symptom of growing up in a culture obsessed with empowering women with the hope of selling them out—to magazines, to algorithms, to dieting pyramid schemes. None of this is antithetical to so-called identity politics, instead it only runs in tandem with capitalism’s cannibalistic desire to gnaw us out of presence. Instead, Self-Portrait shows a woman with her hair blazing and her horses ready to ride. Carrington is elusive, her self-portrait is a cynic’s fairy-tale. The white horse jumping outside, her command of a waiting beast, hands summoning something or someone. Most of all it is Carrington, sitting on a fairly normal blue chair, dressed in riding clothes and an everyday lavender jumper. She has what Joan Didion called self-respect, “It has nothing to do with the face of things, but concerns instead a separate peace, a private reconciliation.” I used to feel this was mere pull yourself up by the boots strap thinking, a sort of faux-grit. Now, after the past few years, I do believe there is something such as character and Carrington had it.

When we’re told to recall the Surrealists by a stern-looking art history teacher wearing a strange hat, we may think of René Magritte’s 1929 painting La Trahison des Images. An iconic painting that has been endlessly replicated, the words “Ceci n’est pas une pipe” appear under a pipe. We are told to doubt what we see. Surrealism began as an artistic movement after André Breton’s tract Manifeste du surréalisme first appeared in 1924. From then on, Breton was considered the de facto leader of the artistic movement, eventually dominating not just the conversation on Surrealism in literature but visual art as well, steering a submarine into the sea of the unconscious. The Metropolitan Museum of Art’s new exhibit, “Surrealism Beyond Borders,” seeks to change that conversation by collecting art spanning seventy years and featuring artists from 45 countries. Curated by Stephanie D’Alessandro and Matthew Gale, the giant exhibition is no small accomplishment.

The traditional Surrealist gang’s all here: Dalí, Chirico, Magritte, Breton, Ernst, Miró. The legacy of Dalí and Buñuel’s Un chien andalou is accounted for. Ultimately though, “Surrealism Beyond Borders” attempts to unite Surrealists across generations and geography to provoke discussion about colonialism, race, gender, and the anxiety of influence. Placards call attention to the inclusion of women artists and the legacy of appropriation; Maya Deren’s voyage into Voodoo is presented alongside the work of Haitian artist Hector Hyppolite.

Breton, our ghostly ringleader, greatly admired Hyppolite. Many of the global Surrealists were admired by Breton even if they were not included in his distinctly European circle. A notable exception is Frida Kahlo, who Breton held in high regard, though the distinction between muse and colleague was blurred. Kahlo, for her own part, was not impressed, calling many of the Surrealists “those European bitches.” This interplay of admiration and theft reached its peak when certain European Surrealist artists hung Hopi artifacts next to their own paintings, as if both were “surreal.” In a letter to his wife, the Cuban artist Wifredo Lam chronicled his experience of visiting the Surrealists in France, noting that he felt like “an exotic creature, like an African or Oceanic sculpture from the Pacific.”

Holding this contradiction in hand, many Black artists used Surrealism as an artistic strategy. Breton was friends with both Aimé Césaire and Suzanne Césaire, the latter of whom called surrealism “the tightrope of our hope.” The Black American artist Ted Joans called himself a “Sudanese Chirico.” Joans’ work features heavily in the exhibition, his long-running exquisite corpse collaborative drawing runs the length of a room. His magnificent Bird Lives! and What is mau mau what is surrealism are both enchanting. Joans once remarked, “Jazz is my religion, Surrealism is my point of view.” For a while, Joans, born in Cairo, Illinois, wrote to the Surrealist poet Joyce Mansour, who grew up in Cairo, Egypt, finding the coincidence too fitting to ignore.

Magritte called Surrealism the ability to “make ordinary objects shriek aloud.” Surrealism used dream-like imagery to expose the uncanny in the everyday, injecting fear into the blinking neon sign next to the bus stop. Many artists could not explain their practice with any coherent vocabulary; instead they worked toward what Breton called “pure psychic automatism.” Breton defined this quality as the ability to work without any conscious direction. Perhaps this is why Surrealism exposed the way fascism worked, by tapping into the terror that ran parallel to the picket fence. Someone’s always watching. In Holland, the Nazi regime worked to silence the work of Surrealist journal De Schone Zakdoek. The turn of art towards the weird in times of political turmoil is one of the uniting themes of the show. From British colonial rule in Egypt to omnipresent American racism, the exhibition details the way violence creates a turn to the mystical.

The exhibition’s stop in Cairo is particularly delightful. Ramses Younan’s Untitled stands out as a captivating image of a goddess against a cerulean sky, bending her limbs into a square. Mayo’s Coups de bâtons displays a chaotic exuberance, dizzying in scope with electric color. Against a suffocatingly flat gray background, bone-like figures entangle themselves amidst floating batons. Elsewhere, Juan Batlle Planas’s El mensaje is a delectably disturbing image. I occasionally suffer from sleep paralysis and the figures in this piece, reminiscent of Slenderman, remind me of the things I’ve seen from my bed. Works by lesser known artists shine in this exhibition, exposing the goal of surrealism– to tap into our primal emotions. There are many beautiful and haunting contributions from Dorothea Tanning’s Eine kleine Nachtmusik to Ithell Colquhoun’s Scylla but it would be treacherous not to mention Erna Rosenstein’s Ekrany. The painting reflects her personal reckoning with the Holocaust. Rosenstein recently had her first monographic exhibition outside of Poland at Hauser & Wirth. Unfortunately, it closed early due to the recent spike in COVID cases.

In the extensive exhibition catalog, Abigail Susik’s essay “Chicago,” notes the Chicago Surrealists anger over a Surrealist exhibition that condemned Surrealism “as an art movement of the past.” The same critique could perhaps be made of “Surrealism Beyond Borders.” While it attempts to negotiate the future possibilities of Surrealism, its most recent works date only to the 1980s. The future of surrealism is ongoing, its influence and legacy exists in a variety of artistic movements such as Afrosurrealism. The catalog details many works not featured in the exhibition for various reasons–work from Aleppo and Thailand both stand out. In the final exhibit some pieces don’t seem like obvious choices at all–is Yayoi Kusama a Surrealist? The exhibition’s wide sweep occasionally feels like a hindrance, creating much of the same problem Breton set up around canonization in his early definitions of Surrealism.

The ultimate achievement of this exhibition is its hypnotic offering to the viewer. On my second visit, I couldn’t make it through half the exhibit in two hours. It’s an incredible achievement, exposing many to work they would never have seen otherwise. Walking through these works, we may feel thousands of tiny eyes peering back at us, asking us who holds the baton beyond the corner, and what will we do about it? Exiting the Met, I suddenly wanted to put on riding clothes and go in search of a submarine. I wanted to unlearn anything my art teachers in strange hats ever told me and follow my psychic intuition. I looked at the horses tied up in the park and wondered if they needed a dose of the surreal as badly as I did. 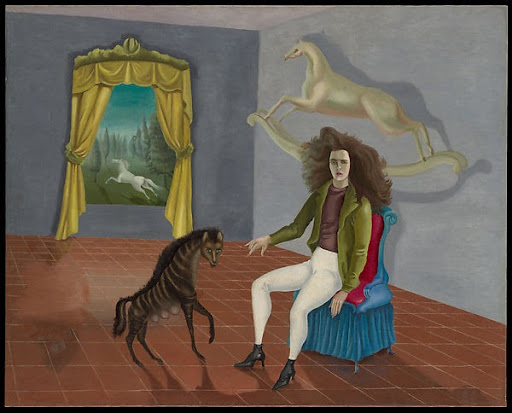