Zooming to its parking spot a million miles from Earth, the James Webb Space Telescope is out there, massive parasol unfurled, golden hexagonal panels ready to scrutinize billions of years of cosmic history. Will it find evidence of a Prime Mover? Civilization on a far exoplanet? Wherever the hell I left my keys?

Sorry for the space shtick; I’m under the planetary influence of The Search for Signs of Intelligent Life in the Universe, the iconic Lily Tomlin vehicle written by her partner Jane Wagner. It’s a play that asks big questions—What is Consciousness? What is Art? What is Life? —and comes up with big punch lines. Only Oscar Wilde or Steven Wright can touch Wagner for aphoristic density. (Sample zingers: “All my life, I’ve wanted to be somebody, but I see now I should have been more specific.” “What’s the point of being a hedonist if you’re not having a good time?”) Judiciously trimmed and starring Saturday Night Live veteran Cecily Strong, the current Search for Signs (through February 6 at The Shed) is, essentially, last woman standing in this cold, taxing January. So many shows had to close or postpone due to the omnipresent omicron, it’s left to Strong to keep hope for theater alive.

She is totally up for the challenge: After a decade on SNL, Strong has honed the skills that make her such an appealing and gutsy comedian. Her forte is the absurdly assured lady who refuses to let anything get in the way of making her unhinged point. At the same time, in that recent fusillade of bonbons, Schmigadoon!, Strong got to show her sensitive, romantic side as a modern woman trapped in a world of musical-theater clichés. Brashness and vulnerability are key ingredients in Strong’s very winning and limber performance. In an eyeblink she pivots from homeless, garbage-collecting savant Trudy (tour guide for a bunch of Earth-curious extraterrestrials), to a punk-rock teen and a dozen other men and women trying to find happiness or sense on this complicated blue ball.

Since it first appeared during the Reagan Administration the material has been inseparable from Tomlin. Anyone who saw the 1991 movie version (or the Broadway runs in 1985 and 2000) knows that Wagner’s interwoven collage of stand-up philosophizing and solo portraiture heavily depends on Tomlin’s genius for disappearing into character, as well as her tireless, athletic physicality. Part of the actress’s appeal has always been a cool, sardonic remove; it’s an excellent base on which to project a range of moods—smart, dumb, angry, broken—for her myriad of characters.

Strong’s modulation between characters isn’t as radically chameleonic as Tomlin, but still quite effective, and always attuned to Wagner’s durable, elegant lines. Her Trudy is a natural performer, eager to explain how she went crazy and came into contact with her “space chums.” Wagner writes across age and gender, and Strong’s equally convincing as a gym dude who wistfully recalls donating sperm to a lesbian couple; the perturbed punk rocker Agnus Angst; a pair of loquacious sex workers; and Kate, a pampered New York society lady whose frosty façade hides a sympathetic heart. Characters cross each other’s storylines, several of them converging outside Carnegie Hall. In the second half, we get a more cohesive story of four women whose friendship is tested over the 1970s and ’80s by marriage, children, and suicide. Most of the emotional payoff happens as the first and second halves of the piece converge.

Wagner’s message is a simple but deeply humanistic one: We’re all specks in the universe, random, unknowable bio-containers, and who knows where my atoms end and yours begin? Expertly staged by Leigh Silverman on a minimal, exposed-backstage set by Mary Hamrick and Christine Jones, with effective, Foley-ish sound accents by Elisheba Ittoop, Search for Signs is a warm sweater and mug of herbal tea that invites you to pause and muse upon the mystery of the universe. Until the Webb discovers someone or something out there to explain exactly why we’re here, we’re stuck with mere laughter. 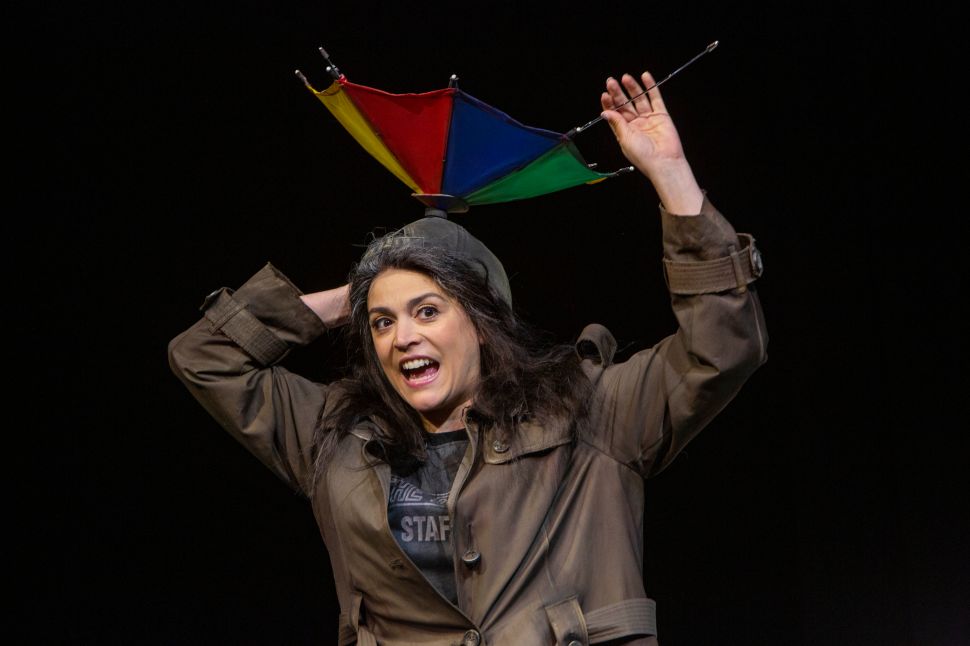