Adan Canto is no stranger to playing burly, powerful characters across film and television. But when he was first approached in early 2020 about  a leading role in FOX’s The Cleaning Lady, the Mexican actor—who is best known for his role as Sunspot in X-Men: Days of Future Past and who had just finished a three-season run on Designated Survivor—could tell that something was different.

The show executive producers Melissa Carter and Miranda Kwok pitched him was unusually compelling. So was the character he’d play. “It was just an opportunity to visit the realms of Northern Mexico culture, growing up in the States, and what kind of personalities or people it creates,” Canto told Observer. “And then you throw it in the blender of the Las Vegas crime syndicate, and then you get what you get, which is pretty fantastic.”

Developed by Kwok (The 100) and based on the 2017 Argentine series La chica que limpia, The Cleaning Lady centers on Thony de la Rosa (Daredevil’s Élodie Yung), a whip-smart Cambodian doctor who travels to the U.S. to seek treatment for her ailing son, who suffers from a life-threatening immunodeficiency disorder. She’s working for a cleaning service, but when the system fails and pushes her into hiding, Thony has an unexpected run-in with Arman Morales (Canto)—the lieutenant of a powerful crime syndicate—and begins to clean up murder scenes for his operation, using her guile to save her son and forge her own path in the criminal underworld.

In a recent video interview, Canto spoke about the evolution of Arman’s rocky relationships with Thony and his boss Hayak (Navid Negahban), the show’s timely exploration of immigration and undocumented migration, and how he has navigated the typecasting of Latino actors in Hollywood.

Observer: What was it about the character of Arman that immediately appealed to you?

Adan Canto: One of the things that I found amazingly attractive was this dichotomy that’s constantly within him. I like to see him as a gangster with a solid moral compass. His upbringing is of a certain kind, with hard-working, decent parents from the North of Mexico. He values work, honor and reliability, and you would look at that and think, “That’s virtuous. It’s good.” But then he finds himself in this world, this crime syndicate, and that doesn’t change his structure, his foundation. So I found it interesting to see how this world affected him and how he functioned in this world, and what kind of a ruthless personality it created. Because once Arman decides to do something or he knows what route must be taken, there’s no question about it, and this sort of burly, ruthless, powerful personality that you see probably comes from that. There is a strong belief in what he’s doing—there’s no doubt in his mind that it’s the right thing—and he won’t back down.

From the moment that they meet at an underground fight, Arman seems to take a special liking to Thony, even if his intentions aren’t entirely clear. What do you think he really sees in her, and what does he want to get out of that relationship? Is it personal or simply transactional?

To be honest, I think it’s one of those things where he might not have a plan. There was obviously a plan in the beginning. It was convenient, she cleaned up their messes super effectively, and that’s helpful. But once he gets to know her heart, I don’t think he has a solid plan there. I think he’s just scrambling to keep her alive and then, yes, she keeps working for them, and that’s good. I don’t think he’s maliciously calculated towards her—at least right now, I don’t see that. I think he sees those values of a hard-working human being that just is focused on helping her family and making sure that they make it through and that they survive.

In the pilot, Arman tells Thony that they’re both in a country that’s not their own, they don’t have the same privileges and and they seem to share an implicit understanding of the struggles that immigrants—and especially people of color—face in pursuit of the American Dream. How does their initial connection deepen as they become more entangled in each other’s lives?

Well, survival is a massive element here. We’re talking about the purity of a young boy that has to go through the health issues that he’s going through. There are stories out there of children going through things like that, and it’s a devastating thing, and you want to do as much as you can to help. It’s one of the elements that I found irresistible in the story. I have a one-and-a-half year old boy [named Roman], and there’s something amazing that happens in your heart when you see innocence, purity like that. You want to do everything in your power to protect it and to see it through. So that’s an element that we can’t ignore in their relationship that pushes it to dimensions that, honestly, I don’t think Arman even knows where he’s going or where it’s taking him. (Laughs.)

Thony and Arman are both married to other people, but they share a connection that is central to the intrigue of the show. Is there also some twisted romantic potential there, or do you think it’s a case of fatal attraction?

I don’t know if you can separate the two. I think there’s something that happens when you’re in survival mode and having to go through all of these incredibly complicated situations. It creates a bond that’s hard to compare to any other kind of relationship, right? So I think they’re discovering it as they’re going, and I don’t want to give away too much, but you’ll see.

What has it been like to work opposite Élodie?

Fantastic. It’s just been—for a lack of a better word—so easy. It’s easy when your castmates have done the work of understanding the world, and they have such a well-defined character that they’re bringing to the table, where you don’t have to plan things out. You’re bringing your backstory, your needs, your objectives, and let’s see where it takes us. We do it in many different ways over and over again until we find the sweet spot of the scene that we’re doing, so it’s been delightful.

She’s very much connected to finding the truth of her character, the truth of the situation that she’s in, and we’ve had a blast. And the crew has been a dream. These guys are immaculate, and above all, they’re just great, warm human beings. I think we formed a pretty awesome family [during the pandemic].

Arman has this looming sense of power over Thony, but he feels largely powerless when it comes to Hayak Barsamian, the true leader of the organization. In the next episode, he has to collect “donations” for Hayak’s daughter’s wedding, revealing a soapy secret from their pasts. How would you say that contentious relationship evolves as Arman begins to reach his breaking point?

I think he’s discovering what position he actually holds within this family. He thought that he was part of the family in one way or another. He’s immensely reliable to Hayak—certainly indispensable. But then, as time goes by, he realizes that he’s probably not that solid in the position he holds, so I think he starts to understand that he’s going to have to create a strategy of his own to solidify his position in his life and in this “Barsamian” syndicate. It’s pretty interesting where it leads, and working opposite Navid has been phenomenal. He’s just a delight to work with.

It’s no secret that Latino actors have historically been tasked with portraying gangsters or mobsters in crime dramas, but it really becomes an issue when those characters are dehumanized or not grounded in any kind of reality or relatability. How do you think this show subverts that common trope for Latino actors?

Well, I think it has good foundations. One of the things that I admire and respect from Miranda and Melissa is they were careful to make sure we had a solid backstory to every character, and they used real stories. You might be living a good, honorable life, but then tragedy meets you and you find yourself in an ecosystem where the rules are different, and you have to scramble to make ends meet. And then, inevitably, you find yourself a criminal or something like that. So I think that the choices are very well carved out to take you to the point of where the characters find themselves today.

I wouldn’t have liked the idea to play a gangster just to play a gangster because it’s cool. No, I like this complexity, this dichotomy, within my character, and everybody has a reason for why they do what they do. [Hayak] is certainly fighting for his own justice and he’s a patriot, so eventually, you’ll get to know all of these things.

You originally began your career in Mexico, and you’ve made a successful transition to Hollywood in the last decade. How have you navigated the issues of typecasting in an industry that consistently tries to put you in very specific boxes?

That’s a good question. And to be honest, I don’t know if I had formed a specific strategy to navigate this. I was just honest with myself and with my team the whole way through. There were obviously certain characters or scripts that I read that I immediately went like, “Of course not! No!”

I know the Northern Mexican culture [because] I was raised in it, so I can tell when somebody is just scrambling to come up with a reality that’s far from [the actual] reality, so I honestly stuck with the honesty within myself. I didn’t want to do anything that didn’t sound or feel right, and I guess I’ve been blessed with good opportunities and I fought for other opportunities that weren’t necessarily handed over to me.

I auditioned like crazy just to get, for example, this last film with Halle [Berry called Bruised]. I had to work on his accent and study his upbringing, what kind of problems he had, what kind of parents he had, why he chose the path in life he did—all of these things really gave him a solid footing.

What are your ultimate hopes for The Cleaning Lady? What kinds of conversations do you hope this show will provoke?

I think we’ve mentioned just the very complex realities of the coyotes or the black market for organs. It’s just horrible! And even with this young boy’s situation, I find it very compelling to visit these realities and these kinds of issues and portray them as realistically as possible. I think it gets you to live vicariously. What would you do in a situation like that? How far would you go, or how would you mess with your moral compass to tilt it to find that end that is the “right” one? I think those are great conversations, and I think [we’re] arriving at that for sure.

The Cleaning Lady airs Mondays at 9 p.m. on FOX. 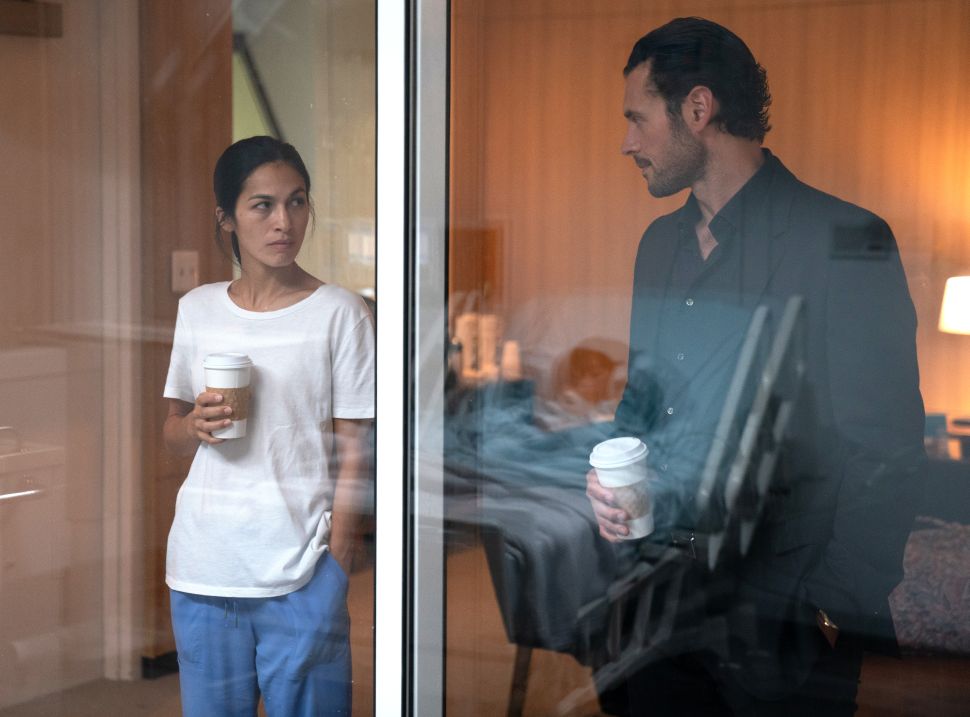