In May 2021, Australian art historian and TikToker Mary McGillivray went viral for using her knowledge of visual geometry to debunk a claim that Eurovision winners Måneskin were snorting cocaine in the green room. In her clip on the video-sharing app, she used her training in Renaissance art to map the angles and prove singer Damiano David’s nose couldn’t have touched the table.

Using the name @_theiconoclass, McGillivray has amassed nearly 400k followers on TikTok who tune in for her pithy, irreverent content about art. One of her most popular videos provides tongue-in-cheek explanations of artist styles. “If it looks like the chaos after blackout where everyone is stumbling around in the dark under one solitary emergency light, it’s a Caravaggio,” she explains in the clip, and “If there’s at least one person looking to the camera like they’re on The Office, it’s a Velázquez.”

Other videos praise Taylor Swift’s unintentional reference to how medieval iconography works and Lizzo and Cardi B’s hidden art history references in their Rumors music video. She also does a deep dive into the role of bananas in Maurizio Cattelan’s Comedian — a banana duct-taped to a wall — and Susan Gourley’s Half-Eaten Banana — actually recycled materials masquerading as a banana. As McGillivary ponders, “Are people more okay with [Gourley’s] artwork because it’s not a real banana? Do we feel more okay when the artist has carefully constructed the banana out of rubbish and then put it on the wall?”

McGillivray is part of an art history subculture on the video-sharing app that, despite being niche, has a huge following. Although the bite-sized clips could be dismissed as superficial, TikTok’s art historians are using the platform to explore points of view often excluded in more established spaces like galleries and museums.

Cordelia Noe, the founder of The Art Gorgeous media group and website sharing stories about creative endeavors around the world, is an advocate of TikTok’s art history content. “I think people and the art world have got a bit bored of Instagram, of the algorithms and the way of communicating there,” she tells Observer in explanation of the skyrocketing popularity of art-themed TikTok. The video-sharing platform is particularly appealing because “it is more fun, even a bit silly,” she says.

Colette Bernard, an artist living in New York City, turned to TikTok during the pandemic because of its refreshing informality. Like Noe, she noticed that TikTok seemed to provide a good platform for her content. “I got so many more followers than I had ever managed on Instagram,” she tells Observer. “People really want to comment and share and weigh in on things on TikTok.” Bernard describes the platform as “silly and informal” giving rise to a more accessible approach to content and education.

Bernard notes that one of her most popular series of videos was titled “Poopoo Peepee Art History.” It talked about toilet-related content in art, such as Maurizio Cattelan’s America. “It was so mind blowing to some people,” Bernard says. “If you take something that is so serious like art history and you approach it in a fun manner, I think that’s the best way to educate.”

TikToker Evan Hart, currently studying for a Master’s in Medieval Art and Civilisation, also appreciates the freedom from convention that the social network provides. “I can discuss more controversial topics or a number of different perspectives that certain [art] organizations would not be able to do,” Hart tells Observer. Posting under the name @evan.hart, Hart’s content focuses on women’s art, medieval iconography and paleography, while finding quirky angles like ‘Snistory’ (snail history), explaining the symbolism of snails in medieval art. “Old art has more in common with modern memes than might appear at first glance,” Hart says, “and it’s always interesting to find out little fun facts about secret messages or innuendos in art.”

The art history TikTokers are also interested in delving into topics like racism, misogyny and colonialism that are not often addressed in traditional art historical discourse. “If you come from art history courses or art history institutes, it’s still really more classically focused,” Noe says. “On TikTok, you get an insider’s perspective with an ironic undertone but also in a more accessible way.”

Dane Nakama, on TikTok as @umeboi and studying Fine Arts at the California Institute of the Arts, often spotlights discrimination and prejudice within the art world. In several videos, he looks at cultural erasure stemming from sexist and racist attitudes of the past. He also makes a point of approaching art through a non-eurocentric lens in order to open up the study to people who “thought they weren’t smart enough to understand art or that their voices were underrepresented,” as he says in one video.

Content creator Cassandra Rush, an art history student on TikTok as @pheauxtogenic, is becoming known for her short biographical videos about contemporary Black American artists. She began posting earlier this year about artists like Jammie Holmes and Tschabalala Self, only to find most people had never heard of them. “Some of the comments or direct messages I get on my videos are from different graduates of art that say they were never taught about any of these artists in school,” Rush tells Observer. “But how is that possible when we existed in those same spaces at the same time?”

Bernard similarly likes to feature art and artists frequently left out of the canon. One of Bernard’s most popular series focuses on public art, which she plans to extend next year with videos about public art around New York City. “When you highlight things that are not so traditional, it sparks people’s interest,” she says. “I try to emphasize on my page that your interests in the art world don’t have to be linear.”

Content like this has earned Bernard over 300k followers. Noe explains, “TikTok art history content has the potential to grow an audience rapidly because there is not this intimidation that you sometimes have with the more theoretically loaded sources.” As Bernard says, “Every time I make a video about art history whether it’s from today or a thousand years ago, I want people to be able to understand what I’m talking about and not think ‘I’ve never learned about this and I’m too scared to search it myself.’” Bernard notes how the informal format of TikTok also helps remove that sense of intimidation allowing more people to engage. “I can make a video with a towel on my head after having a shower and people are still going to listen,” she says.

With such an interest online, there’s hope that this might translate into real-life changes in the art world. Noe thinks it is an opportunity for art institutions to rethink how they appeal to a wider audience. “I believe it will have an impact on the way museum tours or digital content might be created and featured on content platforms,” she says. For Hart, “Art history content on TikTok rejuvenates and invigorates the discipline, putting new twists and perspectives on what may sometimes be considered a somewhat ‘stuffy’ discipline.”

For both Hart and Rush, an important objective is to engage an audience that may not feel welcome in the conventional art history world. “There’s less elitism involved [on TikTok],” Rush says. “You can choose to engage without needing a degree from Yale. No one is asking what your credentials are. Everyone is just there to engage and learn and show passion.” Rush herself says she didn’t feel comfortable visiting a museum until her 20s. “I want to cultivate the thought that we (Black people) also belong in these spaces […] Representation is everything to a young Black child.” 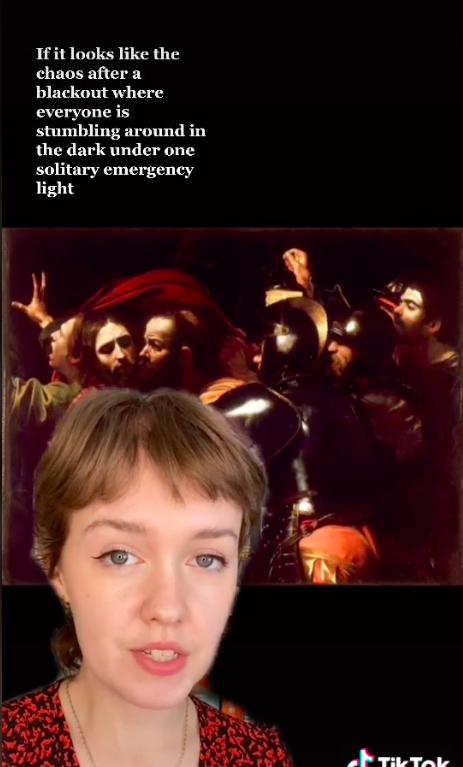