On Friday, at a Times Square intersection that boasts the title of highest-trafficked corner in the Western Hemisphere—developer David Levinson, the Chairman & CEO of L&L Holding Company, told Observer 54 million visitors trod on the area annually—a massive engineering project that’s long been in the works officially commenced. Over the next eight weeks, Broadway’s iconic Palace Theatre will be painstakingly raised 30 feet above street level so that surrounding construction can begin on TSX Broadway, a sprawling complex with robust dining and shopping options, a new hotel and a mammoth outdoor terrace. These new structures will cocoon the restored theater.

The $2.5 billion construction project, approved by the New York City Council in 2018, is being jointly developed by L&L Holding Company, Maefield Development and Fortress Investment Group. But before later-stage efforts can commence, an 109-year-old theater engineers told me weighs approximately 7,080 tons (14,160,000 pounds) has to be lifted 360 inches above the streets of Manhattan. I got pretty hung up on the hydraulics. The first words out of my mouth when I arrived at the construction site were “What is the unit of measure that describes the amount of energy necessary to move a building of this size?” (It’s kips).

On this particularly cold January afternoon, in the bowels of a concrete sub-basement that’ll eventually be transformed into a high-end retail hub, construction teams backslapped and posed for photos before the main event took place. TV camera crews hovered around a command station from which thick bunches of electrical chords were sprouting like black snakes.

A few switches were flipped, a pause hung in the air, and then the theatre’s huge steel beams groaned dramatically as mechanisms described as hybrids “between a structural steel shoring post and a hydraulic jack” slowly and almost imperceptibly lifted the enormous building three inches.

Urban Foundation/Engineering, the firm behind the hybrid hydraulics, has a track record when it comes to pulling off seemingly impossible feats. In 1998, Urban was tasked with transporting 42nd Street’s Empire Theater approximately 170 feet west; the move was partially conceived to accommodate developer Bruce Ratner’s desire to build a Madame Tussaud’s Wax Museum on the block. Using hydraulic jacks and rails that the Empire could roll on, the job was done in around six hours. “The building does not know it is being moved,” Tony Mazzo, then Urban’s senior vice president and now its president, said of the Empire.

Shortly after the Palace Theatre first opened its doors in 1913, it quickly became the “top of the heap” for dramatic and vaudeville performers trying to make their New York dreams come true; “Playing the Palace” became shorthand for making it as an actor. As such, those who prepared the Palace for its 2022 ascent and eventual reopening operate with reverence for the theater’s age and cultural significance.

“I’m very confident that when this theater opens, it’s going to be very well received by the public and the Broadway community,” David Levinson of L&L Holding Company told Observer on Thursday. “Not only are we going to be lifting up and fully restoring a very historic and important theater to its original glory and beauty, the backbone of that theater is going to be advanced technology. It’s going to be spacious, and safe.”

Levinson described an updated Palace that will include larger green and dressing rooms, wider staircases, elevators and a building that’s overall completely accessible to theater goers of various abilities. Sophisticated public spaces have certainly been missed. When the heavy curtain of the pandemic fell hard on New York City in 2020, Broadway theaters were among the first venues to collectively go dark.

Since then, stringent protocols have been put in place so theatrical spectacles can continue safely, but older theaters undeniably have smaller backstages and public spaces that could increase the risk of transmission. “I think that [the Palace] is going to trigger a need to improve all of the other Broadway theaters,” Levinson said.

One of the most impressive challenges posed by the development to its competition will almost certainly include the Podium, the planned new face of the building that’ll stretch from the ground floor to the 11th. Poised above the podium will be restaurants, a terrace, a 670 room hotel and an 18,000 square foot transactional sign, the largest in Times Square.

“What’s behind that sign is eight floors of experiential space, and perhaps the most amazing thing about it is that the sign actually opens up inward via massive 30 foot high doors,” Levinson said. Behind these doors? “A 4,000 square foot stage that’s directly opposite the [Times Square] red steps, with 250 seats.”

When it comes to grand-scale, immersive, technologically tricked-out spaces that could be used for anything from a concert to a product launch, this is about as 21st century as it gets. And it’s only fitting that the Palace Theatre will continue to operate while functioning as a new stage’s literal foundation. 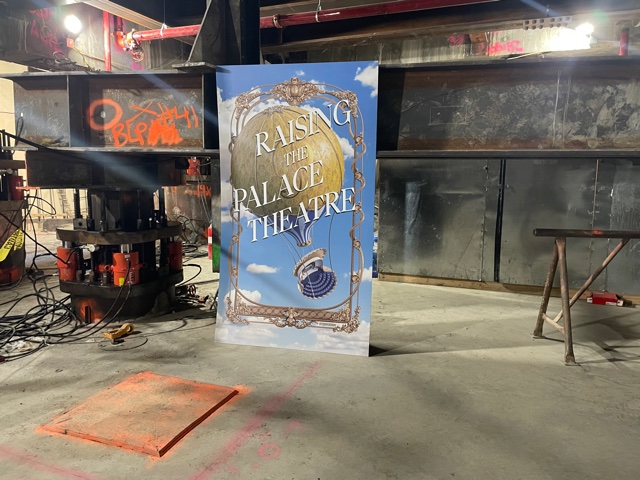