The August 4, 2020 explosion in Beirut’s port grabbed the world’s attention and made front-page headlines, drawing comparisons with Hiroshima and Nagasaki because of its reach, mushroom cloud shape, and fatal impact that killed over 200 people.

The Lebanese people described the blast retrospectively as something that had been previously felt in the air. It would only take so long before an accumulation of 30 years of mismanagement, corruption and a mafia-like relationship between the state and its citizens would finally explode. The clientelism that many benefited from did not lessen the ire against the political class directly blamed for its awareness of 2,750 tons of ammonium nitrate that were left in the port for six years waiting for disaster.

Perhaps no one felt the deathly descent headed by the same ruling class who once led the 1975-1990 civil war militias better than Charif Majdalani, who began writing a diary of the Kafkaesque situation in July of 2020. Majdalani, the renowned Francophone novelist whose oeuvre spans over eight novels, was in the midst of writing on his terrace when the “five-second apocalypse” happened. The events are described in harrowing detail in Beyrouth 2020: Journal d’un effondrement (which was speedily translated by Ruth Diver as Beirut 2020: The Collapse of a Civilisation, a Journal). Writers wrote hundreds of accounts, but few inject such pathos that compels us to tears, a testament to its literariness.

As the country continues its descent into inferno with the currency losing over 90 percent of its value, many people want answers, and writers are better poised to opine. Despite this, “it is impossible to know what is going to happen,” Majdalani told Observer. Initially scheduled to meet at his usual gathering point, Café de Pénélope, I was instead invited to his house when the light rain turned into torrential downpour by late morning.

Majdalani had just returned from a two-week long stint in France and Germany touring for his most recent novel Dernier Oasis, which he had spent years working on and finished in the summer of 2020, but postponed publishing until after having released A Diary of Collapse.

The narrator, an archaeologist asked to examine Assyrian friezes, finds himself in the heart of the biblical landscape of Iraq meditating on art and history in the summer of 2014. Yet when ISIS seizes Mosul and slaughters Christians and Yazidis of the Nineveh Plain, the idyllic oasis turns out to be appallingly closer to hell: drones, death and car bombs abound.

“In my last novel, I talk about history and the future. We can make lots of speculations, envision innumerable situations, but I do not think any will be right because history is going to walk the way it likes,” Majdalani said, as we sat on his couch and sipped Turkish coffee.

The book came up in the context of a topic I am personally interested in: Lebanon’s recent migration exodus. Both sets of my great-grandparents on my father’s side left the country over a century ago during the first migration wave and never returned.

“What is clear is that Christians are the most subjected to the crisis, notably since the explosion hit a primarily Christian area. This community is asking questions that aren’t appearing in the media. Mainly, in 20, 30, 50 years, what will happen to us?”

Following WWI, France secured Lebanon’s mandate and carved its borders to include as many Christians are possible, even though part of its population was Muslim or Druze. When discussing the somewhat sensitive topic of the future of Christianity, his speech was uncensored.

“I think more and more today – certainly Muslim intellectuals – know that Lebanon only existed because there are Christians, and that they themselves benefitted from a sort of democracy because Christians were there,” he said. “I think that the majority of other communities need Christians, because it allowed Lebanon to continue existing as they want it.”

While Lebanon’s historic relationship with France favored Christians, today the situation is more complicated. Notably, the late Sunni Prime Minister Rafic Hariri’s close relationship with former French President Jacques Chiraq in the ‘90s modified Sunni’s visions of France. Still, as English has become more widespread, there is an impression that Francophonie in the country is reversing.

“I do not agree with this because French was never a language that everyone spoke,” he said. “The difference is that those who speak English today, apart from a slice of people who are very cultivated, they do not speak it very well—they speak Globish, the English of the computer. Those who speak French, on the other hand, can read Le Canard Enchaîné, a French satirical newspaper, and understand the jokes in it.”

He compared himself to his daughter, Saria — just as referenced in his Diary — who had been attentively listening on one of the accent chairs in the spacious, modernly furnished living room. Majdalani was embarrassed to not be able to communicate in English and said that unlike Saria, his level was pitiable, and he could not even read a few pages of Faulkner, one of his greatest literary influences, in its original English.

Majdalani is also a professor of French literature at the Université Saint-Joseph in Beirut. I asked him if he thought that the scandal in early November — three Lebanese universities were accused of selling thousands of doctoral and master’s level graduation certificates to Iraqi students in return for payments in cash dollars — devalued the worth of a university degree.

In addition to corruption and the sectarian system, which he sees as inextricably linked, a major problem is the country’s inability to use their history beyond the point of arguing that the Arab world was once stronger than the West.

“When someone tells me this, I respond ‘Habibi we agree on this, but why do we always have to link to the other?’ Lebanon is a country that, for the last thirty years, has been waiting for the help of the international community, and only existed in a sense by how others view us. This is terrible and I think it continues and needs to stop.”

The upcoming elections set for March seem to provide some hope for autotomy. “Everyone that you will interview will tell you we are in a very dark, dark, tunnel and the only hope is maybe the elections. If it is well carried out, we can elect 20, maybe 25 opposition MPs and it is a start. How else will we get these guys out of there?”

Lebanese novelist Rachid el Daif, one of the most translated Lebanese authors, initially passed me Majdalani’s contact. Although both spent significant years in France and are considered among the most important literary figures in Lebanon’s landscape, the difference in backgrounds could not be more apparent. The former, who grew up in a small countryside village, learned French as a young adult and writes in Arabic, unlike Majdalani who grew up in Beirut in a Francophone family and started writing script scenarios in French for shows he was watching on a black and white television at 8-years-old. The difference of what it means to write in various languages is also stark.

“Unfortunately today literary recognition passes by a European language – either French or English – and so if we write directly in French it is as if we have taken a shortcut,” Majdalani concurred.

On my way out the door, I told Majdalani, in Arabic, that despite studying Arabic for five years and now pursuing a master’s in Arabic literature, translating a book in the language, speaking to both Rachid and my girlfriend only in Arabic, whenever I go to my university, the American University of Beirut, I wage a linguistic battle to speak this language.

“They need to speak to you in English to prove that they can speak it,”  he said. “Again, it’s the problem of the Lebanese, how they see others.” 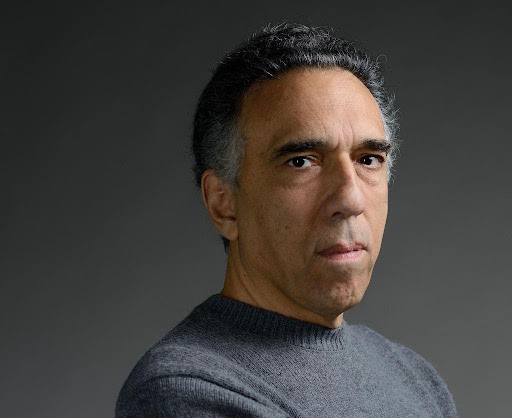