I have sat at this particular dinner table. Everyone’s yelling. The shouts, the cross-examinations, the retorts hurl over the tablecloth, colliding into each other, the impact of the blast sending them careening off in new directions. Someone is listening to the story, but gets offended by it halfway through. Another is telling a story from the past, a family myth, that old legend. There are corrections, shaking heads.

Claudia Durastanti’s latest novel came out January 25 from Riverhead Books and was translated from Italian by Elizabeth Harris, Strangers I Know, takes that dinner scene kryptonite  and injects it across the sprawling pages of a story set in Southern Italy, New York City, and London. The narrator unfurls a story that’s part documentary, part fiction, part literary criticism, all serving the novelist’s larger exploration of questions like “What is a family and how does it shape who we become?” There is an early reference to an Emily Dickinson poem – “After great pain, a formal feeling comes.” The narrator is still figuring out how to tell the story of her family, but also her own story, on every page. It’s a coming of age story spiked with the same brand of vitriol that springs up from works like Greta Gerwig’s Lady Bird and Virginia Woolf’s A Room of One’s Own.

The story starts with one account of how her parents met from her mother’s point of view and then quickly doubles back and retells the story from her father’s. It’s from this impasse – two adamant perspectives of reality, that the narrator comes into being, always between two nodes of truth. Her mother thinks she met her husband when he tried to jump off a bridge while her father thinks they met when he saved her from a robbery. Jumping back and forth between these two alleged origins, finally, the narrator’s own truth emerges.

There is another layer to the disputes about which account of the story is fact and which is fiction. Her parents are deaf, and the communication in the household is fraught. Sometimes this leads to hilarious miscommunications between them and their daughter, but other times it’s rather painful: “they didn’t know the meaning of the words ‘I love you,’ so they didn’t use them.” The narrator learns that their inability to communicate with each other led to the collapse of their marriage: “By day my father built houses; by night he wrecked marriages.”

Even more, the narrator and her brother have not learned sign language. It’s as if everyone in the house has developed their own way of interacting with the world. It’s only through living, both within and outside of the household, that the narrator can discover who she truly is, unbound from family myth. Once she’s set in motion at the start of the story like a top spinning out over a flat surface, as she lives more and endures more pain, becomes her own person. The novel’s structural perspective starts to spin off into new directions, the narrator has finally paved her own way.

“The vertigo of events that’s been left behind but has no relation to me, in spite of carrying my name.” Both bound to her family by blood and by heritage, she is both of and not of them. This comes into play later as she grows further apart from her family. At one point when her father has to undergo a serious operation, she asks “How can we suffer for someone when all we really share is a biological intimacy?” It’s this “duty” to family that Durastanti’s narrator is fascinated by  and asks the question of whether we can truly ever be absolved of our roots entirely, even as hard as we try.

But even as much as the narrator wants to strike out and be on her own “everywhere I went, I sensed rage and longing. An obsessive, hammering sense of change,” forging her own path, untied to any referential connection to the people who made her, she’s still uneasy out there, alone. Do we ever truly feel comfortable being ourselves? I laughed out loud when I read the narrator mention the place where she feels the most sane: “I only truly felt comfortable at the hair salon.”

The book is a series of snapshot moments in the young woman’s life. Stories of adolescence, love, and pain. The novel shifts ahead and back in time, the way memory often changes and slips over past memories and traumas. As she ages, events from her past take on new meaning, and they color the way she interacts with the world as she grows. For all her growth and the specific influences on her – punk music “back when I believed an album could turn me into a different person,” moving to New York, growing up with a Donald before there ever existed a President Trump, living in England, Brexit, reading novels, she is shaped by the capitalist machine. She is also fascinated with the idea of a family, what it is and how it works. “The story of a family is more like a map than a novel, and an autobiography is the summation of all the geologic ages you’ve passed through.”

The narrator struggles to formulate what self identity is. She is imprinted by the people who came before her, as she also aims to become her own, untethered to the past. Still, she knows that the conditions under which she was born, that she had left Italy behind and lived instead in America, inevitably shaped who she has and continued to become. What if it had been different, she wonders? “What would have happened to me if I’d been born someplace else, someplace at war [… ] Would I also have voted badly, to make America Great again? To emigrate means to live with all these self-ifs and hope that none of them get the upper hand.”

The summation of a life cannot merely be relegated to familial origins, though, as Strangers I Know aims to show. Durastanti’s narrator probes at the very idea that life itself cannot be captured fully – even in the pages of a book. For all the narrator does by hurtling against time, fighting back against the gravitational pull of her family’s legacy, and the trauma carried forward into their future but also her own future. For all the ways she strikes out and makes this life of hers her very own, a grim and sardonic rhetoric emerges towards the end of the book:

“When we die, maybe on our tombstone they’ll write a loved one’s name, what profession we had, a line from a favorite book.” 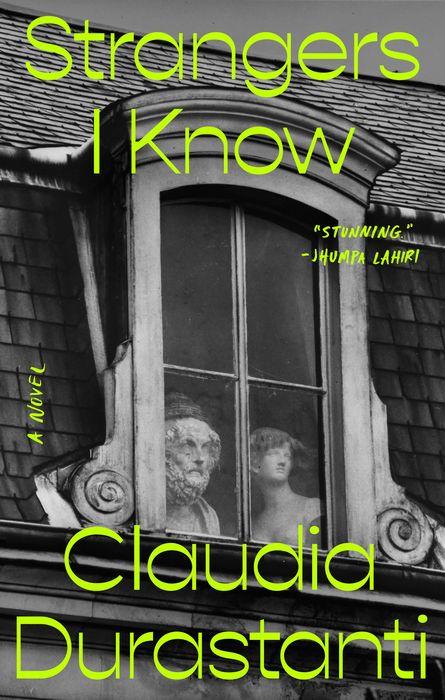