“You’re a very bad influence,” a character tells Emily Benetto mid-way through Emily the Criminal, writer-director John Patton Ford’s feature debut about a woman forced to go to extremes to pay off her student debts. In one sense, that’s true: Emily, played with intense complexity by Aubrey Plaza, has an unconventional set of morals that allows her to participate in increasingly dangerous criminal activities. On the other hand, our protagonist is simply trying to survive in a system that hasn’t been set up for her to do so.

The audience meets Emily during a job interview, where the interviewer tricks her into admitting to a past aggravated assault conviction. The character, currently working as a catering delivery person, is $70,000 deep in college debt and has an art school degree that’s doing her no favors. She desperately needs a better-paying job to make a dent in her loans, but, as becomes clear in the opening scene, there are certain expectations society has for us—and Emily doesn’t meet them. She’s trapped by her loans, by her criminal record, by the tedium of her life, and by her own inability to take real action.

All that changes, however, when Emily’s coworker offers her a phone number on a scrap of paper and the possibility to earn $200 in an hour. The offer seems too good to be true and, in some ways, it is. When Emily arrives to the job, Yusuf (Theo Rossi) sets her up with a stolen credit card and sends her into a store to buy a flatscreen TV—any flatscreen will do, he says. After the TV is loaded into a van, Emily gets an envelope of cash and an offer to return the next day for a bigger job for $2,000.

As Emily sinks farther into the criminal underworld, she finds herself more and more adept at gaming the system. Things go wrong—more than once—but she always manages to pick herself back up. Ford isn’t interested in a slick, high-speed thriller, and the action in Emily the Criminal feels grounded in reality. Plaza, whose dramatic presence is as compelling as her comedic skill, imbues the character with genuine vulnerability alongside her grit. When an attempt to steal a car goes amiss, Emily is palpably shaken, with Plaza embodying the trauma of the event in a jarring way. But what allows Emily to move past these terrifying moments is the anger that ripples underneath everything she does.

It would be easy to categorize Emily as an anti-hero, but that term seems to undermine how easily any one of us could be in her shoes. Her life is the reality of many: As of December, 44.7 million Americans had unpaid student loan debt. And how many of those individuals are confidently paying those loans back regularly? Ford based the story on some of his own experience struggling to pay off $90,000 in student loans and working as food delivery person to cover just the interest each month, and it’s an experience that many viewers will likely relate to. Where is the breaking point? When are we willing to do whatever it takes to make that debt go away?

For Emily, the answer is yes, even to violence and betrayal. She discovers how easy it is to evolve from doing coke in a bar bathroom to running her own credit card fraud ring. Watching her come into this side of herself is riveting, in part because we, too, wonder what we might be capable of. After the bungled car theft, Yusuf, who eventually becomes Emily’s confidant and lover, inquires, “You can’t make money another way?” She responds, pointedly, “You can’t make it another way?” This path, for Emily, is a choice brought on by having no choices at all.

The film—which premiered this week at Sundance—is a perfectly taut 90 minutes, and a standout moment for Plaza, who also produced. She’s most famous for comedies like Parks and Recreation, but Plaza’s work in indie films like Ingrid Goes West and Black Bear has long revealed another facet to her talent as an actor. Here, she’s undeniable, a pleasure to watch as she grapples with Emily’s increasingly complicated decisions. The final shots, which linger on Plaza’s face, reveal more than any dialogue ever could. Plaza’s ongoing determination to bring out the authenticity of the story actually makes the film darker than it would be as a traditional thriller. Her Emily is any of us, breaking free of a system intent on suppression. 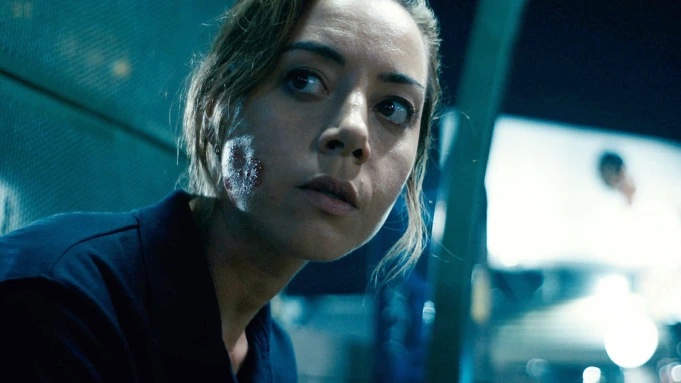