It’s a truth universally acknowledged that the wealthiest people in the world frequently turn to philanthropy to burnish their reputations, and Jeff Bezos is no exception: last summer, news broke that the Amazon CEO would be forking $200 million to the Smithsonian, marking the largest gift in the institution’s history since its inception. Arts and culture hubs across the country are emblazoned with the names of the ultra-rich, but Bezos’s gift is notably lacking a certain element: according to new reporting by MarketWatch, the agreement between Bezos and the Smithsonian does not include a “morals clause,” which is an arrangement that would have allowed the museum to cease the former’s naming rights if the name “Jeff Bezos” began to cast a pall over the organization. A representative for the Smithsonian reached out to Observer on Tuesday and said that the Smithsonian does not have any “morals clause” in its gift agreements.

In other words, the gift grants Bezos the right to have his name placed on different locations in the Air and Space Museum and in the Smithsonian itself for at least 50 years; that’s what $200 million buys, one supposes. A new glass wall in the National Air and Space Museum will also bear Bezos’s name alongside the names of other donors who’ve contributed $10 million or more.

Naming rights are totally standard when huge donations take place, but the Sackler scandal that’s unfolded over the past couple of years has illustrated that museums and arts institutions are ready and willing to take names down if the name is proven to be connected to awful wrongdoing. Because of the Sackler family’s deep links to the opioid crisis, museums have begun to distance themselves. Last December, the Metropolitan Museum of Art removed the Sackler name from seven of its galleries; the Met also announced that it would no longer accept gifts from the Sacklers in 2019.

Amazon’s labor issues are widely known, and criticism has been lobbed against Bezos, his vast wealth and his company’s policies for years. “Its not to say that the Smithsonian doesn’t have a right to acknowledge and express gratitude for the gift,” Ben Soskis, a historian of philanthropy, told MarketWatch. “I have no problem with his name being put on a donor wall. But Bezos’s identity now is certainly very complex. He represents many different things, and the Smithsonian is taking them all in. That to me suggests a real problem.”

Correction: A representative from the Smithsonian reached out to Observer to clarify that the Smithsonian does not have a “morals clause” in any its gift agreements; the article has been updated to reflect this. 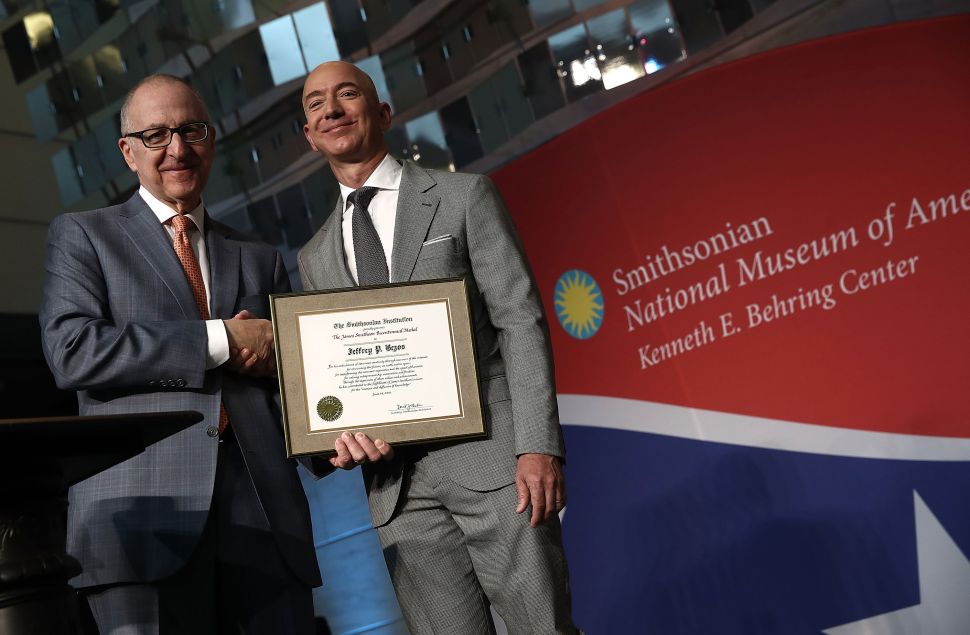