This week, after months of planning and a much longer period of controversy, the equestrian statue of president Theodore Roosevelt that stood in front of New York’s American Museum of Natural History is finally being systematically disassembled. Departing mayor Bill de Blasio first announced his intention to take the statue down in 2020 and the decision to relocate the statue, which has been resoundingly criticized for upholding racist and colonialist views about American leaders and their relationships to indigenous people, was finalized in 2021. In the interim, the statue has been frequently vandalized by protesters. Ahead of Columbus day last year, the statue was spattered with red paint.

The statue itself was commissioned by the Roosevelt Memorial Association in the 1930s and executed by the artist James Earle Fraser. According to the New York Times, several city agencies had to approve the removal process that’s now taking place; tens of workers and preservation experts are collectively toiling to take the sculpture down piece by piece. The process is costing around $2 million, and it requires many steps: a crane removed the part of the statue that constitute’s Roosevelt’s upper body this week, and the rest of the statue is going to be taken down over the next couple of days.

When the entirety of the statue has been successfully placed in storage, it will then be moved to the Theodore Roosevelt Presidential Library in Medora, N.D. The statue that Fraser created has drawn a significant amount of ire in recent years because of what it represents.  It depicts Roosevelt on horseback in an elevated position of power, while one indigenous man and one Black man flank Roosevelt on either side, clearly poised to do his bidding or guide him as necessary.

Across the country, leaders have been agreeing that objectionable or racist statuary should be removed from places of pride in major cities, but it’s been less clear what to do with them after that. Charlottesville’s statue of Stonewall Jackson was recently tussled over; the Museum of Contemporary Art in Los Angeles wanted it for a planned exhibition. The Jefferson School African American Heritage Center, which was granted Charlottesville’s controversial statue of Confederate general Robert E. Lee, has plans to melt the statue down and transform it. 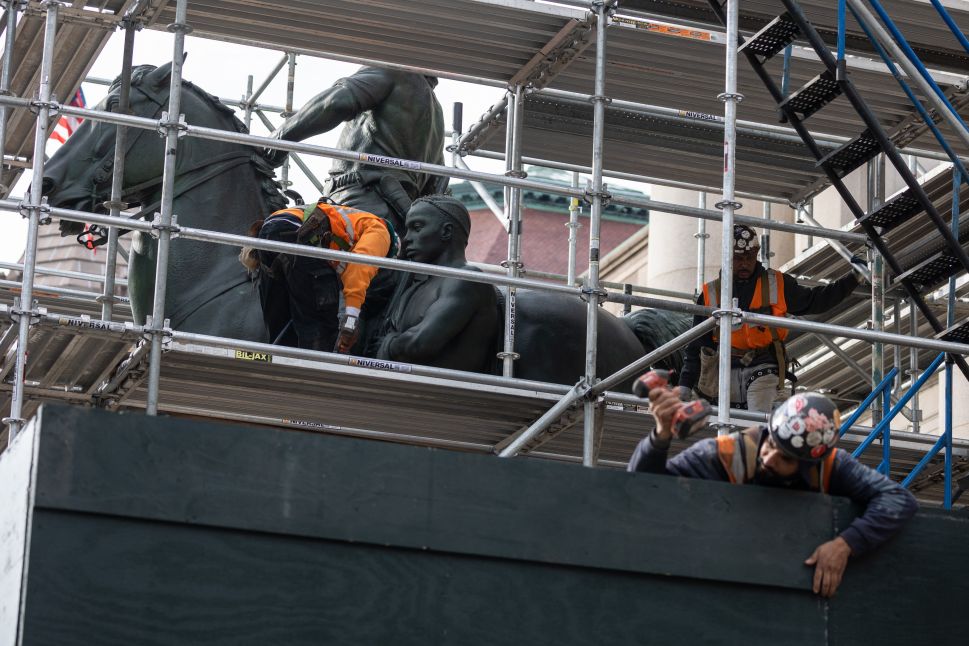