Paris Hilton is often called “the original influencer,” and maybe she is—she’s been spotting and creating buzz long enough that she trademarked the catchphrase “That’s Hot®” in 2004. But “the original influencer” is also part of a larger personal rebranding as she has shifted her focus (and herself) from the comic to the serious. She talks about the Paris we came to know in the 2000s as a character. “I’m not a dumb blonde,” Hilton told me when we spoke this week. “I’m just very good at pretending to be one.”

She’s referring to the Paris Hilton who could barely use a mop on The Simple Life, the five-season reality-TV series she starred in with Nicole Richie from 2003 to 2007. She is the Y2K answer to the socialite it girls that Andy Warhol dubbed “Superstars” in the ‘60s, donning big sunglasses and a pink Juicy Couture sweatsuit and carrying small designer bags with smaller dogs inside of them (most notably, a Chihuahua named Tinkerbell).

She also rose to fame at the same time as social media. The Simple Life premiered in December 2003. MySpace started four months earlier, in August 2003, and Mark Zuckerberg’s Facebook prototype, FaceMash, rolled on the Harvard campus in October. “When I started my career, there was no social media,” Hilton said. “I didn’t have a stylist. I didn’t have a publicist. I did this all on my own, just by being myself.”

Since the release of the This is Paris documentary on YouTube in 2020, Hilton has been reshaping her public image. The documentary, directed by Alexandra Dean, showed viewers that Hilton has been “in on the joke” about the character she portrayed at the start of her career.

More than that, though, Hilton made herself vulnerable by sharing the childhood trauma she endured while in various schools for troubled teens, notably the Provo Canyon School in Utah. Her parents sent her to these institutions, marketed as youth treatment centers, in an attempt to control her environment when she became involved in the New York City club scene as a teenager. What they did not know, however, was that these schools were far from rehabilitative: “At all four facilities I was sent to in my teens, I endured physical and psychological abuse by staff: I was choked, slapped across the face, spied on while showering and deprived of sleep,” Hilton wrote in an op-ed for The Washington Post. “I was called vulgar names and forced to take medication without a diagnosis. At one Utah facility, I was locked in solitary confinement in a room where the walls were covered in scratch marks and blood stains.”

Hilton has worked with Congressman Ro Khanna (D-Calif.) to push for a bill to regulate the troubled teen industry. She also has a podcasting deal with iHeart and helped develop a new podcast called “Trapped in Treatment,” which came out on Wednesday.

“The first season has to do all to do with Provo Canyon school,” she said. “And my mission is to get that place shut down and for people to be held accountable for their actions.”

Influencers, Then and Now

The world has been stunned by the way influencers—many of them teens or young adults—rose to fame on TikTok during the pandemic, building entire careers off of videos on the internet.

“It’s definitely the age of the creator right now,” Hilton said when I asked what she thinks about how things have changed since she started her career. She sees herself as having laid the foundation for a new generation.

“Well, being the original influencer, and always ahead of my time, I love seeing how something that I thought of many years ago is now actually like turned into a new genre of celebrity,” she said. “So I just think it’s amazing today that anyone with a phone and a talent has the chance to build a career and a brand out of it.”

TikTok, she said, is her favorite platform, and she especially loves watching Jason Derulo’s videos. “Jason Derulo literally is a genius on TikTok. I love watching what he does, like, the production value into every single one is just incredible. And I’m very impressed with his TikTok skills.”

In October, The Wall Street Journal reported that Hilton’s business empire was “getting a makeover” when she launched her company 11:11 Media with former Disney executive Bruce Gersh. 11:11—named for her favorite time of day— encompasses audio, TV, NFTs, and art. Hilton also hopes to get creators involved in the company and provide them with a trusted source in the media industry.

“I love that we’re just involved in so many things, she said. “And we’re going to start doing that for other people as well because I invented the blueprint for this and no one knows it better than me.”

One of Hilton’s talents is predicting what the next big trend will be and setting the stage for it herself. NFTs, for example, have exploded over the past year. Hilton was approached to do an NFT for charity for the Australia fires in 2019. Immediately, she knew she wanted to pursue them further.

“Right then and there, I knew that there was just something about this,” she said. “Not everyone could get into Art Basel or, you know, these amazing auction houses but with NFTs and this new world they’re able to.”

Since then, Hilton has released her own collection of NFTs including one entitled “Iconic Crypto Queen” that sold for over $1.1 million. She also has an upcoming drop in February on Origin Protocol called “Past Lives, New Beginnings” that partially focuses on her transformation and how she has rebuilt her life following the unfair media coverage she and other women received. The collection will also include a piece that features cut-outs of Paris’ favorite pictures of her and her new husband Carter Reum. Hilton and Reum also have a reality television series together on Peacock called Paris In Love.

“Now I’ve taken back my power and have become a businesswoman and a social advocate,” Hilton said. “And also the message of the truth will set you free and just how I’ve turned my pain into purpose and I’m making a difference.”

So how is Hilton able to foresee new trends and hop on them before anyone else? It might be that she’s an Aquarius and ahead of her time, she said. Or maybe it’s just a gift she has.

“I’ve always been a person who sees into the future,” she mused. “I’ll just think of something and then I’ll see it happen years later. Maybe I’m psychic.”

This story has been updated to reflect the final name of Paris Hilton’s NFT collection “Past Lives, New Beginnings.” 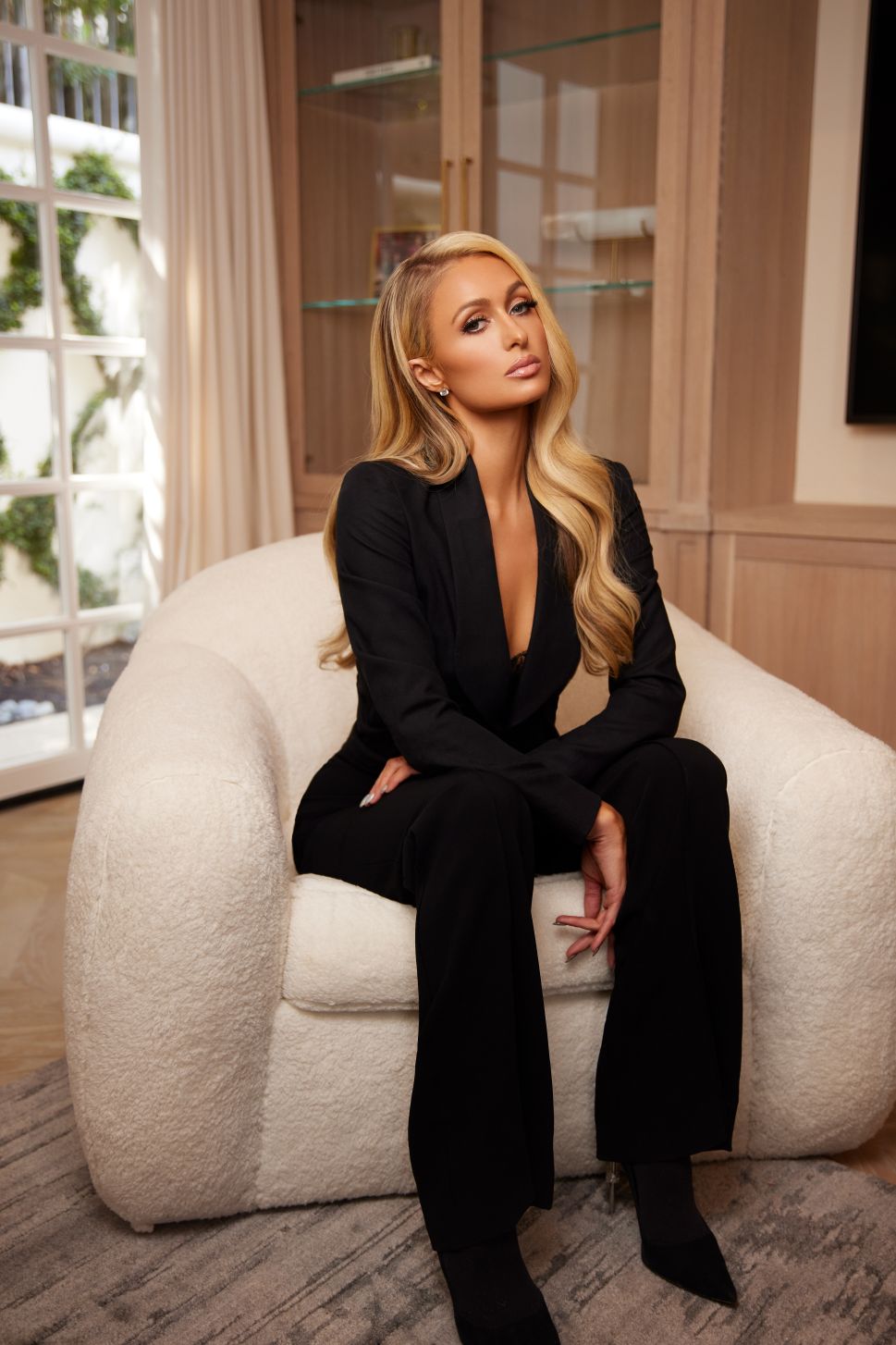