The Suicide Squad was a great course-correction for the franchise. By relying on James Gunn’s signature mix of irreverent humor, found family, surprising emotional depth, and a dash of daddy issues, the film opened the doors for new and exciting possibilities for the DC universe—and Peacemaker is the first fruit of that. The show is a greatest hits collection for Gunn, taking everything that worked with the film and compressing it into a small-screen package, one carried by an outstanding cast and supported by a pet eagle.

At the center of it all is John Cena as Christopher Smith, a.k.a. Peacemaker, who spent his time in The Suicide Squad either antagonizing his teammates or annihilating everyone who stood in his way. Revealed as an undercover operative for the Squad’s puppetmaster Amanda Waller (Viola Davis), Peacemaker snuffs out the crusading Rick Flag before taking a bullet himself and getting buried beneath a building. Yet here he is again, alive and kicking. Most of the first episode is spent making the audience care about Peacemaker as more than a patriotic douchebag/clown. The three-episode premiere largely succeeds at transforming him from heel to hero, flipping him from a bloodthirsty bigot who kills for peace to a clueless doofus struggling to be less of an asshole, with Cena bringing the charm and comedic chops that made him a scene-stealer in The Suicide Squad.

The character loses something in this switch from anti-hero to tragic hero, yet the show moves so fast you’ll be distracted by the next cool or funny bit before you start interrogating this flaw. Most of these distractions come in the form of banter from the supporting cast, which rules. The standout is Danielle Brooks as Leota Adebayo, a pacifist and a good-hearted person who’s never been in the field and serves as a perfect foil to Peacemaker, with Clemson Murn as Chukwudi Iwuji (the team leader with an evil past), Jennifer Holland as Emilia Harcourt (the combat expert who has to keep Peacemaker in line), and Steve Agee as John Economos (the tech guy in the van).

Then there’s Eagly, Peacemaker’s pet eagle, and an all-out fantastic take on the superhero sidekick. Peacemaker shares the love for the goofier side of comic books that defined Gunn’s Guardians of the Galaxy and The Suicide Squad, recognizing that comic-book stories can be silly and weird, but that doesn’t stop them from also being earnest and heartfelt. Nowhere is this more evident than in the opening credits sequence set to “Do Ya Wanna Taste It” by Norwegian glam metal band Wig Wam, where the entire cast comes out shaking it like Solid Gold dancers while looking completely stone-faced.

Still, a superhero show is nothing without compelling villains, and Peacemaker is building up some pretty nasty ones. There are the mysterious butterflies, who seem to be tin insects piloting mindless human bodies. Much of the first three episodes is spent keeping Peacemaker (and us) in the dark as to what the butterflies are up to. There’s also Vigilante (Freddie Stroma), a less Canadian Deadpool who wants to be pals with Peacemaker. He genuinely loves killing people for fun, whether they deserve it or not, so he both serves as a way to make Peacemaker a more attractive anti-hero and as a critique of the violence at the core of so many superhero stories.

Then there’s Peacemaker’s dad Auggie (Robert Patrick), who is used to explain Peacemaker’s violent tendencies as bad parenting, and who also may be the true villain of the show. We don’t see that much of him in the first three episodes, but Patrick makes a very strong impression as a man who is more than meets the eye. He’s a racist, sexist, xenophobe, but not a moron—he’s also apparently a genius with a pocket dimension in his house where he houses all the tech Peacemaker uses. And when he lands in prison in the second episode he is revealed to be the show’s take on White Dragon, a Neo-Nazi DC supervillain with connections to the Ku Klux Klan. Though the plot details are still relatively vague, the first three episodes of Peacemaker do a good job of translating the fun, irreverence, and character work of Gunn’s movies to the small screen. 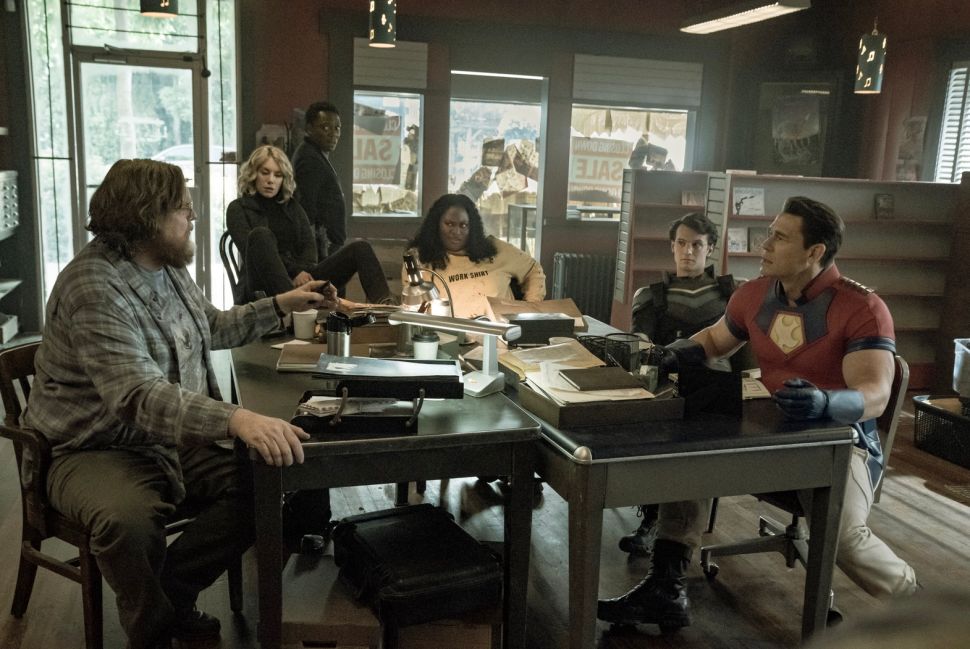