Fans starved for prima donna star-power got a welcome double-diva dose on Sunday when Renée Fleming and Sonya Yoncheva returned to perform in New York City, each for the first time after a long pandemic-enforced absence. But neither appeared in opera: Fleming headlined a matinee at Carnegie Hall with pianist Simone Dinnerstein and the Emerson String Quartet, while Yoncheva sang a rare evening solo recital at the Metropolitan Opera accompanied by Malcolm Martineau. Fervent ovations notwithstanding, neither concert showed the soprano to her best advantage.

Fleming, who turns 63 on Valentine’s Day, retains astonishing vocal freshness. Her instantly recognizable soprano sounds much the same as it did when I first heard her as La Folie in Rameau’s Platée.at the Brooklyn Academy of Music in 1988, three years before her debut at the Met where she’d perform for the next twenty-six years. Her prudence and care throughout the decades have preserved the special golden quality that has prompted her to be dubbed “The Beautiful Voice.”

I also first encountered Yoncheva performing baroque repertoire as a member of Le Jardin de Voix, Les Arts Florissants’s young artist program. At its 2007 Alice Tully Hall concert, the Bulgarian novice stood out for her lustrous soprano and engaging stage presence. After winning the prestigious Operalia competition three years later, she swiftly went on to debut at most of the world’s top opera houses.

Fleming’s long operatic career stands out for its remarkable consistency. Though some fans may have wished she’d been more daring in her repertoire choices, there have been few missteps beyond Eva in Die Meistersinger von Nürnberg—her sole venture into Wagnerian opera–and several controversial bel canto vehicles. On the other hand, Yoncheva has been criticized for taking on roles too heavy for her lyric soprano. When she agreed to Norma (after Anna Netrebko withdrew) and Tosca (substituting for Kristine Opolais), some soothsayers predicted the worst, yet those new assumptions were generally greeted with enthusiasm. Yet fears remain as she takes the plunge with La Gioconda later this year at La Scala.

But her daring choices have come at a cost. While over many busy years Fleming’s voice has changed little, Yoncheva’s once-bright soprano has darkened considerably over the past decade, and her high notes often spread alarmingly. However, she wisely chose material for Sunday’s recital that avoided putting pressure on the top.

Solo recitals at the Met began only in the early 1980s when then-Music Director James Levine, an accomplished accompanist, wanted to collaborate with artists he admired. Some of the Met’s biggest stars of the time–Leontyne Price, Renata Scotto, Marilyn Horne and Jessye Norman—appeared with Levine in recital. After two Luciano Pavarotti appearances in the mid-1990s, the company ended the tradition for a while until Peter Gelb revived it to showcase both established stars like Netrebko, Jonas Kaufmann and René Pape plus those younger artists he wanted to showcase. For Yoncheva, now positioned as one of the Met’s prime stars, Sunday’s recital was a next inevitable step.

While she has always focused on opera, Yoncheva has recently begun to appear more often in concert. Like Fleming, Kaufmann and Netrebko, she was featured in one of the Met’s pandemic-prompted “Met Stars Live in Concert” streams. She then toured extensively with a program derived from her recent CD “Rebirth,” a collection of 17th century vocal music, and also gave her first zarzuela concert in Madrid. Her busy schedule prompts me to be more forgiving than I might ordinarily be about her over-reliance on sheet music at the Met recital.

While there was nary a moment of tentativeness Sunday during her striking program of 19th century French and Italian songs, Yoncheva was less than ideally communicative as she frequently glanced toward her music stand. One had to wonder whether she had performed this music before. Happily, unlike many opera singers in recital, she didn’t dot her program with arias, though her most successful numbers were the most “operatic” songs.

Though its text was French, Donizetti’s “Depuis qu’une autre a su te plaire” could easily have served any of his despairing Italian bel canto heroines. And the soprano concluded her program not with an expected lighthearted showstopper but with Verdi’s “L’Esule,”  a grand four-part scena. Both ably displayed Yoncheva’s commanding dramatic prowess and touching gift for pathos. It’s no accident that her Met repertoire (with the exception of Tchaikovsky’s Iolanta) has consisted only of Verdi and Puccini operas whose heroines die onstage!

Except for those worrying spread high notes, her smoky, covered soprano sounded in prime estate as she offered songs that were predominantly sad or mournful. Clad in a tight black gown, she began with a haunting rendition of Duparc’s famous “L’Invitation au voyage” After beguiling selections by Viardot and Chausson, the French first half concluded with an infectiously rollicking “Les filles de Cadix,” the Delibes chestnut which left one wishing she’d let her hair down more.

When she returned after intermission in a blinding white satin gown with appliqued red roses, she had indeed literally let down her hair. Beginning with Puccini’s sweetly nostalgic “Sole e amore,” which he later repurposed for the third act of La Bohème, her Italian songs found the soprano in more affecting, expansive form. She took Tosti’s familiar “Ideale” so slowly and softly that it might have fallen apart but didn’t.

As successful as the scheduled selections had been, her operatic encores proved the evening’s highlights. The music stand was banished, and Yoncheva vividly came alive. After Mimi’s tenderly emotional “Donde lieta uscì,” Voncheva struggled to wrest a rose from the bouquet just handed her to assist with her slyly seductive Carmen “Habanera.” Rather than end there to raucous shouts of “brava!” she returned to melancholy with an exquisitely floated “Adieu notre petite table” from Massenet’s Manon. As the cheers of the rather sparse audience continued, she waved goodbye affectionately embracing Martineau, her superb pianist with whom she was clearly besotted.

Though Fleming’s presence was likely responsible for the packed Carnegie Hall, the afternoon’s ascetic program was not just the soprano’s show. She only entered well into the first half after Emerson had played a subtly wrenching Barber B-minor String Quartet, followed by Simone Dinnerstein’s bravura traversal of Mad Rush by Philip Glass who was in attendance.

Enthusiastic applause greeted Fleming, beaming in black and gold, when she appeared for five songs which she introduced as dealing with nature which had offered her important reassurance during the pandemic. A pair by Grieg (in German) and two by Fauré found Fleming in fine form though with somewhat reduced volume, as she gently communicated the comfort these past masters found in nature.

She pointed out that “Evening,” the concluding new song by Kevin Puts (whose presence she acknowledged after the set) and Dorianne Laux instead took a despairing view of the world’s future. Puts’s angular, demanding writing clearly challenged Fleming and led to a desperately splintered high note toward the end.

The concert’s main event arrived after intermission when another diva—actress Uma Thurman—joined the rest for the New York premiere of Penelope, André Previn’s puzzling final work. Left unfinished at his death in 2019, it was completed by David Fetherolf and premiered by these same forces at the Tanglewood Festival. While their commitment was admirable, it’s difficult to imagine much of a future for this wordy, unilluminating portrait of Penelope, Odysseus’s steadfast wife.

Following hard on the heels of the Met’s staging of Eurydice, Matthew Aucoin and Sarah Ruhl’s fanciful reimaging of Orpheus’s wife, Tom Stoppard’s lengthy libretto for Penelope, running seven-and-a-half single-spaced pages in the Carnegie Hall booklet, attempts no new view. The text, recounted by Penelope’s shade, offers a pretty straightforward narrative of her meeting Odysseus through their reunion after his return from the Trojan War. It’s puzzling that Stoppard simply offers the expected highlights of her story rather than offering new insights into Penelope’s twenty years of waiting.

More confounding is the division of the piece between a soprano and a speaker; the latter relates both a third-person account of events as well as many of Penelope’s words and thoughts. Thurman with her voluptuously intoned speech won handily over Fleming though she sounded vibrant abetted by discreet amplification. The soprano dutifully rendered Previn’s bland quasi-recitative but couldn’t bring her heroine to life. They were joined by Dinnerstein and the Emerson whose spare accompaniment was occasionally dotted with a piquant detail.

This January 23 couldn’t compete with a Sunday in 1986 when Lincoln Center hosted a legendary diva triple-header of back-to-back recitals by Kathleen Battle and Jessye Norman followed by a Montserrat Caballé/Marilyn Horne concert.  However, Fleming and Yoncheva did warm a chilly Omicron-exhausted Manhattan. Next, we eagerly await the divas’s imminent returns to the Met: Yoncheva at the end of next month in the company premiere of Verdi’s Don Carlos, Fleming this fall in Puts’s brand new adaptation of The Hours. 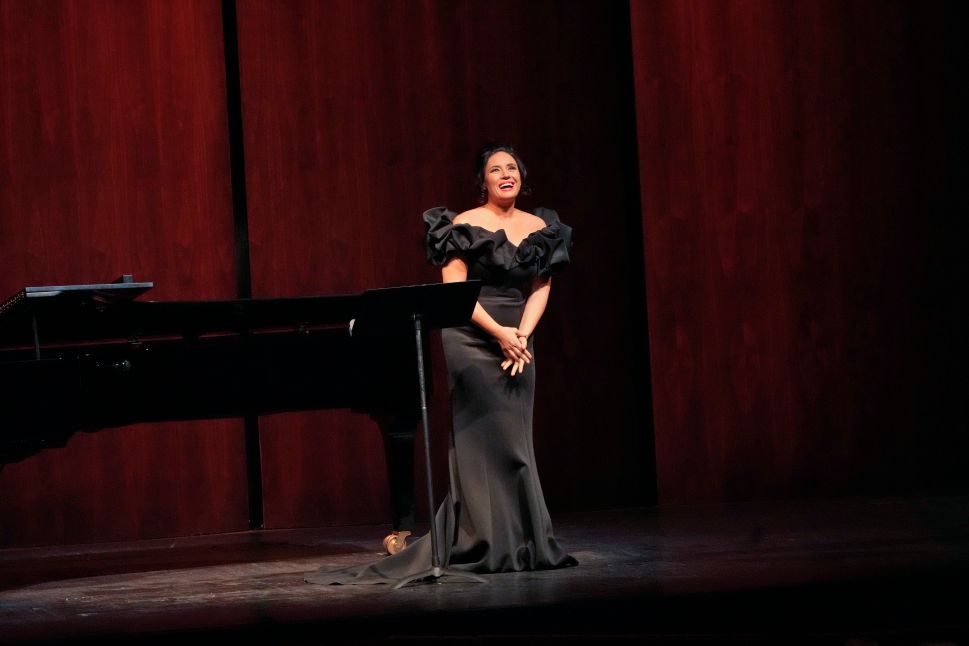