On Thursday, Sotheby’s New York scored a notable win with the sale price of Sandro Botticelli’s The Man of Sorrows, a gorgeous canvas completed around the year 1500 that renders Christ in deep, empathetic detail. Sotheby’s banged the gavel at $45.4 million, making Sorrows the second-highest-selling work of Renaissance art to sell at auction within the previous five years. Sotheby’s has done very well with Botticelli recently: in January of 2021, the auction house sold the master’s Portrait of a Young Man Holding a Roundel for $92.2 million; it was purchased by a Russian bidder. Renaissance work has also done quite well at other venues.

“Botticelli’s Man of Sorrows is one of the most potent, humbling works I have ever encountered,” Christopher Apostle, the Head of Sotheby’s Old Masters Painting Department, said in a statement. “Though seemingly religious, it’s a painting of enormous humanity –  a portrait of human suffering and spirituality that speaks a universal language. Today’s result is not only testament to its power and importance, but also to the timelessness of works painted some 500 years ago.”

In a 1978 catalogue of works by Sandro Botticelli, Botticelli scholar Ronald Lightbown characterized Man of Sorrows as one of the artist’s “workshop and school pictures.” Additionally, the title Botticelli gave his depiction of Jesus also illustrates just how unique the portrait is: rather than identify the figure by name or with a more neutral identifier, the painter chose to douse his subject in an air of romantic gloom.

In 2016, Rembrandt van Rijn’s 1634 painting Pendant Portraits of Maerten Soolmans and Oopjen Coppit sold for $195 million; also in 2016, Christie’s New York sold for Leonardo da Vinci’s Salvator Mundi $450.3 million. In the case of The Man of Sorrows, the sale is particularly notable because of how rarely works by Botticelli appear at auctions. Sorrows was last acquired at auction in 1963 for $28,000. 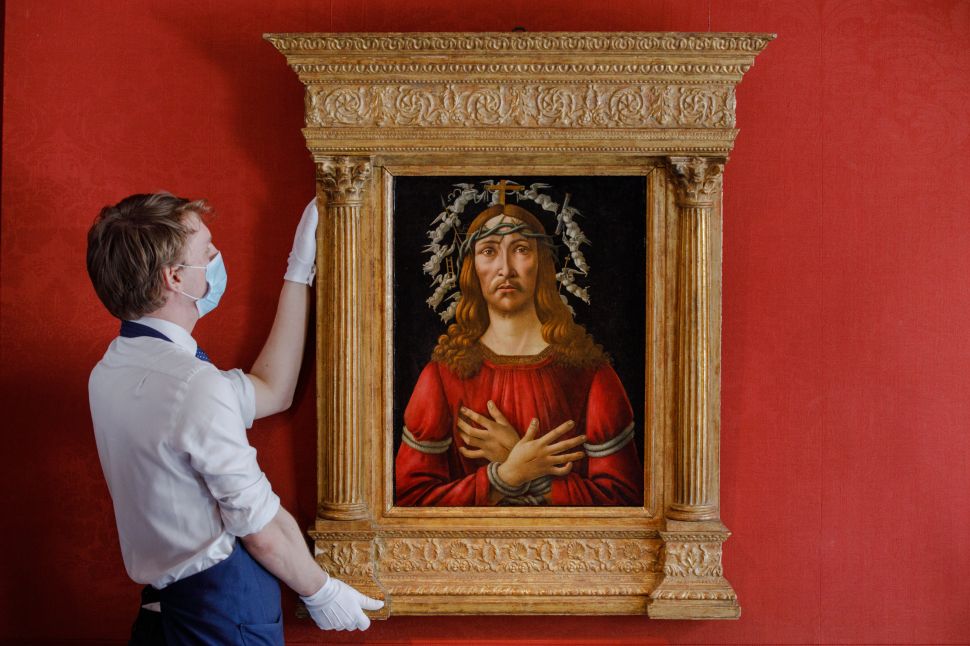