A high school reunion is stressful enough. But imagine it becomes the setting for the murder of  a former classmate. That’s the premise behind The Afterparty, a new comedy series from Phil Lord and Chris Miller, set to premiere on Apple TV+ on January 28. The eight-episode series, created and directed by Miller and executive produced by the pair, recounts the tale from eight different perspectives, each told in a unique genre. There’s the awkward rom-rom, told by Aniq (Sam Richardson), the musical, as revealed by Yasper (Ben Schwartz), and even the animated episode from the perspective of Zoë Chao’s Zoe. It’s a clever conceit that actually works.

“I’ve been a fan of murder mysteries my whole life,” explains Miller, speaking over Zoom with Lord. “I grew up reading Agatha Christie and watching Columbo and movies like Clue and Last of Sheila. And I had the idea to do a murder mystery in a Rashomon-style show where each of the suspects gets to tell their version of events and they’re wildly different.”

He adds, “But around that time we had some high school reunions coming up and we were thinking about reverting back to old dynamics. It all sort of folded in on itself and came together as a great place to set a murder.”

The series, which also stars Tiffany Haddish, Dave Franco, Ike Barinholtz and Ilana Glazer, allowed Lord and Miller to fully immerse themselves in each genre, some of which were familiar to the duo. Barinholtz’s action episode, for example, recalls the pair’s work on 21 Jump Street and its sequel. As the producers of Spider-Man: Into the Spider-Verse and October’s Spider-Man: Across the Spider-Verse (Part One)—both of which were also written by Lord—they knew how to tackle animation.

The Afterparty will debut with three episodes, followed by a weekly drop. That serialized release is intentional, with Lord and Miller hoping to generate theories and conversations as the story unfolds.

“Part of the fun of a murder mystery like this is trying to have people figure out whodunnit,” Miller notes. “Ideally, this is the kind of thing we can have a whole global community participating in and trying to solve the mystery. There’s also a bunch of bonus hidden clues and codes and cyphers hidden into the background of every episode. That’s for the real nerds to want to freeze frame some shots and solve some clues about whodunnit.”

Here Lord and Miller discuss creating the many genres of The Afterparty, the challenges of production during a pandemic and whether there will be more seasons to come.

Did you both attend your high school reunions?

Lord: Many of them! The neat thing about them is after really traumatizing re-entry into your high school, where everything is smaller but still terrifying like a weird funhouse, you get to know people in a different way. You learn there’s more to them than you initially thought. That maybe that jock who you thought was there to terrorize you turned out to be a person. The more you get to know all these folks, the less you imagine they could murder someone.

Miller: And that’s really what the show is about. You see people as two-dimensional caricatures, but if you get to see the world through their eyes a little bit you find out they’re more complex and human than you thought.

How did you determine which genre or style would be used for a particular character in their episode?

Miller: The characters came first and then we tried to push each style of telling their stories farther. It was about figuring out who fit what style of storytelling and then having them evolve so they fit better into those genres. It was a little bit of trial and error, although some of them were really obvious. Aniq’s story was always a rom-com at heart. Brett’s story was always full of action. Those fell into place relatively easily. It was a real chicken and egg-style of evolution.

Was it inevitable that one of the episodes would feature animation?

Lord: I mean, you know us. What’s the most difficult thing? It was interesting doing a series like this where there are so many production challenges, just with changing genres. The biggest one is creating an animation pipeline for just one episode. But it was worth it. It was a way to get to know Zoe in a way you wouldn’t have otherwise gotten to see it.

Miller: It was a really fun way to get to see someone’s internal world. That was what was so fun about the show—and crazy—is you’re making a different movie with every episode and the whole crew had to be very nimble. Each one had different cameras and lens and lighting and costumes, like slight costume variations, and unique challenges. A musical episode requires you to write a bunch of songs and choreograph dance numbers. That’s a whole different thing than making an action episode with a car chase and a fist fight. So each one was like, “This is the hard one. Oh wait, the other one is the really hard one. They’re all the hard one!”

Who wrote the songs for the musical episode?

Miller: They were co-written by the writers of the episode. Jack Dolgen, who was one of the executive producers on Crazy Ex-Girlfriend, who is a hilarious writer and musician. And Jon Lajoie, who wrote the songs for The Lego Movie 2, who is a rare genius of comedy and music. They did an amazing job—those songs are catchy and funny and they move the story forward, which is really hard to do.

Lord: More tribute, because I think it’s more interesting to try to hit the arc as much as you can.

Miller: We took a lot of care to make sure we weren’t spoofing anything specific because we didn’t want it to feel like a parody show. We wanted to feel like each of these genres is the way the person sees themself and see the world. It’s not, “Oh, look at this reference.” It’s a stylistic lens of how you see yourself and how you’re the hero of your own movie.

The cast is like a who’s who of comedy. Did you go into this with some of them in mind?

Miller: Yeah, we had people in mind. We were really lucky in that, with pretty much everyone, the first person that we went to [for a character], our dream person, was the person that we got. And so a bunch of the people we were writing with their voice in mind, and that was really helpful. We ended up getting an amazing group of people. And what’s special about them is not just that they’re really funny, because everybody knows how funny they are, but also the range that they all had. You’re asking these people to not just create a character, but do eight different shades of the same character that have different nuances. How do I do my character in a thriller versus a rom-com?

How long was the production?

Lord: How long is anything anymore? I just don’t know. I’ve lost all sense of time and space.

Miller: I think it was a little over four months of shooting. But it was really fun because it was in the middle of a pandemic and everybody had been cooped up in their houses and isolated, feeling lonely and kind of crazy. And then you get to this space where everyone is being tested every day and people feel safe. Everyone was really kind. There was a great camaraderie. The chemistry really showed up on the screen. You could show up to work and feel like, “I get to see people!” It was such a low bar to clear for people being happy, but really helped because everyone was in a good mood and happy to be there.

Phil, why have you lost all sense of time?

Lord: Because exactly one year ago we were on a set talking about The Afterparty and here we are again. We were like, “Wow, the [Covid] numbers are really big! It’s really scary! It’ll never be bigger than this!” And now here we are riding it all out again.

You sound in disbelief you actually were able to film a TV series during the pandemic.

Miller: Yeah. We were very preoccupied with everybody’s safety. Everybody worked really hard—the whole crew, Apple TV+ and our studio, Sony. We put the crew’s safety first and it made for a very safe-feeling set in the midst of all the craziness in Los Angeles at that moment. It was probably the safest place to be. And because people felt taken care of they were creative and funny and enjoyed themselves. You can feel it onscreen.

Were you working on this at the same time as Spider-Man: Across the Spider-Verse?

Lord: I was definitely writing Spider-Verse scenes from a night shoot of The Afterparty.

Miller: I have a photo of Phil when we were shooting the thriller [episode] on set. There’s fake rain and smoke machines making eerie fog, and Phil is sitting on a chair in a field with a bunch of smoke and rain around him and a laptop, with a mask on, writing some scene. It’s one of those things where we just never sleep and it’s not healthy and we’ll probably die at 50. But we’re having a great time doing it.

Lord: We will have led a full life.

Can viewers expect multiple seasons of The Afterparty?

Miller: We’d love to. Right now we’re just hoping people are excited and engaged about this as much as we are. We had so much fun making it and there are many other styles of storytelling we didn’t get a chance to do. So we’d love to, but it’s really a question of whether the world loves it and wants it as well. 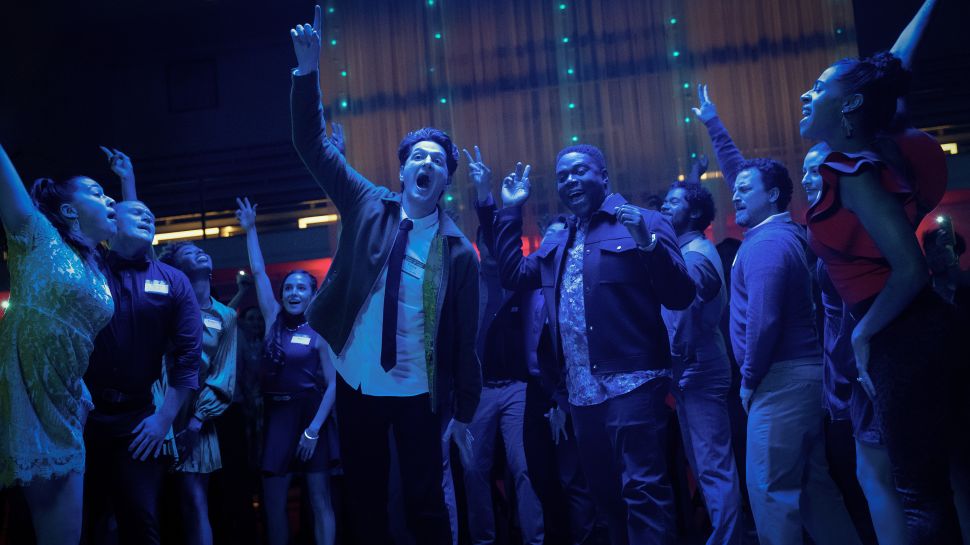