Last week, in my review of the premiere of The Book of Boba Fett, I expressed my disappointment that the series seemed stale from the start, a victim of its unavoidable similarity to its sister show, The Mandalorian. The first episode provided insufficient flash to compensate for its lack of substance, and little evidence that star Temuera Morrison could bring something new to Boba Fett that hadn’t already been repurposed for other Star Wars works. Happily, the second chapter, “The Tribes of Tatooine,” improves on the first by almost every measure, finding a groove for itself as an off-beat post-Western on an alien world.

Like the premiere, episode 2 splits its story across two time frames. In the “present day,” Fett (Morrison) and assassin Fennec Shand (Ming-Na Wen) return to the city of Mos Espa to investigate a recent attempt on their lives. Circling back to the same locations isn’t terribly exciting, but the return trip underscores something charming about the world of Boba Fett—it’s unabashedly silly. For every scene within this subplot that’s played as straight drama, there’s another that feels like a single-camera sitcom. It doesn’t all-the-way work because the gags aren’t all-the-way funny, but the irreverent tone is contextually appropriate. Boba Fett is a man who demands to be taken seriously and no one seems eager to accommodate him, not even the camera. Fett converses with some new challengers to the Tatooinian throne (including a popular comics character making his screen debut), but gets little respect and makes no progress on his quest.

Fourteen minutes in, we leave this story behind and pick up The Book of Boba Fett’s other temporality, which is where the series finally starts to demonstrate its potential. Here, we see Fett prove his value to the band of Tusken Raiders with whom he’s been traveling since his escape from the Sarlacc pit. “The Tribes of Tatooine” depicts the Tuskens in a more sympathetic light than previous Star Wars screen works, reframing them as the planet’s disenfranchised indigneonous people. After witnessing members of the tribe being casually slaughtered by cargo haulers, Fett resolves to help the Tuskens assert their claim over their ancestral lands. “An outsider teaching indigenous people to repel colonizers” is a shopworn story that’s also too often offensive, but the resonances are different when the outsider isn’t played by a white man. Your mileage may vary as to whether or not Boba Fett’s application of this trope is still problematic.

The flashback portion of “The Tribes of Tatooine” is a far more complete story than either of last week’s subplots, benefitting from a longer runtime and a tighter narrative focus. Individual members of the Tusken tribe, though still nameless, take on clearly defined roles, with the black-clad Tusken Warrior (stunt performer Joanna Bennett) standing out as the coolest silent badass on a show populated almost entirely by silent badasses. Like The Mandalorian, The Book of Boba Fett thrives during periods of prolonged wordlessness, in this case broken more often by Tusken sign language than by spoken dialogue. This understated approach is why the climactic train heist really pops, where both of last week’s fight scenes fell flat.

“The Tribes of Tatooine” is playfully weird in a way that Disney-era Star Wars tends not to be. It’s true that much of this episode is merely recycling elements that George Lucas cribbed from Dune way back in 1977, but it also throws in a few new and goofy elements, namely a lizard that crawls up Boba Fett’s nose and makes him hallucinate. It’s a surprising and refreshing reminder that Star Wars is a fantasy and that, despite decades of filling in gaps and tying together loose strands of mythology, not everything about this has to make sense. Moreover, Fett’s lizard trip represents a little bit of everything that works in the episode: it starts funny, grows more visually interesting, and comes to symbolize Fett’s bond with the Tuskens while hinting at deeper character motivations underneath. This bizarre gag leads the episode to a conclusion that’s entirely sincere.

The flashbacks in these first two chapters help establish Boba Fett as a new character, defined neither by his glorified cameos in the original trilogy nor by his childhood in Episode II and The Clone Wars. What the series has yet to do is bring any of the energy of that new character into the present day narrative in Mos Espa, which so far has been relatively dull. Five episodes remain, plenty of time for the crime drama portion of the series to pick up some momentum. If the storytellers can accomplish this, and if “The Tribes of Tatooine” is an accurate example of the series as a whole, then things are looking up for The Book of Boba Fett. 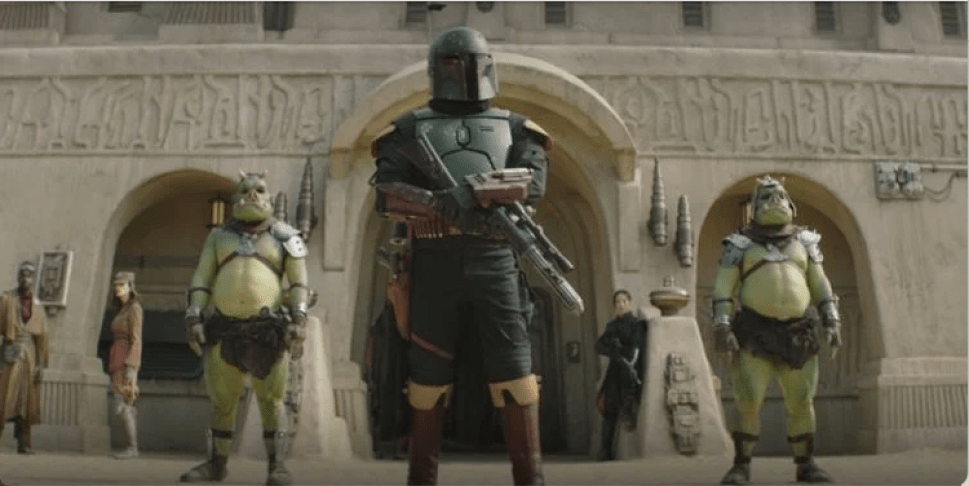