While the highly anticipated revival of The Music Man idles awaiting the recovery from COVID of its stars Hugh Jackman and Sutton Foster and other Broadway shows have closed either temporarily or permanently, the Metropolitan Opera defied Omicron to present its annual New Year’s Eve gala Friday night. If the crowd was sparser and less nattily dressed than in previous years, enthusiastically grateful applause greeted the superb cast and conductor after the premiere of the company’s new version of Verdi’s beloved classic Rigoletto. Before a celebratory shower of glittering confetti fell from the ceiling, the response was decidedly more tepid for the production team as yet once again director Bartlett Sher demonstrated little affinity for opera.

One of the more baffling features of Peter Gelb’s reign has been his propensity to invite again and again the same directors whose limp, unimaginative productions fail to challenge Met audiences. Rigoletto is Sher’s eighth project for the company, while this season also hosts Mary Zimmerman’s fifth and Sir David McVicar’s eleventh! Gelb has been understandably cautious given the aggressively negative reactions toward Luc Bondy’s brutal reimagining of Tosca and Willy Decker’s spare, contemporary La Traviata. But both have been swiftly replaced by more conservative productions by McVicar and Michael Mayer, respectively.

Mayer’s 2013 Rigoletto too fiercely divided audiences, many of whom derided its substitution of 60s Las Vegas for the 16th century Mantua setting of Verdi’s original. Its louche evocation of the Rat Pack milieu, complete with neon lights and a stripper pole, doomed it to being replaced after just 56 performances. Online commentators were also quick to condemn unseen the new Met attempt even before it premiered when it was announced that Sher’s version would be set in the Weimar Republic during the 1920s.

Yet any resemblance to the television series Babylon Berlin’s riveting depiction of a corrupt society on the verge of a cataclysm was nowhere to be found in the bland, confused Rigoletto that unfolded Friday night. Other than an opportunity for Catherine Zuber to design some smashingly stylish gown for the ladies, one searched in vain for the rationale behind Sher’s decision. Little suggested pre-Nazi Berlin; the opera could have been taking place anywhere.

Reports of the production’s initial performances several years ago at the Berlin Staatsoper took pains to mention that Michael Yeargan’s set lacked its intended turntable. But, boy, was it ever in evidence at the Met as the immense versatile structure spun round and round to dizzying excess. One of the evening’s most unnecessary moments illustrated Sher’s recurring tendency to use the turntable to direct the audience’s attention to the wrong thing! After Rigoletto’s daughter Gilda was kidnapped and brought to the lascivious Duke, the tenor who had just moments earlier showed his tender side in the aria “Parmi veder le lagrime” exalted that he could now have his way with his current crush. Poor Piotr Beczala had to step to the front of the stage and valiantly poured out both verses of his cabaletta, but no one was watching him as the set revolved to expose a desperate Gilda being restrained, then stripped by a pair of impassive matrons.

Minutes later, well before Quinn Kelsey finished pouring his heart out in his desperate plea “Cortegiani,”

Sher brought out the seduced Gilda, barefoot and wrapped in a white bedsheet, effectively both ruining the baritone’s big moment and diminishing the soprano’s usually wrenching entrance. Despite this outrageous miscalculation, the audience still responded with a roar of appreciation for the baritone’s urgent rendition. While the evening was filled with many head-scratching choices by Sher, he and Kelsey did collaborate on a revelatory interpretation of the title character, one in which the tender, wounded father came to the fore.

Since there was no longer a Renaissance court needing a jester, one never knew how Sher’s Rigoletto functioned in an early 20th century Weimar world. Yet in the first act, Kelsey still vividly evoked the character’s double nature, turning on and off the caustic remarks expected of him while clearly resenting his outlier status among the elites. More than other Rigolettos I’ve seen, Kelsey’s was completely broken by Monterone’s terrifying curse. Never before have I so clearly understood Rigoletto’s drive for vengeance against the Duke. Rosa Feola’s uncommonly forthright Gilda made it abundantly clear that she would never renounce her seducer, so a rash, protective father must dispose of him in order to “save” his daughter.

Kelsey, who first appeared in Rigoletto at the Met as Monterone ten years ago, has sung the title role nearly 100 times including new productions in Oslo, Paris and Zurich, prior to bringing his acclaimed interpretation to Lincoln Center Friday night. He follows in a long line of Americans who have shone in Rigoletto at the Met during the 20th century from Lawrence Tibbett, Leonard Warren and Robert Merrill to Cornell MacNeil and Sherrill Milnes.

Kelsey in his turn brings a uniquely beautiful, high baritone to the Verdi repertoire. As in previous Met performances as Germont, di Luna and Amonasro, he favors nuance over brute force which draws you in to sympathize with even the most misguided characters. Rather than his show-stopping “Cortegiani,” for me the high points of Kelsey’s portrayal were the heartfelt duets with Gilda, especially his breathtakingly quiet reprise of “Ah, veglia, o donna” in the first act.

Of course, he had a most worthy partner in Feola, whose softly radiant yet penetrating soprano was consistently bewitching in what has become a signature role for her. If the occasional extreme high note didn’t speak quite as easily as she might have wished, she and Kelsey always sang with admirable legato and remarkable care for Verdi’s dynamics. Feola was also an unusually spirited and determined Gilda who made us believe in her desperately misguided mission to save the Duke, despite Sher’s absurdly incomprehensible staging of her murder.

Beczala, who turned 55 last week, remains a creditable Duke, the role of his Met debut in 2006. If his bright, impassioned tenor did not ring out as consistently had it had at the premiere of the Mayer Las Vegas production nine years ago, one easily understood the sheltered Gilda’s all-consuming infatuation. Beczala is such an appealing performer that one felt he and Sher had too much ignored the brutal, unfeeling side of the Duke: he was far too likable.

Andrea Mastroni returned to Sparafucile, his inky black bass reveling in his insidious villainy. Armenian mezzo Varduhi Abrahamyan debuted as his seductive sister and partner-in-crime Maddalena. If she didn’t pour out the decibels as vigorously as others before her have, she held her own in an interestingly slow rendition of the famed quartet.

Eve Gigliotti’s brutally opportunistic Giovanna too often distracted from Gilda, while Craig Colclough thundered mightily as Monterone while being aggressively manhandled. Among the conspirators Jeongcheol Cha’s virile Marullo stood out.

Conductor Daniele Rustioni’s debut five years ago leading a revival of Aïda passed without much notice but his magnificent Rigoletto gave notice that he is one of today’s best Verdi conductors. He drew glorious, incisive playing from the Met’s fine orchestra and the men’s chorus performed with tremendous vigor and bite. One heard incredible orchestral detail throughout but never at the expense of a propulsive forward motion. I hope that he will return to work this magic on more Verdi, but this weekend he’ll tackle Mozart in a revival of Le Nozze di Figaro in a weak-tea production by Sir Richard Eyre, another Gelb favorite,

While Rigoletto newcomers likely won’t be confused or put off by Sher’s wanly straightforward production, they will also not gain any new insights into Verdi’s compelling and tragic tale of paternal affection gone awry. After the performance, my masked group of five opera veterans collectively shook their heads after yet another off-kilter Sher Met premiere. While his pleasant debut Il Barbiere di Siviglia has succeeded as a durable favorite, the other seven are safe, timid and/or just downright dull. Don’t Met audiences deserve better? 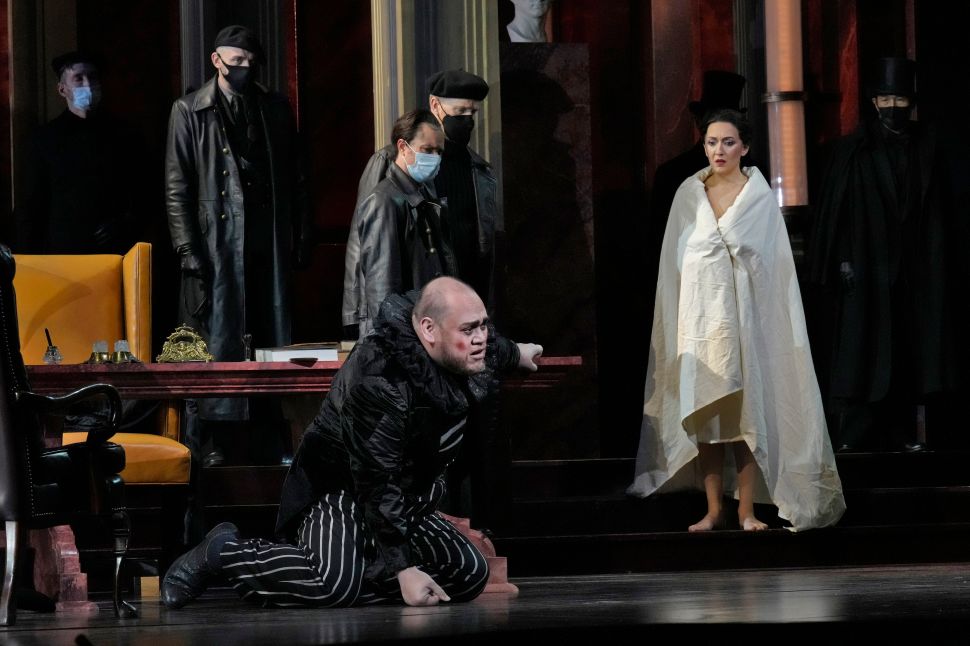