This week’s Righteous Gemstones offers good laughs but better drama, as a large family gathering leads to a proportional explosion of petty conflicts. On the comedic side, it’s a showcase for the talents of Edi Patterson, who in addition to her role as Judy Gemstone also wrote this episode with Danny McBride and John Carcieri. Dramatically, we’re once again treated to a strong performance from John Goodman as Eli, who sinks deeper into brooding and despair. And, straddling both sides of the emotional spectrum, we have the welcome return of Walton Goggins as Baby Billy Freeman, who bookends the episode with twin acts of cowardice.

The episode opens with a flashback to 1993, where Baby Billy offers to buy his young son Harmon (Jeremy T. Thomas) any Christmas gift he chooses from their local mall. After Harmon picks out a cat from a pet shop, Baby Billy embraces his son, tells him he loves him, and walks out of his life. As he did last season, Goggins portrays Baby Billy with remarkable sensitivity. His love for his son comes across as entirely real, and for a moment it’s possible to sympathize with this deadbeat dad who feels as if staying with his son would only mean failing the child. But that sympathy is short-lived. The final shots of the teaser are from Harmon’s point of view as he watches his father disappear into a crowd of shoppers, a painful memory in the making.

After the opening titles we return to the present day, where Judy reluctantly accompanies her husband BJ (Tim Baltz) to greet her in-laws. BJ’s parents and sister KJ (Lily Sullivan) are in town to celebrate BJ’s baptism, but Judy finds them boring and suspicious because A) they’re agnostic secular humanists, and B) Judy cannot recognize a healthy family dynamic when she sees one. Judy believes that BJ’s baptism should mark his true initiation into the Gemstone family, after which he shouldn’t need his old family anymore. In case her feelings aren’t clear, she sings an original song during the ceremony itself with lyrics that spell them out.

All of the Gemstone kids are emotionally stunted by their upbringing, but Judy seems to have gotten the worst of it, and it’s easy to trace how. Jesse and Kelvin (Adam Devine) are just as spoiled, but they’ve both been entrusted with responsibility in the Gemstones’ church. No one has ever expected anything from Judy, who is both the middle child and the only daughter in a rigidly patriarchal subculture. Judy’s schoolyard perspective on sexuality is almost understandable considering she likely received zero formal sexual education whatsoever and learned most of what she knows secondhand from her older brother. Unlike Jesse or Kelvin, she has no friends, no entourage, and apparently no relationships with other women. Above all, Judy is a narcissist, unwilling to share. She’s intensely possessive of BJ (which BJ usually enjoys), but his family represents a threat to her ownership, so she does everything she can to convince him that they’re a toxic influence to be removed.

Meanwhile, Jesse (Danny McBride) and Amber (Cassidy Freeman) meet up with their new friends Lyle (Eric André) and Lindy Lissons (Jessica Lowe) and break the news that they don’t have the $10 million to invest in their timeshare community. Unsurprisingly, their friendship is conditional on the business venture and the Lissons storm off. Jesse is left dejected and angry at his father for not backing his real estate deal. At the same time, Eli cancels Kelvin’s scheduled trip to Israel with his God Squad, forcing him to attend BJ’s baptism and reception. As an added indignity, the God Squad gets bounced at the door and has to wait outside the party while Keefe (Tony Cavalero) smuggles them low-carb snacks from the buffet. Both boys feel that their agency is under attack and arrive at the baptism primed to explode.

Eli is in no mood for their nonsense. He sees the baptism as the sham it is, something that Judy muscled BJ into in a bid to win him family acceptance—as well as a belated, expensive wedding reception, since the pair eloped at Disney World. But if Eli’s accustomed to being everyone’s piggy bank, his emotional low is a different story. His reunion with his old friend Junior went soured instantly; his attempts at dating have led to humiliation and hostility from his children. After what he sees as a lifetime of good works, must he spend his golden years alone and unloved? Must everyone see him as an opportunity to be exploited? When Jesse, Kelvin, and Judy (well, technically BJ) each publicly disrespect him at the baptism, Eli finally snaps. Kelvin picks the fight, but Eli finishes it in the same fashion that he punished people back in his Maniac Kid days, by breaking his thumbs.

Baby Billy, on the other hand, has come to the baptism claiming that his life is on the upswing. His boasts of newfound financial success may not be trustworthy, but his young wife Tiffany (Valyn Hall) is definitely pregnant and due to give birth any minute. Baby Billy seems keen to accept this blessing into his life, but a conversation with Eli reminds him of his past failings as a father and he wanders off alone to sulk. When the party has ended, Tiffany is left waiting for him to return with the snacks she asked for, but we know he isn’t coming back. He’s already miles away, halfway home to North Carolina. Ever Eli’s opposite, Baby Billy is offered a second chance at love and family and runs from it.

Still looking to spite Eli, Jesse and Amber steal his party bus back to the compound, but their journey home is halted by a mechanical problem. Jesse and Amber await repairs at a nearby gas station and are shocked when a group of motorcyclists arrive at the station, brandish automatic weapons, and unload four clips of ammunition into their bus. Both survive the attack, but we’re left to wonder who’s behind this well-coordinated assassination attempt. The obvious answer is Junior, who’s been set up as the season’s antagonist and who declared last week that if Eli wouldn’t be his friend, he’d be his enemy. Junior himself does not appear in this episode, instead sending one of his wrestlers (James Preston Rogers) to demand an apology from Eli. But, truth be told, jumping immediately from smashing a tomato on Eli’s windshield to ordering an expensive professional hit seems a bit far-fetched. Might someone else be responsible? Say, someone who stands to gain $10 million if Jesse inherits the family fortune?

We’ll have to wait at least a few weeks to find out, as the next episode is entitled “Interlude II,” evidently a palette-cleansing flashback between the first and second halves of the season. 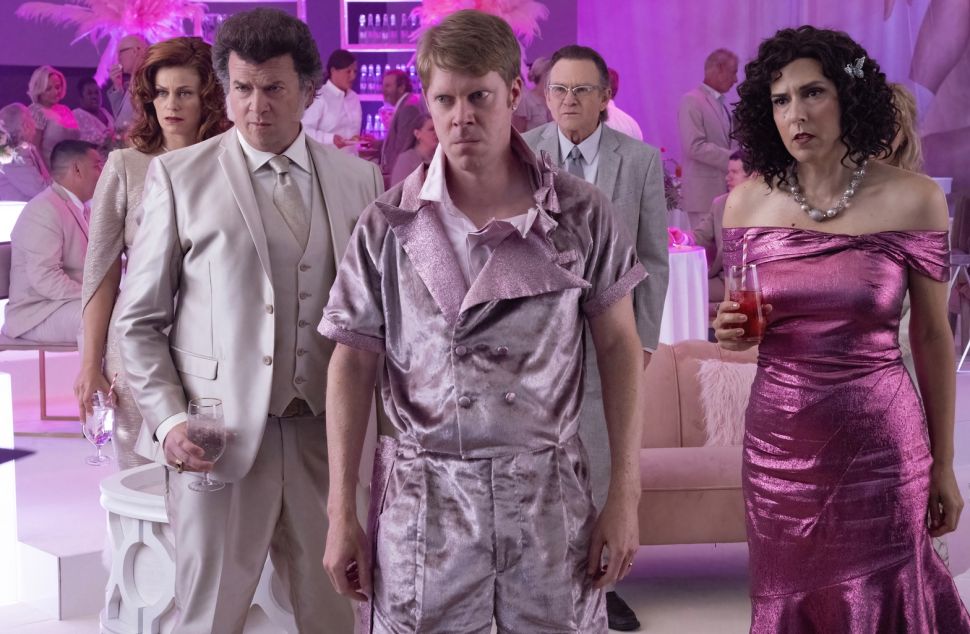