At long last, it’s the return of The Righteous Gemstones, Danny McBride’s HBO comedy about a filthy rich, deeply stupid family of televangelists. It’s been 27 months since they’ve last graced our screens, but with the January 9th release of the new season’s first two episodes, it’s clear the Gemstones have lost none of their luster. This year promises a deeper exploration of the dynamic between the “New Generation” of the family (read: fully adult children) and their stubborn patriarch Eli (John Goodman), and of Eli himself, all while maintaining the level of bawdy cartoon buffoonery that’s made the series a bizarro-world version of Succession.

The season premiere, “I Speak in the Tongues of Men and Angels,” begins with a prologue set in Memphis, 1968. After a ferocious and victorious battle, a young wrestler called the Maniac Kid (Jake Kelley) receives an offer to make some easy money breaking thumbs for a local loan shark. When Maniac finishes brutalizing his first mark he rides his motorcycle home past a hand-painted mailbox bearing the name “Gemstone.” That’s right — the Maniac Kid is none other than a young Eli Gemstone.

In season one Eli was more of an authority figure than anything else, a foil for his foolish children, Jesse (Danny McBride), Judy (Edi Patterson), and Kelvin (Adam Devine), who compete for his favor. This season promises to explore Eli more thoroughly, as a figure from his past resurfaces to take advantage of his loneliness and encourage his violent impulses. Eric Roberts is impeccably cast as Junior, Eli’s partner during his days as a debt collector. He’s remained in the wrestling business his whole life and thus embodies a very particular brand of slimy suavé. Junior is to Eli as Baby Billy Freeman (Walton Goggins) was to his late wife, Aimee-Leigh: someone he chooses to trust despite his obvious untrustworthiness.

Meanwhile, having resolved their differences from last season, Gemstone heir apparent Jesse and his wife Amber (Cassidy Freeman) have their hearts set on leveling up as a power couple. They pursue a friendship and business partnership with Texan televangelists Lyle and Lindy Lissons (Eric André and Jessica Lowe), “the Gemstones of the West,” but have difficulty keeping up, since Jesse remains financially dependent on Eli and Lyle has already wrestled the pursestrings away from his own father. Now that he has a peer to measure himself against (aside from his siblings), Jesse has a new fire in his belly to assert himself as the future of the family business, a position that he feels no closer to in his mid-40s than he did in his youth. Jesse still has the emotional maturity of a 12-year-old, but working alongside his wife rather than behind her back frames him as a bit more of a grown-up. McBride and Freeman have terrific comedic chemistry, and seeing their characters in sync charges that dynamic. Their peace does come at a cost, however, as the lack of home drama leaves their eldest son Gideon (Skyler Gisondo) with very little to do in these first two episodes.

Likewise, Jesse’s younger siblings Judy and Kelvin are, so far, only utilized for petty banter and the odd gag. The verbal sparring between the Gemstone kids is reliably funny, but Judy and Kelvin’s own subplots for the season are still brewing. Judy has established an on-screen role at the church and married her milquetoast fiancé BJ (Tim Baltz), but neither of them is getting any more respect from the family than before. Kelvin has become the leader of a cult-like crew of bodybuilders called the God Squad, which is certain to strain his relationship with his obsessively devoted follower Keefe (Tony Cavalero). As a trio, though, McBride, Patterson, and Devine are still dynamite whether they’re working together or playing 2-on-1 (in any permutation) in front of their father.

The second episode, “After I Leave, Savage Wolves Will Come,” gives the siblings a common enemy in Thaniel Block (Jason Schwartzman), a journalist who’s already crushed one family associate with a sex scandal (reminiscent of the fall of Jerry Falwell, Jr.) and now has his sights set on the Gemstones. Any series in which the protagonists are awful people requires someone truly nasty as an antagonist, and Schwartzman’s smarmy Brooklyn journalist is so effortlessly loathsome that even I, a smarmy Brooklyn journalist, instantly craved his downfall. Unfortunately, Gemstones disposes of this threat with surprising haste, denying me the joy of hating Thaniel for the full length of this season. His departure is not without narrative purpose, but I’d have liked to have spent more time with this character. 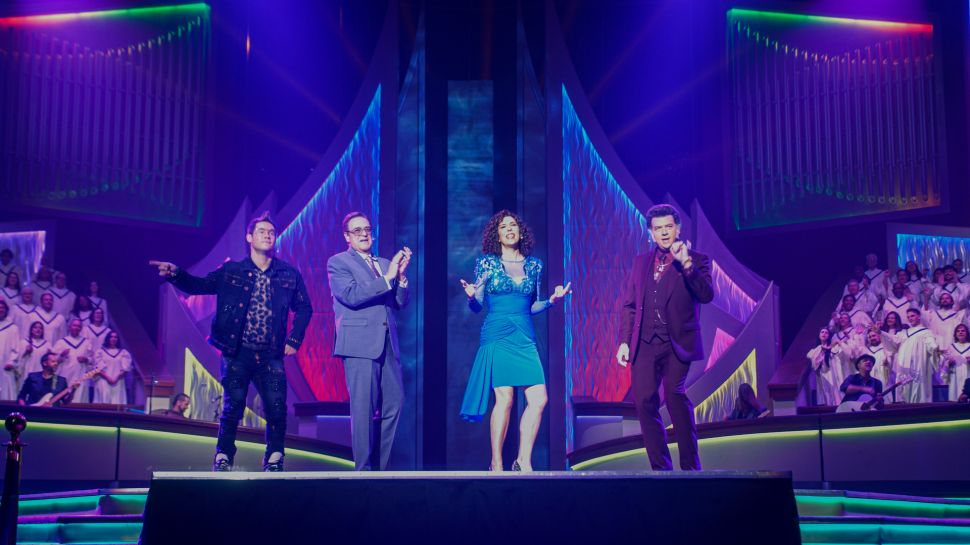