Almost anyone can claim an allegiance with or affinity for graffiti art, but much fewer people have immersed themselves within the fly-by-night cowboy lifestyle that produces some of the medium’s most enduring figures. In New York, towering practitioners like 1970’s icon Zephyr helped created new languages altogether: Zephyr pioneered the fright train graffiti movement, inspiring legions of others while simultaneously guaranteeing that much of his original creations would be forever lost. The trickle-down effects of Kenny Scharf‘s cartoon-like aesthetic can be seen all over the city today. Since-deceased graffiti artist SAME pulled off a truly legendary stunt in 2014: he strolled into a Jeff Koons exhibit at the Whitney and tagged “PPPRiceless” on the wall.

Photographer and fellow graffiti artist Blake Kunin has dedicated himself to capturing figures such as these, and the ephemeral, beautiful works of art they produce, for years. The result is his first book, Bark At The Moon, a photographic compilation of 289 pages of antics and artistic vandalism. Kunin’s first exhibition, at Leo Fitzpatrick’s gallery Public Access in Chinatown, will also take place later in spring.

Observer: You yourself have done a lot of graffiti writing, right?

Blake Kunin: Right. Graffiti really set everything in motion for me to find photography. If it wasn’t for graffiti, I wouldn’t have ever picked up a camera or really ever started pursuing creative stuff. [The book] is a pretty up-to-date, well-rounded book about the current state of graffiti. It’s not a history book. I didn’t come out with the intention to go through the history of graffiti; it’s more so about the lifestyle, and environment, and type of situations that most graffiti writers can identify with. And it’s not just specific to the people in the book. So, that was my intention, you know, because there’s a lot of people that do graffiti that I don’t know, but that live the same type of lifestyle and will definitely be able to identify with the people in the book.

Graffiti truly fits within the anarchist spirit that New Yorkers embody that I feel like was most heightened, or most unbound, during the 70s. Right? When the trains weren’t working, and everyone was just angry.

Yeah, I definitely would say the 70s and the 80s were probably the blueprint of graffiti today. And not much has changed. That’s the craziness. It is all influenced from that time. Just environments changed — there’s more police, and everything is under surveillance. That’s the biggest change. But it’s definitely about freedom, you know? Graffiti writers are the ultimate freedom. They definitely just want to live in their own world and communicate with each other.

To that end, could you tell me about a couple different artists featured in the book?

Oh, totally. For instance, there’s MQ and he’s been writing graffiti for close to 40 years. And then you have someone on the other side of the spectrum, Tober, who’s much younger, in his 20s. But graffiti can bring those two completely different generations of people together. And you don’t really have to have anything else in common except for graffiti to be able to relate, and connect, and empower each other. That is the biggest thing that I think is really cool with graffiti is you can go anywhere in the U.S. or a lot of places around the world and you don’t necessarily need to be able to talk to people to connect with this.

Do you think that not just graffiti itself, but graffiti culture and the graffiti bomber mindset, has bled into other industries?

Oh, definitely. For instance, the first time I ever saw Arc’teryx before I saw it mainstream was within the graffiti community. And I feel like any sort of subculture, fashion and all that stuff, is born in the street, you know? And that’s the first place you’re gonna see before you see it on a billboard, or on the runway. And I definitely think it’s true with graffiti.

What do you make of certain graffiti artists — I won’t name names — making it into the highest stratosphere of the art market?

I mean, I think everyone can do what they want, you know? And I’m not against it. I just think that in the same token, you’ve got to respect the people that don’t do that. And those that made it a conscious effort to shy away from any sort of opportunity like that and not pursue it and really just stay true to the culture. And really, that’s why I pursued making this book as much as I did is because most of the people in the book don’t participate in that type of stuff. And I feel like their contribution in the graffiti culture should be celebrated.

And just documented, period. Because you see tons of examples in the city of, like, 5Pointz being scrubbed down. There’s just so much ephemeral art and graffiti art that as soon as it’s there, it’s gone. So exalting it in the art world is one thing and a really important element. But there’s also just making sure it’s preserved in any way at all, right?

100 percent. I give the same amount of credit to the guy that’s had a tag on the same street corner of a city for ten or 15 years and maintained something like that. To me, that is just as powerful as someone accomplishing something in art at the highest level.

Do you have a favorite piece or work of enduring graffiti art in New York City?

It was in SOHO a few years ago. They pressure-washed the wall and it unveiled a DONDI tag that was probably from the 80s. And to me, that’s another cool thing about graffiti is it’s like a time capsule to other generations. The other amazing thing I saw a few years ago on was on The Bowery. They pressure washed another wall and unveiled a CURSE villain from 2001, and CURSE passed away in 2008, so stuff like that sticks out to me. 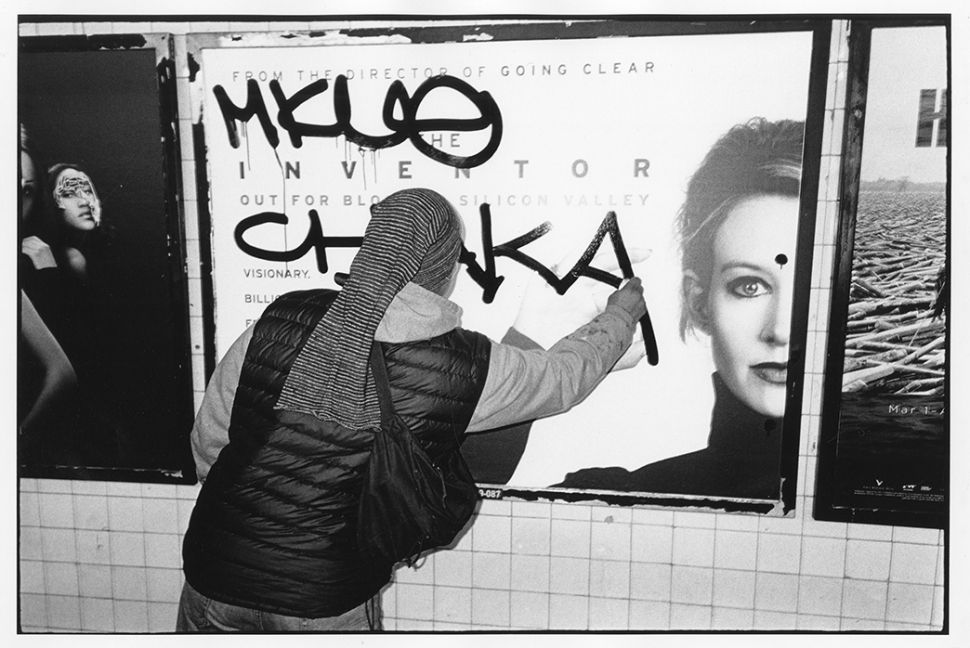