In the past two years, Elon Musk’s neuroscience startup Neuralink has taken the obscure concept of brain-computer interface (BCI) technology mainstream with a series of highly publicized demonstrations of how its Link chip implant worked in animal brains. This year, the company hopes to test the same device in humans and is actively hiring a team to persuade the Food and Drug Administration to allow it.

“[The] first Neuralink product will enable someone with paralysis to use a smartphone with their mind faster than someone using thumbs,” Musk said in a tweet last year.

FDA approval or not, Neuralink won’t be the first company to implant a BCI in a human brain for therapeutic purposes. In fact, the neuroscience community has been researching applications like what Musk described for more than a decade.

“The BCI research community is extremely vibrant. They are looking at everything from [enabling people to] walk again, see again, hear again, and even feel again. Anything you can think of, they are researching it,” said Marcus Gerhardt, CEO of Blackrock Neurotech, a Salt Lake City-based medical tech company whose BCI has been implanted in 31 patients in various clinical studies worldwide, more than any company in the world.

Gerhardt, an entrepreneur and investor by training, cofounded Blackrock in 2008 along with Florian Solzbacher, a professor of electrical and computer engineering at the University of Utah with a mission to accelerate the commercialization of BCI technologies.

Currently there is no FDA-approved invasive BCI device on the market. In April, the regulator approved a non-invasive head wearable developed Washington University-backed Neurolutions, the first device authorized under the FDA’s BCI category. On the invasive side, only two companies have received the FDA’s permission to test BCI implants in humans: Blackrock and New York-based Synchron.

Blackrock’s BCI is essentially a microelectrode array placed in specific areas of the brain to decode and transmit neural signals to an external device, such as a robotic arm or a wheelchair, through a computer. In short, through a BCI, thoughts can be used to control machinery.

Currently, the only way to get a BCI implant in the U.S. is to participate in an FDA-authorized study. The FDA current definition of BCI restricts them to restoring motor or sensory functions in patients with paralysis or amputation. That definition is being expanded rapidly, however, to include applications aimed at restoring communicative abilities, like talking and writing, recovering memory loss, and even treating mental illness.

In an interview last month, Gerhardt discussed the most cutting-edge applications the BCI community is working on and how their enormous potential could benefit a large population of neurological disorder patients who don’t have any remedy options.

Restoring limb functions, such as moving a wheelchair, controlling a mouse cursor or using a prosthetic device, remains a primary use case of BCI. The earliest human study dates back to 2006 when Matt Nagle, a 26-year-old patientfrom Massachusetts paralyzed from the neck down due to a stabbing injury, had a 96-electrode array implanted on the surface of his brain over the motor cortex, a region that controlled his dominant left hand and arm.

The implant was connected to an external computer through a small wireless connector box placed on the top of his skull. The computer was then trained to recognize Nagle’s thought patterns and associate them with various movements he was trying to perform. The system, developed by a company called Cyberkinetics, allowed him to control a computer cursor with his mind, using it to click buttons, send emails and even draw a simple figure on a screen.

Cyberkinetics was acquired by Blackrock in 2009. And the implant demostrated in Nagle later became part of the company’s MoveAgain BCI platform. In November 2021, MoveAgain received the FDA’s Breakthrough Device designation, an endorsement of its potential to treat patients suffering central nervous system disorders, spinal cord injuries and other severe motor disabilities.

Restoring the Sense of Touch

BCIs like MoveAgain, Gerhardt said, can greatly benefit patients with tetraplegia, a severe case of paralysis that causes loss of both sensation and control of all four limbs and torso. But restoring physical movement isn’t enough. “If you ask tetraplegic patients, many would tell you that regaining the sense of touch is more important than being able to move again,” Gerhardt said.

In 2016, 10 years after Matt Nagle controlled a cursor with his mind, a 28-year-old paralysis patient named Nathan Copeland felt a touch on his prosthetic arm for the first time since losing all sensations in arms and fingers after a car accident in 2004, during a study led by researchers at the University of Pittsburgh using Blackrock’s BCI system.

The BCI was groundbreaking because it not only transmitted neural signals from Copeland’s brain to his robotic arm, but then transmitted sensory signals from the arm back to his brain. This bi-directional system is more similar to how our limbs naturally interact with the environment around us, and allows patients to perform more fluid motions.

In September 2021, Blackrock announced an investment in a clinical study led by the University of Minnesota for a novel auditory nerve implant aimed to serve a potential market of roughly 30 million hearing impaired Americans for whom cochlear implants are not a treatment option due to anatomical variations in their cochlea, a spiral-shaped bone in the inner ear that plays a key role in the sense of hearing.

Unlike traditional cochlear devices, this BCI implants the electrode array directly into the auditory nerve. “Not only does this process potentially allow for significant hearing improvements in a whole new set of patients, but it could improve activation of the auditory pathway to the brain, which in turn could further help people hear in noisy environments such as live music,” Gerhardt said.

On the other end of essential communication capabilities, Blackrock’s research partners are looking to tackle talking and writing functions in paralysis patients.

A study partnered with the University of California, San Francisco is testing a thought-to-text BCI that can decode neuron activities in the speech areas of the brain directly into words, which are then sent and displayed on a computer.

A separate project partnered with Duke University is studying whether patients could imagine vocalizing words. In that case, thoughts are translated by an algorithm and sent to a device that would produce a voice for them.

Gerhardt said these implants could enormously benefit ALS patients with “locked-in” syndrome, who have lost the ability to communicate but “still have full-speed brain power.”

Decoding a person’s thoughts into complicated commands such as writing and talking is an idea long contemplated by the neuroscience community. The progress achieved by the teams at UC San Francisco and Duke is largely thanks to recent breakthroughs in speech-to-code algorithms.

The speech-to-code machine learning algorithm, developed at Stanford University, boasts a maximum speed of 90 characters a minute—which is 10 times faster than conventional approaches, such as devices that track eye movements, Gerhardt said—and an accuracy rate of 94 percent. It increases to 99 percent when the text is autocorrected by a computer.

“Our dream is to enable a tetraplegic patient to control things around them, maybe communicate and write an email and, simultaneously—this is tough—accept an incoming call from a friend,” Gerhardt said. “And just imagine, when a love one gives them a hug before leaving the room, they would actually feel it.”

By any measure, BCI still has a long way toward regulatory and commercial acceptance, and the technology is not perfect. However, Gerhardt doesn’t believe it should slow down the effort to commercialize what’s already been built.

“Maybe we are only working on the ‘next-best’ technology, but let’s not have that stand in the way of providing an impact today,” he said. “Nearly one in six of the world’s population suffer from neurological disorders. That’s a heath care cost that far outweighs cardio and cancer combined.

“I strongly believe that our reservation about brain implants will reduce over time,” he added. “It’s already happening for cardiology. Forty years ago, if you asked someone if it’s ok to put something in your heart, most people would say you are out of your mind. Today, a pacemaker is a prothetic subject. I think we will see a similar development with brain implants as they become more prevalent.” 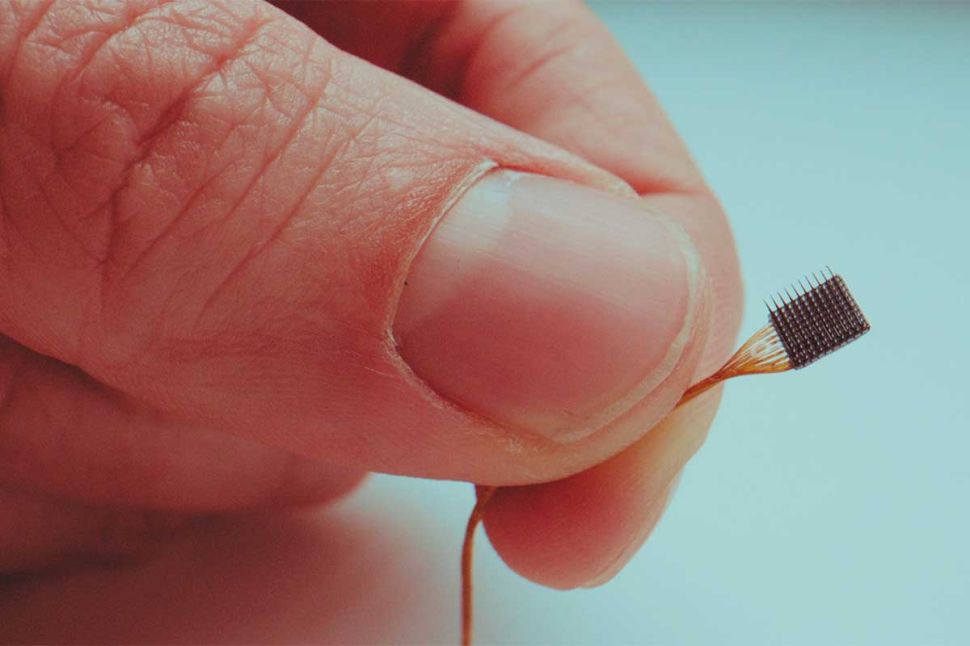