Dog may be man’s best friend, but Dog, a snooze about a boring 1500-mile road trip shared by a dog and a man—both war-ravaged, brain-damaged soldiers—should have stayed in the kennel.

In his first film in five years, Channing Tatum plays Jackson Briggs, an Army Ranger in the Pacific Northwest wounded in Afghanistan, who is anxious to get back into uniform to prove his competency.  Maybe, says his commanding officer, if he consents to drive a fellow Ranger, a huge Belgian Malinois named Lulu, from Oregon to Arizona in Briggs’ 1984 Ford Bronco in time for the funeral of the hero dog’s late trainer.  It’s hate at first sight, but Briggs and Lulu have one thing in common: they both suffer from post-traumatic stress disorder and all of the many personality conflicts that serious medical condition entails.  This superficial setup results in all manner of forced, artificial and often insultingly farcical adventures that never really jell. Lulu threatens to savagely attack anyone who touches her ears, which makes her a threat to every canine-friendly child who wants to pet her. Barking incessantly to wreak havoc on Briggs every time he tries to get laid, the only thing that calms Lulu down is to share his bathtub.  In the lobby of a plush San Francisco hotel, she  tears into a Muslim wearing a native caftan that triggers memories of the Taliban. The film is structured to mark time between incidents, but the incidents are frustratingly without much interest.  I found nothing appealing about the dog (actually, three dogs play Lulu) and although Channing Tatum poses often enough in his underwear to prove he didn’t cancel his gym membership after Magic Mike, his range as an actor has not expanded as fast as the size of his gluteus maximus.

He’s a likeable if limited actor, but you wouldn’t know it from the weak, truncated screenplay by Reid Carolin, who also co-directed with Tatum.  Talking almost exclusively to the dog, his performance comes off like a one-man monologue.  To add some diversity, he wears a girl’s kimono and sings a high falsetto chorus of “The Lion Sleeps Tonight”.  Before they reach their destination, the Ford breaks down and they have to travel the rest of the way through miles of desert on foot, which makes the movie even duller. By the end, when Briggs, who hates dogs, is supposed to deliver Lulu to the Army and leave her behind, the movie has become so predictable that adoption is inevitable. Briggs is a clueless tsunami of cliches, and Lulu isn’t much to write home about, either.  It’s not that they do anything wrong.  It’s more like they don’t do anything at all.  The movie is well-intentioned (ranger dogs are now a decorated branch of the military, and there really was a Lulu, to which the movie is dedicated).  But Dog is so unfocused, so devoid of narrative thrust and emotional subtext that concentration inevitably falters and I found myself inadvertently slumbering in the arms of Morpheus.  Come to think of it, that’s a better name for a big, tough dog the size of a tank than Lulu. 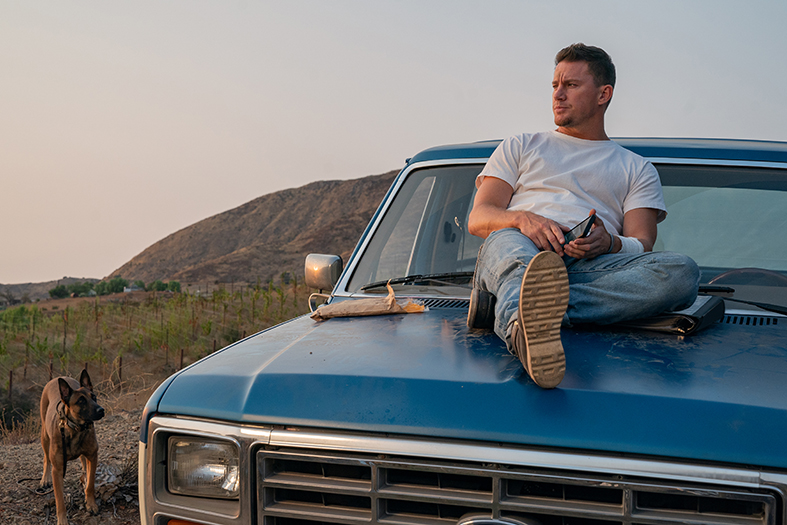