What does one paint in the face of death? Etel Adnan painted a single black line. She painted it again and again.

In the last year of her life, the late artist created a series of minimalist, black and white paintings that captured her daily concerns during the pandemic. These artworks were on display at Galerie Lelong, at both their Paris and New York locations (Jan 6 – Feb 19). In the wake of Adnan’s passing in November, the series seemed imbued with qualities of the vast and eternal even as it depicts simple objects such as a fruit bowl or a vase of flowers.

Moving away from the saturated color palettes for which she is most known, these works strip life back down to its plain and naked forms. A pure white background. A black line followed by another. That is all there is. There is a reverence for silence here. In contrast to the vivid saturation of her earlier works, the guiding theme of these compositions seems to be emptiness, without texture or even shadow.

They recall how Adnan, in her final works of writing, was repeatedly gripped by the idea of death. These paintings appear framed by a similar confrontation with mortality. The vast absence of the pandemic years seems to reverberate through the white space within these drawings. Walking through the New York gallery on the first day after a big snow, the silence within the paintings seemed echoed by the silent white walls of the gallery which echoed the silent, snow-covered city outside. In the midst of so much silence, should one disappear? Perhaps to live is to take part in this continual brushing against blankness.

There is a poetic perseverance to Adnan’s sparseness. Against a large blank backdrop, these still lifes leave their individual marks, scant and clear. The series, titled “Discovery of Immediacy,” suggests that what it means to live can perhaps become most apparent when juxtaposed against the quietude of death.

“I need to simplify my thinking to come to the roots of the olive trees,” Adnan wrote in her last published book Shifting the Silence (2020).  Accordingly, her subjects appear to have shaken off the need for ornamentations of color or context or detail. Even the many plants in her paintings, mostly grasses, stems, leaves and flowers, have been reduced to scraggly and unadorned brushstrokes. They have all arrived back at their most fundamental forms.

“Almost all of my beliefs have deserted me,” Adnan wrote in Shifting.

Her paintings suggest that within this desertion, Adnan found not despair but clarity. The abandonment of past convictions allowed her to finally “make room for some silence.” Now finally, there is air. There is emptiness. There is space, within which is freedom. On vast blank canvases, Adnan’s brushstrokes seem unafraid to stray and wander. They go where they please, boldly and with determination. They stand firm, even as nothingness fills in the world between them.

“Life is daily, death is eternal” Adnan writes. In these drawings, we have the little daily occupations of a bottle or bowl, maybe a meal, a scattered arrangement of fruits, a cup, a glass, a few leaves, the edge of a field. These are the details of existence. Their skeleton shapes are careless and imperfect. Meanwhile, the infinitude of heaven or time waits behind them. It is this contrast which defines this work, a juxtaposition of everything and nothing, on the knife’s edge between life and what comes after. They are personal and minor at the same time as they are full of a fierce determination, each brushstroke casual yet strong. They are still lifes in the face of death.

Adnan described time in her final as going “One step at a time. One hour goes by after another.” Life proceeds line by line. Experience has taken on a simple quality in these paintings. It has been reduced to its basic truths. Not part of some larger narrative, but directly in front of the artist. Here is something to be eaten. Something to be looked at. Something to be held. These things proceed one after another like dominos, the effect of them falling together being the enormity of a life.

What is a line if not a way to take a single step forward? In that sense, painted lines on a canvas might be thought of as the same sort of thing as written lines on a page. In her book, Adnan repeatedly described the world as a line — the horizon, the light, the ocean, all flat and extending. Perhaps these are the scenes that become the lines of her drawings. Perhaps at some point they become the lines of her writing as well.

“… why am I writing these lines which are not bringing much to the world?” Adnan asked. “It’s one of the things that people do, that’s all.” 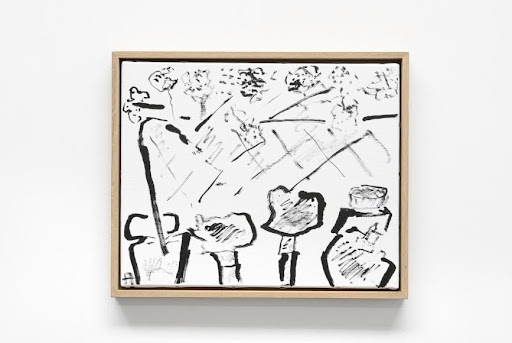