Real-time mapping services developed by tech giants like Google and Apple are intended as navigation apps for travelers. But during the Russia-Ukraine war that erupted last week, they have become potential tools for tracking military movements and civilians seeking shelter.

Google confirmed on Sunday that it has temporarily shut down Google Maps’ live traffic and its “Area Busyness” features in Ukraine to protect local communities from becoming targets of Russian invaders. These features collect real-time location data from Android smartphones to show where traffic is being delayed and which businesses and restaurants are busy.

Google said the decision was made after consulting with Ukrainian authorities, Reuters reported. Google has disabled foreign access to these features in Ukraine although live traffic information remains available to drivers using Google Maps’ turn-by-turn navigation features in the area, the company said.

Google Maps’ live traffic data was believed to have indicated Russia’s invasion of Ukraine before the news broke. On Thursday, Jeffrey Lewis, a professor at the Middlebury Institute of International Studies, noticed an unusual “traffic jam” at 3:15 a.m.—way too early for rush hour—in Russia’s Belgorod city, near the Ukraine border. The day before, Lewis, who specializes in arm control and nonproliferation, obtained a satellite image showing what appeared to be a Russian armored unit forming up near Belgorod. The traffic jam on Google Maps had him convinced that it was.

According @googlemaps, there is a "traffic jam" at 3:15 in the morning on the road from Belgorod, Russia to the Ukrainian border. It starts *exactly* where we saw a Russian formation of armor and IFV/APCs show up yesterday.
Someone's on the move. pic.twitter.com/BYyc5YZsWL

Lewis later tweeted the traffic jam was more likely data from the Android phones of civilians getting stuck at roadblocks while military vehicles passed. If the data had come from Russian soldiers’ smartphones, the map would have shown clear traffic because the troops were moving.

But his point stands. “It’s maybe less cool if the Russians were able to do something similar to, you know, spotting an offensive from Ukranians,” Lewis told Vice Motherboard last week.

About 80 percent of mobile device users in Ukraine use Android, while less than 20 percent use iOS, according to the web traffic analysis site StatCounter.

It’s not the first time real-time mapping services inadvertently reveal sensitive information in war zones. In 2017, a heatmap developed by the fitness tracking app Strava showing where its users were exercising accidentally exposed the location of several U.S. military bases in the Middle East. (Strava suggested military users opt out of the heatmap feature.) 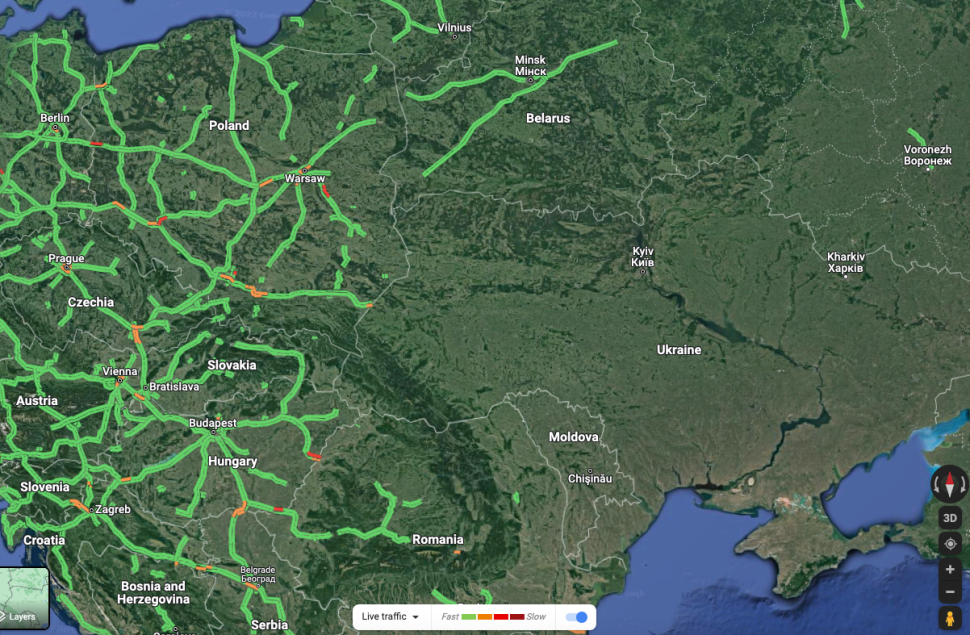