some of my favorite quotes from ‘The Atlas Six’ 🖤 (I adore this book, go read it besties) #booktok #theatlassix #bookquotes #bookish

When sales for The Atlas Six started going up in May 2021, author Olivie Blake had just given birth to her son. She was in the hospital and her husband had pointed out the spike to her. She didn’t know why sales had shot up until a Tumblr user messaged her saying the book had gone viral on TikTok.

“It was a huge surprise to me to see that all of this was going on and I had almost no awareness of it, except for the numbers just went crazy,” Blake told Observer.

On TikTok, users made videos describing the characters of The Atlas Six, convincing others to read the book and depicting its aesthetic, with the tag #theatlassix now at over 17 million views. Blake had self-published The Atlas Six because she felt that it wouldn’t be a good fit for traditional publishing (choosing instead to officially publish other material under her real name, Alexene Farol Follmuth), but the novel is now set for release through Tor Books in March and is going to be adapted into a TV series through Amazon.

The Atlas Six is one of the many books that have gone viral on BookTok, the corner of TikTok dedicated to reading. Other books include Madeline Miller’s The Song of Achilles, Leigh Bardugo’s Six of Crows, Adam Silvera’s They Both Die at the End, E. Lockhart’s We Were Liars, Casey McQuiston’s Red, White & Royal Blue, Taylor Jenkins Reid’s The Seven Husbands of Evelyn Hugo and Colleen Hoover’s It Ends With Us. The tag #BookTok has over 36 billion views on the app, and is now a full-fledged community with a real impact on publishing. Even Barnes and Noble has displays for books that got popular on the app.

“I think it’s really just been an evolution,” Libby McGuire, senior vice president and publisher at Atria Publishing, said to Observer. “We’ve always had these influencers that put books into readers’ hands and now TikTok has created an exponential growth way of doing that. It’s wonderful and really rewarding for publishers to see that readers are falling in love with our books and sharing it on this platform that can get it to so many people.”

Atria published It Ends With Us, which started gaining more attention on TikTok in November 2020. The book had initially sold 21,000 copies at outlets tracked by NPD BookScan in a month after its release in 2016, according to Publishers Weekly. In the summer of 2021, the book was selling on average about 17,000 copies every week. The book has now sold more than a million copies and the tag #itendswithus has 368 million views on TikTok.

Book sales in general picked up in the past year, according to NPD BookScan, with print book sales increasing by 9 percent to 825.7 million – the highest it’s been since BookScan started tracking book sales in 2004. TikTok downloads increased during the pandemic, but so did interest in reading, a hobby many people picked up again after other activities were put on pause in quarantine.

Elizabeth Black, a 23-year old student, was one of those people who used the time at home to read more. After seeing BookTok videos on her For You Page, she decided to post her own. Her account @bumblebeezus now has 341,000 followers and over 12 million likes. “It’s a good, safe space to enjoy storytelling in general,” she told Observer. “When you get into BookTok, I think it’s just fun. You see all of these jokes and you’re learning that there are other people with similar interests that you can talk to. If you’re feeling a little bit alone or you don’t have other readers in your life, it’s a great place to go.”

BookTok is allowing users to build a community around reading, rather than just reading on their own. Part of the communal experience is tied to the fact that books with a strong emotional hook are often the ones that go viral. “Once we cry reacting to a book, we need other people to do it with us,” Black said.

Fantasy book series tend to do well on BookTok, and there’s a big audience for Young Adult books as well. There’s lately been a surge in romance books, including erotica. BookTok has also led to the popularization of micro genres like dark academia and tropes like enemies to lovers. This ability to distill a book down to these specific themes or structures reflects the algorithm’s ability to pinpoint specific tastes.

BookTok in particular is highlighting books that don’t get as much attention, whether it’s older books like The Song of Achilles, which came out in 2011, books marketed to teenagers or book genres – like romance –  that are popular among women. The BookTok community spans a range of age groups and identities, but young women, specifically teenagers and young adults in their twenties, make up a large portion of it. While many of the books that do go viral on TikTok are by white authors – again, many of them women – and often center on white characters, some TikTokers are seeking out more diverse books.

“I think that it’s amazing that people are looking for something that traditional publishing isn’t providing them and I just hope that wave continues, or that people become accustomed to reading books by authors of color,” Blake said.

Kimberly Nwokorie, a 21-year old student who runs a TikTok account under the handle @kimmybookss with 97,000 followers and 5 million likes, has been trying to bring attention to books that represent all kinds of readers, ever since she started posting. “Seeing the lack of diversity at the time – all the books that were being promoted were very Caucasian books – I was like, ‘Let’s change that narrative,” she tells Observer.

She connected to Tracy Deonn’s Legendborn, a TikTok-popular YA fantasy book. “I believe that book changed the trajectory of my life,” she said. Nwokorie identified with Bree Matthews, the protagonist of the book. “I was like, ‘She’s just like me!’ I just felt so represented and shown in that character. I’m still so obsessed with that book,” Nwokorie said.

For 26-year old student and bookseller Kouthar Hagi who runs the @cultofbooks TikTok account (50,000 followers) with her friend Carla Archenoul, being on BookTok has made clear to her the lack of diversity in the books she read growing up, and is helping her to fill in those gaps. “I think it’s helped diversify and it’s also helped make people feel like, ‘Oh, I can be in a book, I can be a main character,’ which has been lacking a lot in previous years,” she said.

She shares those books with others, so that they can read about experiences that reflect the BookTok community as a whole. “I don’t think I’ve met a group of people that are exactly the same. It is an array of people. It’s amazing,” she said of BookTok.

That diversity is transferring over into the publishing industry as publishers and brands are increasingly partnering with BookTokers. Nwokorie makes TikToks on Penguin Random House’s account (@penguinrandomhouse) and Penguin Books UK reached out to Hagi and Archenoul about their Lit in Color program (@litincolour), which is helping to get more books by authors of color onto school curriculums. “I think it’s been a godsend, the way that a lot of us have been able to acquire a lot more experiences within that field,” Hagi said.

It also means that TikTokers who may not have formal experience in publishing are now getting opportunities to work there. “All of these readers that don’t necessarily need a degree or any specialty within the literary world, now have connections with companies,” Black said. ‘Even just having a random Barnes and Noble location follow me makes my entire week.”

BookTok is helping readers and publishers look outside of the confines of traditional publishing – whether it’s people who work in publishing, authors or books. Even self-published books like The Atlas Six and Elena Armas’ The Spanish Love Deception can go viral. The tag #thespanishlovedeception has close to 60 million views on TikTok and the book been picked up by Atria Books. It’s paving the way for more people to break into the publishing industry.

“I hope that as power gets transferred back into the hands of readers that readers use that power responsibly,” Blake said. “If all that BookTok does is continue the tastes of the institutional gatekeepers, then that’s not that great. If what BookTok does is to promote the works of authors who might not otherwise succeed because there isn’t space for them in the industry, then that’s amazing, then that’s innovation.” 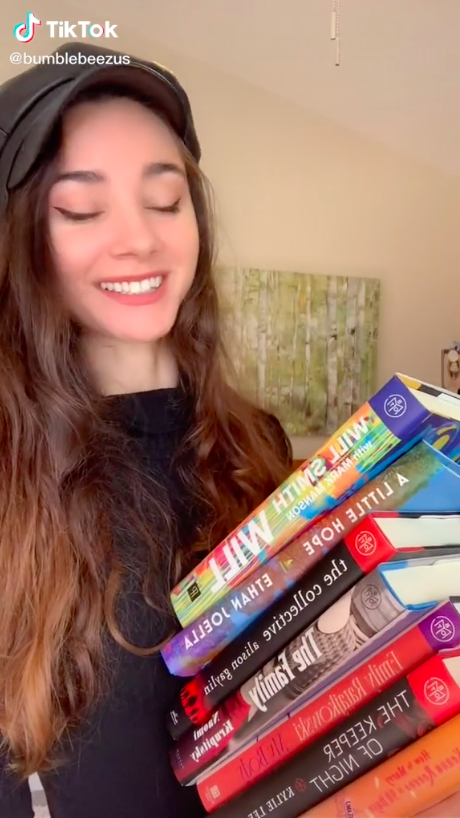