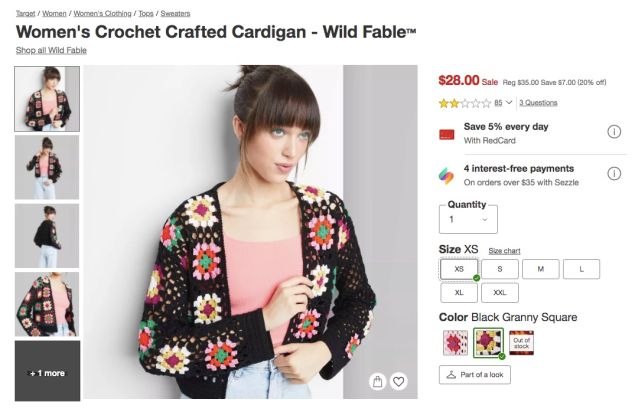 Right now on TikTok, there’s a discussion happening in the crochet and crafters community. A cardigan is currently being sold at target that’s described as crocheted, and its original price point was $35, although it’s been marked down to $28. To the untrained eye, that seems like a fairly normal price point for Target’s market, but for those who work in textiles, it’s drastically low.

The specific issue with this sweater is that crochet used cannot be replicated by machine. The pattern, commonly referred to as “Granny Squares,” can only be done by hand. Crafters are angry, and they’re asking people to not perpetuate the cycle of underpaying laborers for hours of intensive work. One tiktokker even calculated how much the sweater would cost to break even on labor if the piece were made by hand.

#greenscreen Also that 25min? Ive been crocheting for almost 5 years now. I have speed on my side. #target #DIYwithBlock #DuetDoWet #28DaysOfEucerin #crochet #knitting #fyp @target

Initially, there was debate on if the item was manufactured by human or machine, but in the Q&A section for the item, Target staff support confirmed it was made by hand.

When consulted on the item, Yvonne Martinez, a textile artist, said “You don’t see more mass produced crocheted garments. The pieces do appear to be crocheted from what I can see, and the looping technique is too hard for a machine to replicate. I’d assume someone would be making the centers in one color and passing them to the next person with the next color, and so on.” When asked how long it would take her to make a single granny square herself, Martinez guessed around 30 minutes. There are more than 20 squares on a single cardigan—meaning more than 10 hours of hand work.

Rhianna Dean, a textile engineer, suggested that the squares may have been commissioned on a piece-per basis, with workers getting paid per the amount they were able to complete. That would likely create better working conditions, but Dean was swift to point out that the per-piece method can be a way for factories to get out of paying an hourly wage. “Companies will supply materials and find contract workers that will do this at home and pay them 5 cents a piece,” she said. “This is speculative for the case of this sweater, but I’ve seen it before.”

Thank you @mattrose1312 for letting me use the data you figured out. Fast fashion has a bigger cost.

Dean also noted that there’s a human element in all textile production. “Industrial looms or knitting machines still have to be threaded and set up by hand,” she said. “Just setting up knitting machines is extremely labor intensive and takes a lot of skill. I think people don’t think about this but machines and factories are not just ‘push a button’ automatic.” When asked if these sort of industrial looms are ubiquitous across all fast fashion brands, Dean said yes.

“Even companies that produce in the US could be sourcing fabric and threads made from sweat-shop labor somewhere down the line,” she said. “It’s a huge supply chain. Unless a company has full control over their supply chain, there is almost definitely some unethical labor down the line.”

When asked, Martinez said if she had made a sweater like this herself, she’d set the price for $200. Dean put the price at $300. Both hoped that people would look beyond this sweater and think about how the fast-fashion industry produces all its items, even if they’re not handmade.

Target has a previously stated public policy with regards to their supply chain, which can be read in full here. Observer reached out to Target for comment, asking what laborers were paid in the production of these cardigans, where they were sourced from, and if they sold them at a profit loss. After publication, Target spokesperson Courtney Foster emailed a statement: 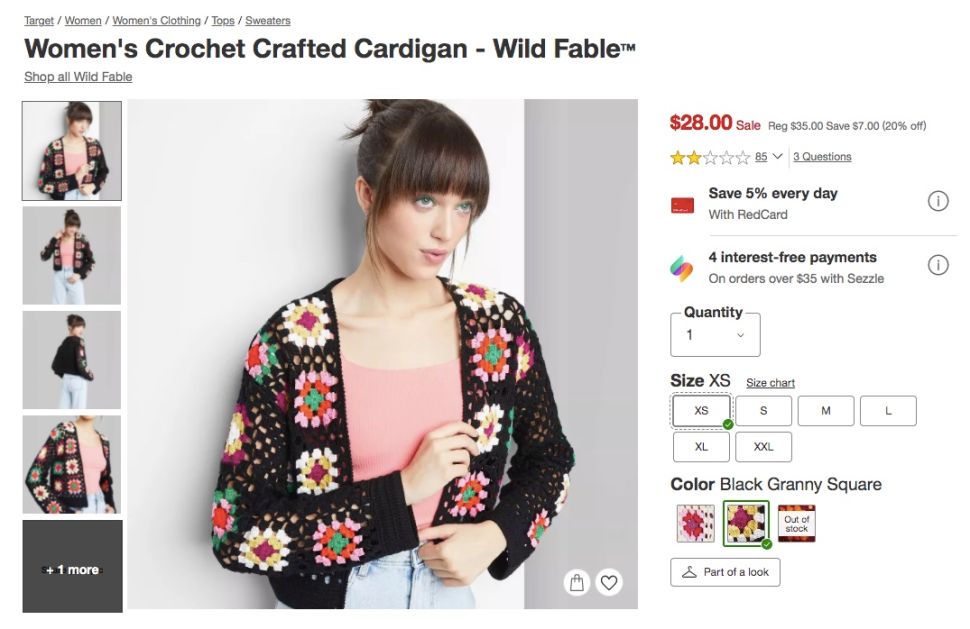