Nostalgia is a powerful force that’s only been gaining power over the last two years, as new experiences have been more and more limited and we’ve been stuck cycling through memories. As every generation ages, less and less entertainment is focused on us and our experiences—that’s natural—but right now no one knows how to market to current trends. So instead we fall back on the things we knew when our brains were still growing. As we hit two years of cycling back over old memories, it’s hard to not feel like every moment of prior fondness has been farmed to sell us a T-shirt, a tote bag, or tickets to a pop-punk festival.


A lot of this feels corny and forced, like a coffee mug about how you’d rather be drinking wine. What doesn’t feel hollow, though, is Jackass. The 22-year-old nut-shot powerhouse is releasing it’s fourth installment into theaters today, and I don’t know a single person who feels like the enthusiasm is forced. I considered writing a straight-up review, but I have no objective feelings about a franchise that has shaped so much of my stupid adult brain.

I saw the first movie in theaters twice: on my first date ever, then with my dad. The latter experience provided two of my most powerful memories with my dad. One was squirming when I realized I had to watch That Scene With The Toy Car with him; the second was when I turned to him as the credits rolled to ask what he thought. There followed a pause so pregnant you felt it enter its third trimester, and then Bob Millman rolled out the most carefully thought out response he could muster for his 15-year-old daughter.

“Sweetie . . . not that there’s a single thing wrong with it, but that was a lot gayer than I was expecting.”

This sentence has rattled around my brain in the years following, and I think goes to part of why there’s so much enduring power to Jackass. One of the franchise’s subtler messages was that it’s okay to be a little gay with your dudes, and the crew has acknowledged that their intent was to push back against the homophobia in the bro culture of the ‘00s. I’ve argued in the past that Jackass is one of the reasons culture got less homophobic overall, and will probably do so again.

There are a lot of wonderful things about Jackass Forever. The newer cast gets to shine, and they’ve happily broken the glass gutter and brought a girl back into the fold, comedian Rachel Wolfson. (Stephanie Hodge had to bow out of the franchise very, very early.) Jasper Dolphin and his dad Darkshark bring a tender glee as a father-son team getting freaked out by bugs and birds of prey. The joy Zack Holmes, Poopies, and Eric Manaka show in having a chance to be injured with their heroes is palpable.

The core happiness of Jackass Forever, though, is hanging out with old friends after some time apart. (Which, after the last two years, needs no further explanation.) These are guys we’ve been watching for more than 20 years. I’d know Johnny Knoxville’s laugh anywhere. Ditto Steve-O’s rasp, or Pontius’ baritone giggle. (I’m still dealing with how much I’ve seen Dave England go to the bathroom.) After 12 years away, it feels like a gross hug to watch Lance Bangs throw up again, and there’s a very familiar giggly warmth to watching Danger Ehren run away with the movie while enduring the gauntlet of a cup test. Jackass has always skirted the line between the dumbest thing you’ve ever seen and performance art—one of the most powerful examples is in the second installment, when Chris Pontius drinks horse semen after John Waters makes a cameo—but arguments for its merit as art falls to the wayside when you can watch it with your friends and laugh together over a classic tenet of comedy, someone getting hit in the nuts. At this point, we need all the hugs we can get, gross or otherwise. 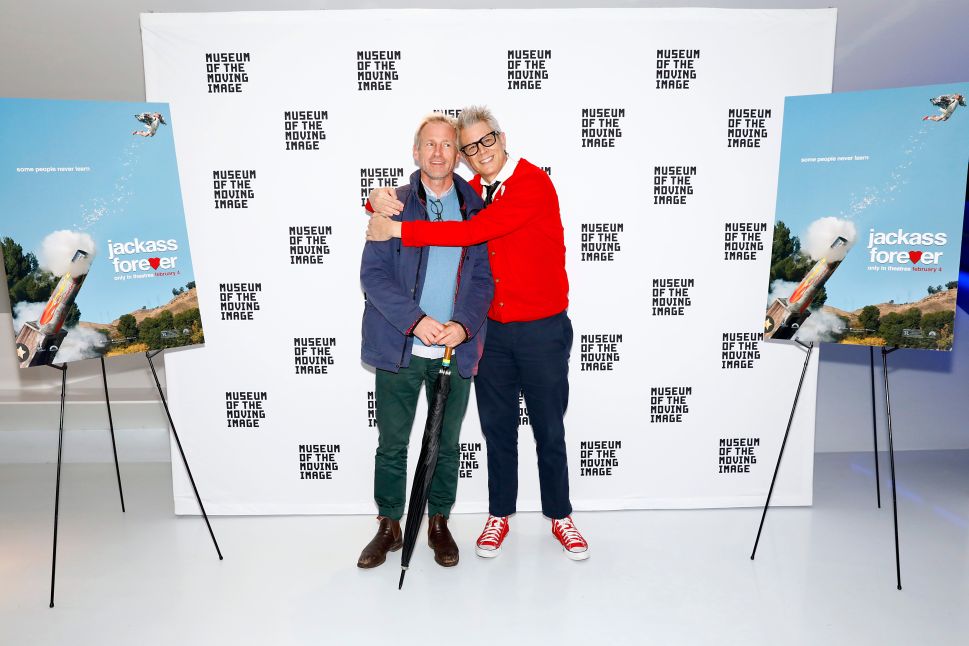