Sluggishly directed by Kenneth Branagh, the unnecessary remake of the 1978 film version of Dame Agatha Christie’s Death on the Nile is a curiously boring misfire. Having just returned from two weeks in Egypt, I can tell you the only thing they got right is the scenery. From the fabulous Cataract Hotel in Aswan where Winston Churchill spent his holidays and Dame Agatha wrote the 1937 novel from which the new murder-mystery movie has been poorly adapted, to the Temple of Karnak in Luxor, the ruins, pyramids, tombs and architectural treasures of the pharoahs have been gorgeously photographed. Everything else is as dead as the mummy of Tutankhamun.

The 1978 version was no masterpiece either, but it did assemble a spellbinding all-star cast that included Bette Davis, Angela Lansbury, Maggie Smith, Mia Farrow, David Niven, George Kennedy, Olivia Hussey, Jane Birkin, and Peter Ustinov in his initial appearance as Belgian detective Hercule Poirot, a role that became his trademark. In the new retread, director Branagh  also plays the leading role, without a trace of Ustinov’s charisma. He drags in so many new tertiary characters from the book who were wisely deleted from the 1978 screenplay by renowned playwright Peter Shaffer that it is impossible to tell one from another. Mr. Branagh is fond of prologues, as his slim, puzzlingly overrated memoir Belfast demonstrated, and to drag out the playing time, he’s got another one in Death on the Nile—a long and pointless flashack that shows Poirot as a young soldier almost fatally wounded by a mortar bomb while leading a Belgian squadron to blow up a bridge in World War I.  Why would anyone care about (or need to know) an aging sleuth’s military background when all we want is to see him solve crimes in glamorous circumstances.  The only glamour in Death on the Nile is the lavishly appointed Nile riverboat Karnak on which Poirot takes a vacation cruise, hoping for some rest and vintage cognac, but instead finds himself in the middle of the heinous murder of a rich heiress named Lynette Ridgeway (Gal Gadot), on her honeymoon with handsome playboy Simon Doyle (Armie Hammer).  Everyone on the boat is a suspect, in a roster that includes the murdered heiress’ best friend Jackie (Emma Mackey) who is hellbent on revenge after being jilted by Simon, the dead girl’s crooked doctors and lawyers who are out to steal her money, a French maid (Rose Leslie) with her eye on a priceless necklace, Angela Lansbury’s old role as a flamboyant and always tipsy old mystery writer named Salome Otterbourne has now been turned into a jazz singer (Sophie Okonedo) and don’t even ask me what Annette Bening is doing in a small cameo as somebody’s acerbic, bitchy mother. Maybe she craved a paid vacation to Egypt with no strenuous acting required.

There are too many subsidiary characters to mention, none more than marginally interesting. The endless dissections of this carnival of elegantly dressed lost souls occupy the first half of the movie, but the screenplay by Michael Green is so overblown that the film’s growing dullness seems inescapable. The film creeps along so slowly that it takes an hour and ten minutes to get to the actual death on the Nile in the title. The plot grows stark and obvious. The ending, in which the identity of the killer is finally revealed, is easy to guess. But it doesn’t end there. Mr. Branagh contrives an anti-climactic epilogue as a bookend to his prologue, with the jazz singer performing an inarticulate “Stand by Me”. 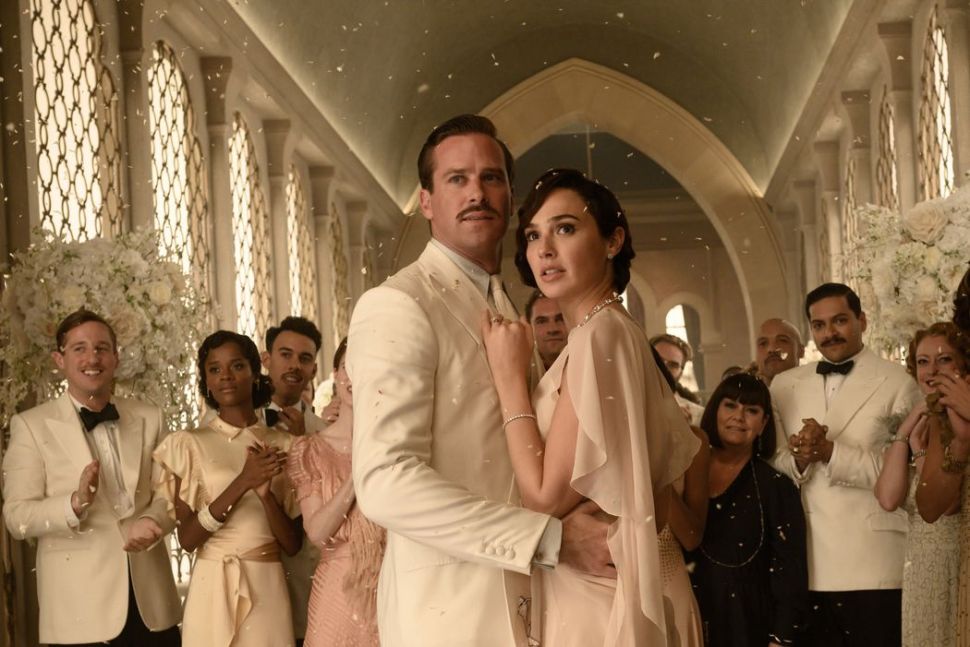