Native speakers in America take their labio-velar approximants (y’know, the “w” sound) for granted. Wow, weird, and whammy trip off our tongues, and pursed lips. But how treacherous the carefree consonant becomes for an Iranian trying to become an anglophone. Well becomes vell, and the effort to get the mouth to obey instruction can exhaust body and spirit. When ESL teacher Marjan (Marjan Neshat) has a blip of mispronunciation, she feels humiliated. Such cross-cultural tension looms over Sanaz Toossi’s English, an understated classroom dramedy about the things we lose in crossing linguistic borders.

Set in 2008 in Karaj, a city an hour outside of Tehran, the play keeps a tight focus on Marjan and four students preparing to take the Test of English as a Foreign Language (TOEFL): there’s neurotic medical researcher Elham (Tala Ashe); bubbly teenage Goli (Ava Lalezarzadeh); dryly arch grandma Roya (Pooya Mohseni); and mild-mannered Omid (Hadi Tabbal), a polite fellow who seems to be more advanced than the others.

Through a gently unfolding series of scenes demarcated by bits of jazz piano, we drop in and out of sessions to see how the pupils’ English comprehension is improving or leading to conflict—internal and interpersonal. Marjan is impeccably poised and nurturing to all, even the defensive and prickly Elham, who has failed the TOEFL several times already and admits, “I sort of lose my mind when I speak English,” and “my accent is a war crime.” To represent people toggling between tongues, Toossi uses a neat device: Characters speak English in a believably halting, stiff fashion, clunky grammar and all, but when they break into their native Farsi, their English becomes relaxed, loose, contemporary. In a second, we see tension melt out of their postures and faces, as if the act of speaking English brings mental and physical discomfort.

Characters in English wrestle with private dramas; the piece isn’t really driven by plot. Rather than artificially pump up drama by introducing an affair or, say, violence from an external force, Toossi charts the handful of emotional journeys with great sympathy and humor. If you expect Omid and Marjan’s post-class DVD screening of A Room with a View to lead to a steamy clinch, think again. The limited options for women in Iran is noted, but not dwelled upon. We track Roya’s unhappiness over a son in Canada who clearly wants to put his Persian past behind him. We follow Elham’s grim pursuit of a passing grade so she can get a job in Australia. Everyone has goals and obstacles. But there are no explosions, just lives of quiet desperation or, in the case of the underwritten Goli, quiet contentment. The biggest reveal comes with Omid’s history, and why he’s in the class (which I’m still not 100% clear on). I doubt that every student learning a foreign language undergoes such existential crises, but it makes for what drama the play offers.

Knud Adams directs with a firm caress, letting dramatic beats flow organically from an appealing ensemble. Marsha Ginsburg’s slowly revolving classroom set, bathed in Reza Behjat’s creamy lights, which filter through flowing, lemony curtains, creates an uneasy mixture of new beginnings (the classroom is neat and modern), and a bitter aftertaste of cultural erasure (this deracinated space banishes the local and ethnic). One of the final images of the play is Marjan wiping student names off the whiteboard. But what gets the final word? Farsi. 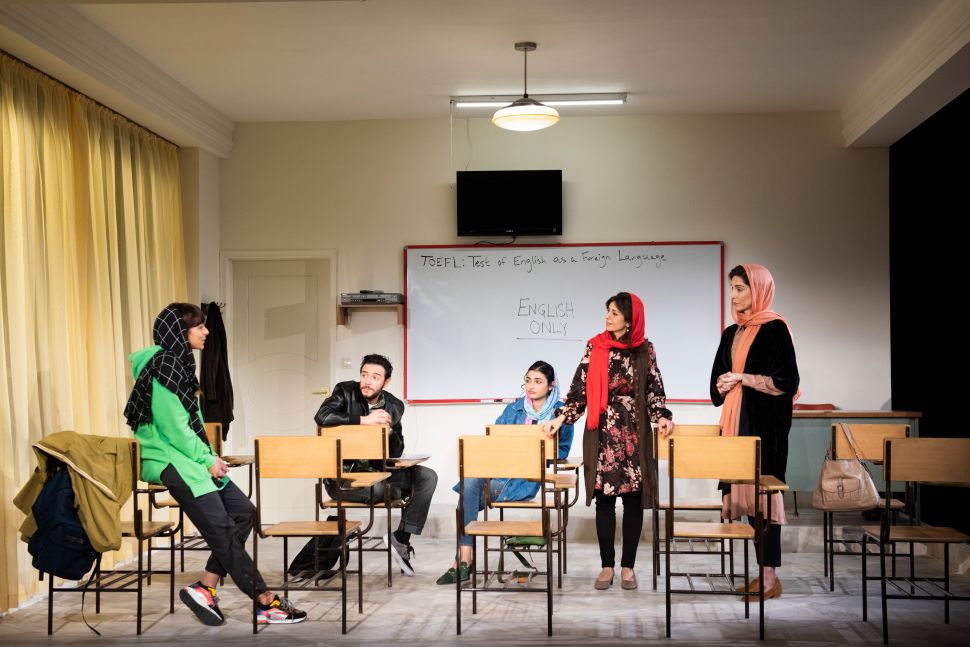