Jane, better known as @janeaugust on TikTok, always knew she wanted to live in New York. Born in Connecticut to two New Yorkers, her family soon moved to Arizona but was determined to return to the east coast as soon as she could. After high school, Jane moved to the city to attend Brooklyn College, where she studied technical theater and design. Once she  graduated, she started working in nightlife, but like everyone else, was furloughed in March of 2020. After nine months of staying in the house, she realized she wanted to take advantage of the time she had (and her unemployment insurance). In February 2021, she set out on an ambitious project––to visit every museum in New York City, and document it on her TikTok. Since then, she’s visited over 50 museums and built a substantial following on TikTok of those interested in following her adventures.

I spoke to Jane about the past year of museum visits, her favorite moments, and the TikTok community she has created.

Observer: Set the stage for me––what were you up to a year ago when you started to do this, and why?

Jane: In January of 2021, COVID-19 was really bad. They were saying ‘do not gather indoors with people.’ But after a year inside, I was like “I need to see people, I need to do something.” The things that were open were restaurants, which you have to dine inside if you didn’t want to freeze, and maybe you could go to the store. But I realized museums were open, and they were doing really good at social distancing. It’s a great place to social distance because it’s a large museum. Everyone is required to wear masks and there’s no time limit for you to be in there. I was like ‘where can you loiter with your masks on and learn stuff?’ Museums.

And so I was like ‘ok what museums are there?’ I didn’t realize that there was a whole lot. I was like ‘what if I visited them all? We could do that right? That’s an accomplishable goal.” So I started this project. I made this spreadsheet because that’s how I figure out information, and then I texted my friends like ‘hey I think I’m gonna do this. Do you want to do this?’ and they were like ‘ok.”

On February 19th or 20th, we went to our first museum. The following week, I posted my first TikTok about it. I had a TikTok page before but I kind of just posted stuff, little dances, me cooking something, because that’s what we all did during 2020. I made my first video of the series, the introduction, and it blew up. Suddenly I had something thousand followers, people messaging me, and we went with it.

Fast forward to now, you’ve now been to over 50 museums. What have you learned so far?

I love knowing stuff. My friends make fun of me because I love knowing everything. I love New York City. I’ve switched through so many career paths and I realized, through this project, that the one thing that has tied them all together is New York City and the arts and culture scene. New York City is really at the heart of my life. I’ve learned so much history. I’ve learned so many things I didn’t think I’d ever learn. You also learn how history is told differently. Especially in New York City, where everyone is pretty liberal, you’d think they all tell the same stories but it’s very interesting as to how it’s different. Museum of Reclaimed Urban Space, which I love, they tell a very activist view of how things changed and evolved in New York City. It’s neat, all the different perspectives there are.

What have been your favorites and what museums have stood out to you the most?

I think I have about four right now. The Museum of the Moving Image, which is like the movie and TV museum in Queens. So much fun. New-York Historical Society I loved. You look at the outside, the fonts, and the name ‘New-York Historical Society’ and you think it’s going to be kind of like an old people museum in a sense, which is a generalization of “museums, history, boring” but then you go in and it’s really hip and there are interactive exhibits and they have all the Tiffany lamps and trains. It’s really fun. I loved Poster House, which wasn’t originally on my museum spreadsheet. Some of them we find because people comment. Poster House is an art museum about the art of posters, so communication, and design. That one was very cool because I love posters. And then the Museum of Reclaimed Urban Space, which is a totally different museum. There’s a community garden nearby, and we really learned a lot about the people who live in these spaces and how they reclaim space from the city. That was neat. We went to the Nicholas Roerich Museum, which is an art museum about this Russian philosopher and painter. He had all these really gorgeous paintings, and I didn’t know this museum existed really. It’s hidden away on like 107th street. That’s one of my favorite art museums so far.

How do you decide which to visit, and when?

Part of the project is that I always go with a friend because I need someone to help me film but also I have someone to talk to about it and experience the art. I think going to museums by yourself is fun, but when I can take a friend, it’s a little hangout too. So I hit up a friend. We chose a day. We always start with the day someone’s free. Then we go to the spreadsheet, I have organized with name, type, neighborhood, days open. We sort it by the days it’s open and that’s kind of how we choose. Or, if one of my friends wants to go to a certain museum, we’ll see which days we can go. Usually, it’s about scheduling. I have to go to them all so I don’t care when I go to which ones.

I then reach out to the museum because you always want to ask before you show up because sometimes there are clearances we’ve got to get to film videos. There are some artworks that have copyright things. Sometimes they’re excited for us to come and they give us a tour. I reach out, and we arrange it from there. And then we go, I edit the video, and then it gets posted.

In one of your videos, you talk about sending postcards. Who do you send postcards to?

I love postcards. Even before the pandemic, I was big on writing letters, just because the art of letter writing I love. When we started, we went to a museum and they had free postcards and I was with my friend Jesse and I was like ‘hey, can you send me a postcard from this museum, I’ll send you one.” So we’re sitting at dinner, writing each other postcards. I always send them to whoever I went to the museum with. I always send one to my mom, and to my friend who lives in London….I always get a postcard back because whoever I go with, they send me a postcard… Postcards are kind of my souvenir. I’ll have a whole stack of all the museums in New York City, which is very exciting.

I’m from DC where museums are free, but NYC museums aren’t, and going to hundreds of them can’t be cheap. How do you finance this, and how can people help?

Usually when we reach out to the museum, we ask if we can get complimentary admission. Most of these places are nonprofits and lots of times they have lots of programs in New York City to get into museums for free like New York City Culture Pass and IDNYC. They usually will grant us complimentary admission but I also have my Venmo and my Cashapp on my spreadsheet that people can Venmo me if they want to support the cause. The museums have been very into the project and very willing to help, which has been really nice.

You share most of this content on TikTok––what made you decide to do that? How does this contribute to making museums more accessible?

I spent a lot of time on TikTok during the pandemic, like everyone, and the short-form video was really interesting to me…There were a lot of cool things happening on New York City TikTok. TikTok is really good at sending stuff out to people. It’s a really good discovery tool. Instagram hadn’t really started doing reels yet and YouTube hadn’t started doing shorts yet so TikTok was the only place for short-form vertical video.

You have a good number of followers on your TikTok––what kinds of feedback/interactions do you get from people?

I have a really good community of people on my TikTok account. When we talk about numbers on social media, everyone is trying to tell you your number is too small. When I only had 7000 followers I was like ‘I only have 7000 but this person has 100,000.’ I work in venues so capacity and venues is how I picture space, and 7000 people is more than can fit in Radio City music hall. When you picture that, how many individual people there are, it’s really wild. Right now I’m almost to 20,000 followers which is “not that big” compared to other people but I’m like “that’s enough people to fill Madison Square Garden.” The fact that 20,000 people decided that my content is worth even a minute of their time each day means a lot. People come back and are fans of the project and you’ll see which ones comment on every video. Some will comment “I went to this museum and I really liked it because I saw your video.” It’s very rewarding that I’m making a little impact on someone’s day by influencing them to go somewhere cool. Some people will be like ‘I want to do this now.” There are these two girls, I think they live in Illinois, they’re like ‘we’re going to visit every state park in Illinois.” They were inspired by the series, which is cool.

What museums are you looking forward to visiting next?

We’re eventually going to go to the Tenement Museum. That’s the most requested one. Historic House Trust recently gifted me a membership, so I’ve been going to those. We went to the Merchant’s House Museum, which was so cool. I’m excited to see the other historic houses. There are some I’m excited to open. The Museum of Broadway is supposed to open this year.

Do you have any plans to celebrate the one-year anniversary of this project? 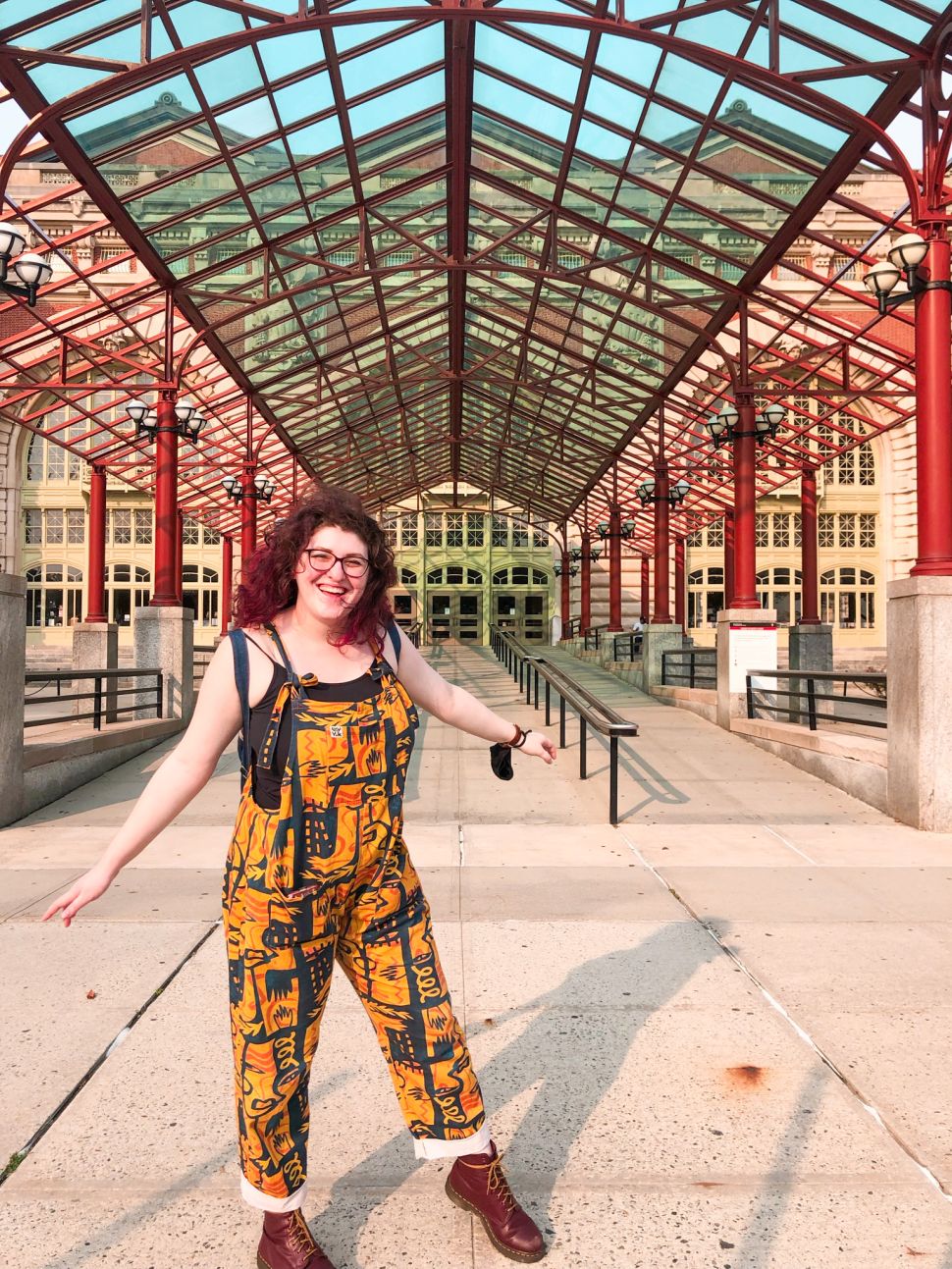