PRISM Quartet, founded in 1984, is a new music saxophone ensemble whose sound can hauntingly recall pre modern choral music. Their Mending Wall, a fully staged production of music, poetry, and light, made its New York City debut Monday, February 14, at Roulette in Brooklyn. Originally meant to be staged in March of 2020, the Philadelphia-based ensemble had to postpone the performance for two years. Dutch opera director, Jorinde Keesmaat, has rethought and restaged the production to re-encounter our new historical era. Matthew Levy, PRISM’s co-founder, has stated, “Mending Wall began as a response to the symbol of a wall as a dehumanizing force during America’s recent zeal for wall-building.”

The production consists of four pieces by four different composers, working from the themes of walls and boundaries, and inspired by four separate poems. The pieces were, in order, “Unsung Lullaby” by Juri Seo, inspired by the poem “Echo Chamber” by Waly Salomão; “Mending Time” by Martin Bresnick, inspired by Robert Frost’s “Mending Wall”; “Where Her Eye Sits” by George Lewis, a setting of “This Way I salute You” by Keora-petse Kgositsile; and “Something to Declare? (Yeah, Fuck Your Wall)” by Arturo O’Farrill, inspired by “Freefalling Toward a Borderless Future” by Guillermo Gomez-Peña.

The performance is named after Robert Frost’s, “Mending Wall,” a poem that portrays two neighbors rebuilding a stone wall that has broken down between their two properties. The poem’s speaker, with an airy poetic sensibility, muses on that “something there is that doesn’t love a wall” and yearns for a spiritual union with their frosty neighbor. The poem, like the musical performance, has a wide open metaphor that illuminates barriers—between self and other, body and spirit, sound and silence—outlining a space where art itself exists: where we intimate a reconciliation between contradictory possibilities. “What if the walls between us were made of music,” composer Martin Bresnick writes in the program notes of his composition, “Mending Time.”

Given the seriousness of the material, its grounding in immigration, borders, separation, and the division of communities, the appearance of PRISM in matching Andy Warhol wigs, their suit jackets bulked up with shoulder pads, making them look like Peter Boyle in Young Frankenstein, came as something of a surprise. PRISM plays wonderfully strange and difficult pieces that are steeped in heady matters. Yet they performed with the zeal and puckishness of an improv troupe. The production deliberately showed the awkwardness of new music performance itself, and leaned into that awkwardness—doing what avant-garde performers so often wish to do but frequently fall short of: giving the audience a genuinely new experience that challenges their assumptions of what music and performance are.

Throughout the production, performers wheel two metal gates, their bars made of LED lights, around the space. Sometimes, as in “Unsung Lullaby,” the performers position the gates so that they obscure themselves from the audience. Aaron Copp’s lighting design, his LED gates, spotlights, and blocks of bright interrogation room white light, have that same quality of seriousness and whimsy as PRISM’s performance. Accompanied by composer/pianist Arturo O’Farrill, and soprano Tony Arnold (also in wigs and Frankenstein suits), the production manages, in a small space and with a handful of tools, to make something that feels large—filling the space with arresting visuals that meet and match PRISM’s soaring saxophones.

The small theater was an ideal setting for PRISM, where an audience in close proximity feels the reverberations of the brass line. They performed with the technique and finesse of classical musicians, while projecting the intimacy and playfulness of a Balkan wedding band. The sped up mischievousness of Arturo O’Farrill’s “Something to Declare (Yeah, Fuck Your Wall),” the closing piece in the series, took particular advantage of PRISM’s ability to stop breath and raise goose pimples. According to the program, O’Farrill was inspired by the Mexican genre of Son jarocho, where a lead voice is accompanied by half a dozen stringed instruments. This form is practiced on the San Diego/Tijuana border, where musicians gather on either side of the border fence to jam together. They play in a festival called the Fantando Fronterizo, in which the lead singer improvises politicized anti-border verses, and encourages the crowd to join in. O’Farrill’s piece, like the Fantando Fronterizo, is a celebration taking place inside a crisis. It is an emergency you can dance to. The jazz musician and founder of the Afro Latin Jazz Alliance, takes the sax quartet for a wild ride. With PRISM’s anxious, leaping pitches chasing after one another, O’Farrill breaks and swerves the production to a landing, ending an evening of uncanny, brilliant work with a flourish.

“Mending Wall” is a packed 70 minutes of extremely good music. It contains no end of invention. In Juri Seo’s opening work, her “Unsung Lullaby,” the ‘lullaby’ melody takes one into a dreamscape: a space that soothes and alienates, by turns, like signals from the slumbering unconscious. Bresnick’s “Mending Time,” which uses the entirety of Frost’s poem, spoken by Tony Arnold, uses acting and dramatics, narrativizing the poem in a playful call and response with the quartet. Lewis’s “Where Her Eye Sits,” was inspired by the work of a post-apartheid poet laureate of South Africa, and according to the program, evokes traditional South African “Mbube-like orchestration.”

PRISM, together with Tony Arnold as soprano and O’Farrill as pianist, gave to the evening a fullness of sound, theatrics, and charisma that show how accessible and exciting new music can be when powerful artistic choices are made. Jorinde Keesmaat’s rich, playful, and uncanny production is ideal for our re-emergent performing arts: something authentically different for our authentically different era. 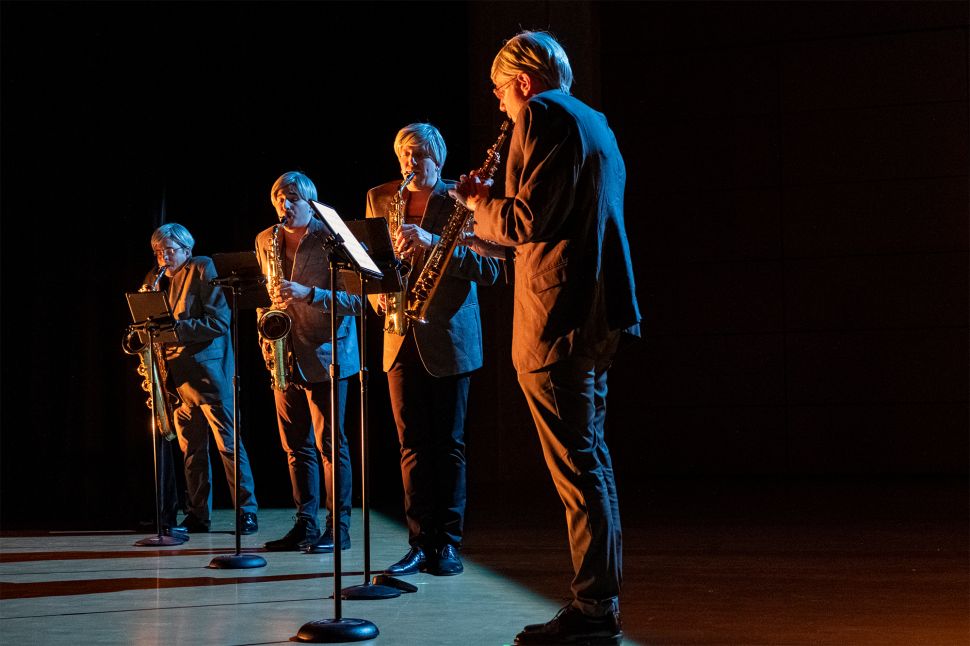