This week I spoke with 26-year-old model and content creator Remi Bader (2.1M, TikTok). Bader turned a lost job and issues she identified within the fashion industry into a new career on social media.

In July of 2020, Bader was laid off from her job in partnership marketing at the then Jay-Z-owned streaming service TIDAL. She signed with a curve modeling agency before getting her start on TikTok in September 2020, making videos about fashion and body positivity. Her signature “realistic hauls” videos are looks at how clothes fit on models and how they fit (or don’t) on her. She’s funny, self-deprecating, and serious in ways that have connected big time.

Bader said the realistic hauls have allowed her to pose a question to her audience: “Why are we blaming ourselves when a lot of these fashion brands, most of them just aren’t inclusive yet? And it’s such a struggle for people like me to shop.”

It’s a topic she’s been contemplating for a while, though. Bader’s father works in women’s jeans and Bader held internships that exposed her to the fashion industry where she realized that there weren’t people who looked like her on the runway.

“And I was like, maybe this isn’t the industry for me,” she said. “Maybe I should change over and try and get a job when I graduate college in entertainment and PR and marketing.”

After working at NBCUniversal and TIDAL, Bader’s social media presence landed her back in fashion. Last year she partnered with Aerie and has just announced a new partnership with Victoria’s Secret Pink.

Bader’s role at Victoria’s Secret Pink, the company’s line for young women, is as a size consultant and brand ambassador. Having retired the Victoria’s Secret Angels in the face of declining sales — as well as revelations about its culture of misogyny — along with VS founder Leslie Wexner’s ties to Jeffrey Epstein — was exposed, Victoria’s Secret has been rebranding in an attempt to catch up to the culture of body positivity. One of the first changes that accompanied Pink was the launch of XXL-sized swimwear — a step toward size expansion.

“I don’t believe that we should cancel brands if they’re now trying to make a difference because you’d be surprised at how many brands and companies just aren’t even making the slightest effort now to do so,” Bader said in response to my question about Victoria’s Secret’s complex history.

Bader said her role will involve testing apparel pre-production, expanding their sizing, and mentoring campus representatives around the U.S.

“I also worked in fashion and on the other side and people don’t realize that it does take time for huge companies to do this,” Bader said. “So the fact that they’re even doing one little thing now, it shows they’re gonna make a change and I’m not gonna just hold against them, what these people that are no longer with the company have said in the past.”

Bader noticed the creators she was following had signed with United Talent Agency, so she set her sights on UTA. “I kind of pitched myself to them,” she said — although she added, agents more often approach content creators.

She messaged UTA employees on LinkedIn until she got a response from one of her current agents about two days later. Now she’s built a full team: Agents at UTA, a manager, an attorney to assist with brand deals, and most recently publicists.

While she was unsure about hiring a lot of people to help grow her business, Bader has seen how useful and productive they have been. For one thing, they offer both support and knowledge. “I went to a fashion show the other day,” Bader said, referring to Prabal Gurung’s New York Fashion Week show. “I wouldn’t know to take pictures and do things with certain people. I would just walk in and take a seat.” But her team helped her understand this was a moment to capture content that could not just generate a response, but further her message.

Bader posted a video of the show with text overlaid: “Did you ever think you’d see a plus size model on the runway and a plus size queen sitting front row of new york fashion week?”

“It’s all brand deals,” Bader said when I asked how she makes money as a creator.

For many influencers now, picking the right opportunities is crucial. Bader said she’s very intentional about the brands that she chooses to partner with.

“I’ve shut down some pretty big deals just because I just didn’t feel like it was right and authentic to me,” she said. “And that’s the way I work.”

Bader said that she still buys all the clothes herself for her realistic hauls, though. She also mentioned that she used to approach brands she enjoyed on her own. Now her team does a lot of the work for her, and brands seek her out on their own.

In terms of other brands she admires, Bader mentioned Kim Kardashian’s company Skims. She also said she is a fan of Khloé Kardashian’s Good American, which she has done a partnership with in the past.

“I think it would be a dream for me to model with a Good American or Skims,” she said. 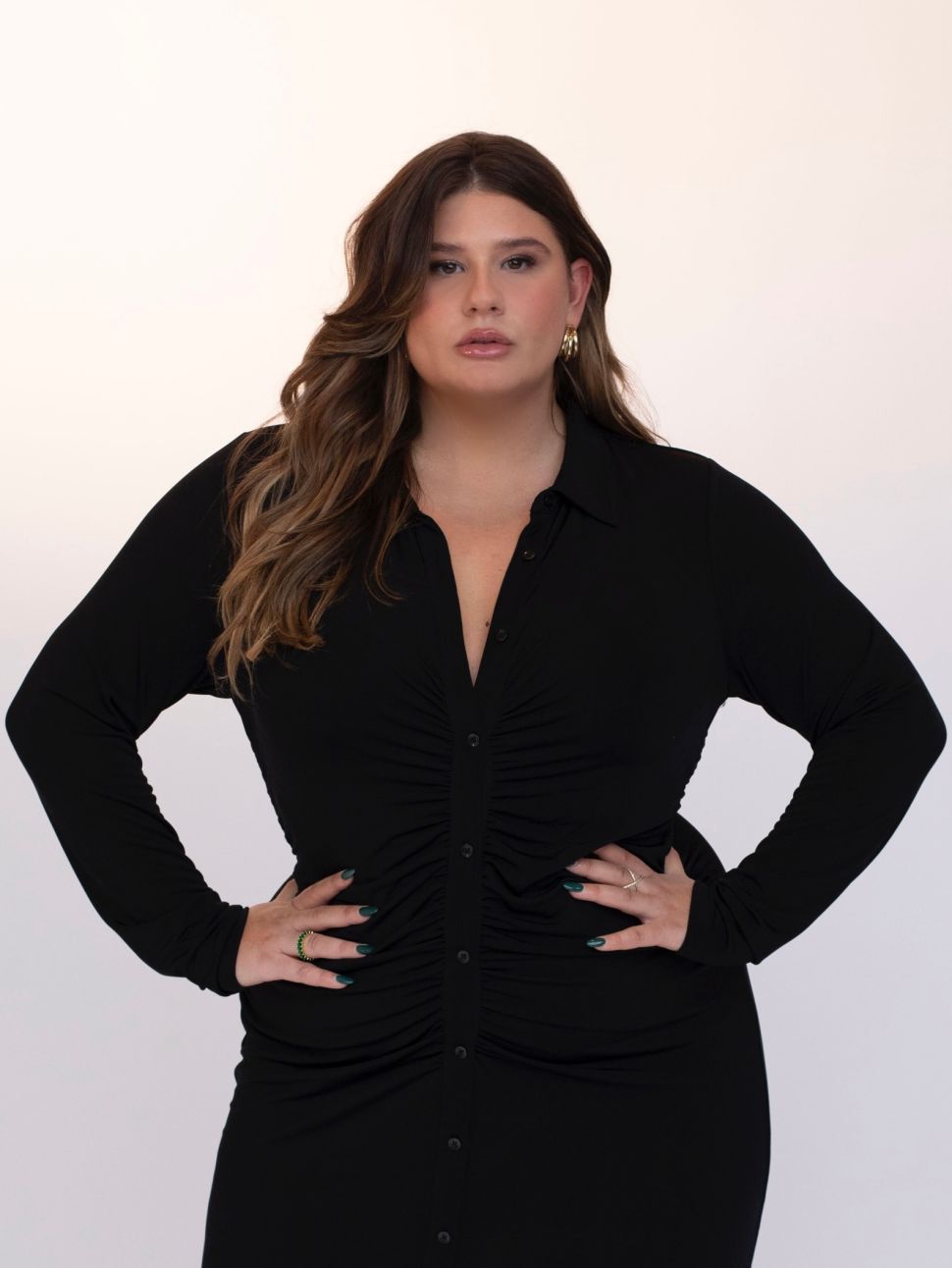