When She-Ra and the Princesses of Power arrived on Netflix four years ago, it was more than just a cartoon — it was a milestone. A reboot of the 1985 series She-Ra: Princess of Power, the 2018 adaptation featured a diverse voice cast, characters of many genders, races, and sizes, and (notably) more than one casually queer relationship. It took the cheesiness and camp of the original and transformed it into a story that was radical, although no less glittery, sprinting down the trail blazed by earlier, groundbreaking animated shows like Adventure Time, Steven Universe, and Avatar: The Legend of Korra, all off which gave representation to people and experiences too infrequently depicted onscreen.

When the show ended in May 2020, the finale confirmed that protagonist Adora (Aimee Carrero) and antagonist Catra (AJ Michalka) were more than just friends-to-enemies-to-friends. They were in love. Showrunner ND Stevenson’s decision to canonize fan-led ship Catradora — a pairing the audience had both longed for and doubted would come to fruition — was met with overwhelming praise from reviewers. It was a bold, crowd pleasing choice made by a show that had built a reputation for its subversiveness and inclusivity. As Autostraddle proclaimed, it gave “the gays everything they want.”

But after watching Catra brutalize Adora for four and a half seasons, the show’s celebration of the characters’ sudden romance felt jarring, even troubling. Catradora was the pairing many fans wanted, but was it earned?

Adora and Catra’s often toxic bond was the backbone of the show from the jump. The series begins with the two young women as soldiers in the Fright Zone, territory occupied by the oppressive, intergalactic Horde. On a joyride outside the Horde’s borders, Adora discovers that she’s been fighting for the wrong side (as if “Fright Zone” wasn’t a giveaway), finds a magical sword, and transforms into mythical hero She-Ra. When she defects from the Horde and joins the rebellion, Adora begs her friend to come with her, but Catra refuses and lashes out: “You left me.” From then on, as in the original 1985 series, the two are enemies, with Catra channeling all of her energy into crushing the rebellion. In the reboot, though, Catra doesn’t truly believe in the Horde’s sinister ideology — she just wants revenge.

Over four-and-a-half seasons, Adora and Catra’s relationship continues this way. Then a switch flips: Catra joins the rebellion, quickly gains the princesses’ trust, and she and Adora live happily ever after.

If you’ve ever consumed fanfiction, read romance, or watched a teen drama, you know that watching two characters start off as enemies and gradually grow to like each other can be satisfying. Think of Elizabeth Bennet and Mr. Darcy in Pride and Prejudice or Leslie Knope and Ben Wyatt on Parks and Recreation. Well-written conflict can be sexy. But when does the enemies-to-lovers trope cross a boundary and become abuse?

Throughout the series, Catra repeatedly insults Adora, targets her friends, tries to separate her from her support systems, and literally attempts to murder her. And these aren’t strangers who loathe each other based on their oppositional allegiances. Catra’s violence toward Adora isn’t circumstantial — it’s targeted and personal.

Over the course of the show, audiences learn why. Catra and Adora’s responses to conflict are the product of the abuse they experienced growing up in the Horde. Shadow Weaver (Lorraine Toussaint), a powerful sorceress and a surrogate mother to the two, repeatedly pit them against each other, telling Adora she was special, chosen, and that Catra was bringing her down. As a result, Adora has a savior complex and Catra is obsessive and jealous.

This is an explanation for Catra’s behavior, not an excuse for it. A trauma bond is not the same thing as a loving partnership, and the series doesn’t really give Catradora a chance to form one. The bulk of the show sees Catra spiraling even further into darkness, not out of it, and there aren’t moments of kindness between her and Adora that suggest the possibility of rekindling a friendship, much less falling in love. In a 2020 interview with Collider, Stevenson acknowledged this: “There’s a lot of seasons where things get really rough between them and there’s not a lot of positive interaction to go on.”

Stevenson explained in another interview with Gizmodo that they were nervous the studio wouldn’t let her portray Adora and Catra as lovers. She-Ra was a beloved legacy character, and the original series was a children’s cartoon. They say, “My big fear was that I would show my hand too early and get told very definitively that I was not allowed to do this.”

That fear may be why She-Ra doesn’t give much space for Catra’s growth until the eleventh hour. Adora and Catra go from duking it out to professing their love so quickly it feels like whiplash. And it must be noted that even after the main characters admit their feelings to each other, Catra still isn’t . . . nice. (Adora: “You love me?” Catra: “You’re such an idiot.”)

Except Stevenson has said that they always imagined the two together. The romance was “the necessary conclusion of each character’s arc, separate and together,” they told Gizmodo. This suggests how the show intended for audiences to understand Catra’s behavior: She was so terrible and cruel to Adora because she loved her, obviously.

“He’s mean to you because he likes you” was once a common refrain used by teachers and parents observing children on elementary school playgrounds to excuse (generally) boys’ aggressive behavior toward (usually) girls. But this logic is problematic, both in real life and onscreen, and today audiences view famously volatile fictional couples like Spike and Buffy, Chuck and Blair, and Bella and Edward more critically than they once did. There’s less tolerance for media that romanticizes abuse or dysfunction, from movies about good girls “fixing” bad boys, to TV shows centering women who become enamored with their captors.

And this doesn’t just apply to straight couples. Viewers were furious about the ending of 2020 holiday flick Happiest Season, in which Abby (Kristen Stewart) ends up with her lying girlfriend Harper (Mackenzie Davis), rather than Riley (Aubrey Plaza). According to audiences, Harper didn’t deserve Abby after the way she treated her.

In contrast, She-Ra’s OTP was relatively uncontroversial — Catra got a pass. She was a complicated character yearning for connection, yet pushing people away. Many viewers felt affirmed to see a young, queer woman make mistakes, work through trauma, and still deserve forgiveness and love. But She-Ra ultimately sacrificed the show’s central focus on Bow (Marcus Scribner), Glimmer (Karen Fukuhara), and Adora’s complex, messy, loving friendship, to rushedly uplift a toxic romance.

Representation shouldn’t be confused with endorsement. However, in pairing Catra with Adora in the final episodes, and portraying this as a victory, the show almost sanctions her behavior. It says: You can treat someone this way and still be a viable romantic partner without first making deep amends. Redemption may be possible (just ask Firelord Zuko), but it takes time that Catra wasn’t given. 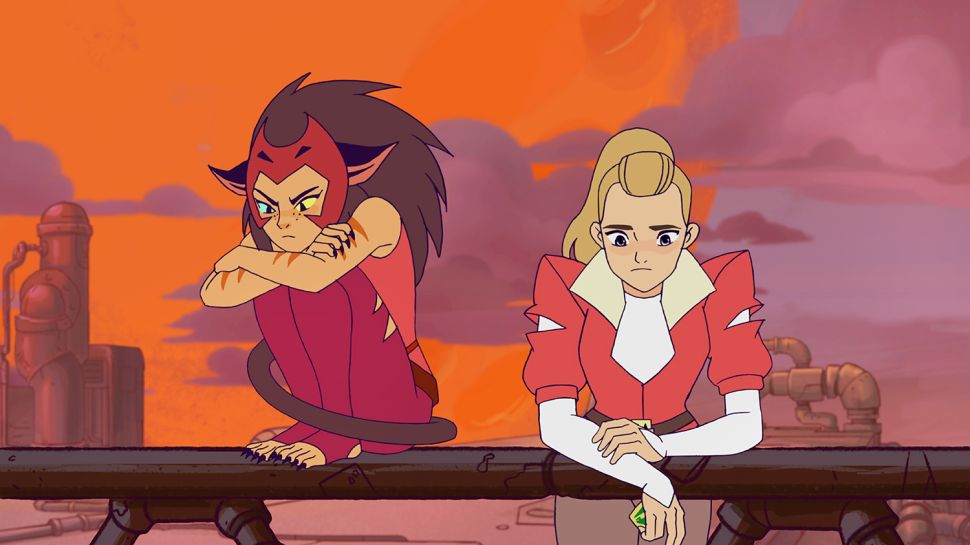